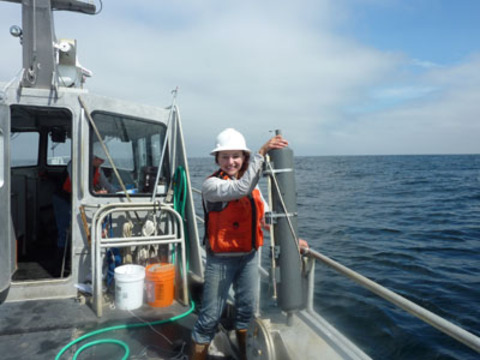 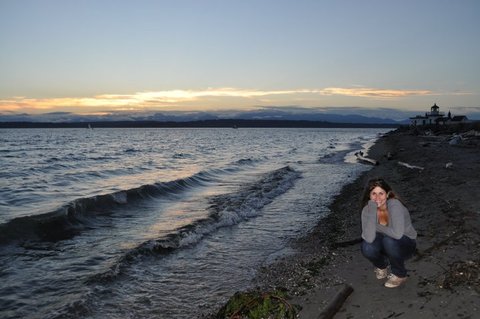 ASLO is returning to the "Big Easy" for the first time since 1990!  The Aquatic Sciences Meeting will be held on 17-22 February 2013 in New Orleans.  Under the theme "Learning for the Future" the meeting brings together scientists, engineers, students, educators, policy makers and stakeholders to look to the future of aquatic sciencs.  Many UW Oceanography students will be presenting their research.

Gwenn's research interests investigate how increasing carbon dioxide levels in the atmosphere will affect the physiology and gene expression of diatoms and the biological pump. Phytoplankton, including diatoms, have evolved to cope with relatively low CO2 by developing carbon concentrating mechanisms (CCMs). Now as CO2 levels are rising rapidly, these CCMs may down regulated, changing the fluxes of energy and carbon in diatom cells. I am interested in how diatoms will acclimate to higher CO2 levels and if there will be significant physiological changes that could effect the biological pump and ocean ecology.

Kirsten is a PhD student whose research is on harmful algal blooms (HABs), more commonly referred to as “red tide.” HABs are caused by a variety of toxin producing marine algae that can negatively impact ecosystems and human health when present at sufficiently high concentrations in the environment. The natural and economic resources of Puget Sound are threatened by periodic HABs; it has been hypothesized that recent changes in climate may be a contributor to increases in HAB outbreaks. As such, HABs may serve as the quintessential “canary in the coalmine” for coastal ecosystems. Understanding the effects large-scale climate variability and local environmental conditions have on HAB populations could help predict impending changes in coastal ecosystems and those resources that depend upon them.

Helena's research  is focused on the patchy distribution of organic matter in world’s oceans and ways that this pattern dictates the distribution of heterotrophic bacteria. Dead phytoplankton or zooplankton are bacterial hotspots, but may be quickly consumed by larger grazers or sink out of the photic zone and away from future sources of carbon.

Sara has spent lots of time in the laboratory on individual diatom species, as well as embarked on several research cruises off of central California, Oregon, Washington and Vancouver Island to interrogate diatom nitrogen metabolism in diverse nitrogen regimes.  Her goal has been to identify and quantify transcript abundances for molecular markers of diatom N metabolism, including responses to different nitrogen sources and responses to different degrees of nitrogen availability. Ultimately, these molecular markers will be used as part of larger metatranscriptomic datasets to monitor changes in diatom N uptake and N assimilation in the field.  Her research is motivated to address the overaching question: "How does nitrogen availability affect diatom physiology and in turn, how does diatom physiology impact the marine environment through the drawdown of nitrogen"?

Jaci is interested in how the marine cyanobacterium Prochlorococcus responds to dynamically shifting nutrient concentrations in the environment. Prochlorococcus is the smallest known oxygen-evolving photoautotroph. However, the smallest photoautotroph is also the most abundant photosynthetic organism on the planet and has been reported to account for 13-48% of gross primary productivity in nutrient-poor oligotrophic oceans. Oligotrophic oceans may experience climate change related increases in nitrogen fixation and subsequent phosphorous limitation; Prochlorococcus likely has a competitive advantage over larger eukaryotic phytoplankton in these phosphorous limited regions which enables them to be the dominant primary producer.  Her research focuses on how changing nutrient conditions impact Prochlorococcus, and how the response by Prochlorococcus may impact global biogeochemical cycling.