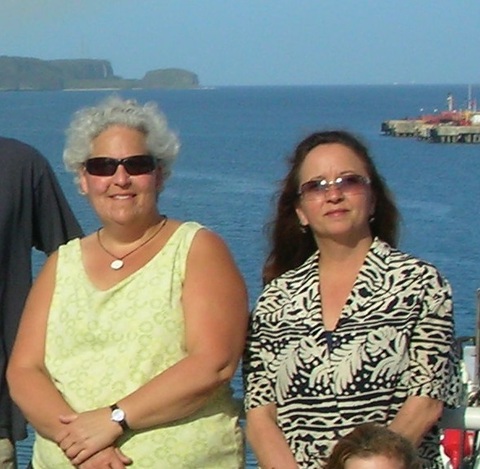 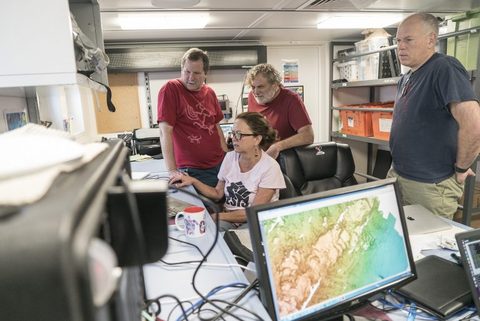 This is my final story as the UW School of Oceanography communications intern.   This interview highlights the stories of two female UW Oceanography graduates who became lifelong friends.  Susan Merle and Sharon Walker have amazing stories from many years working for NOAA and traveling the world together.

Susan is a seafloor mapping expert for the Earth Ocean Interactions (EOI) program.  She manages and analyzes many large databases from cruises all over the world, and she also assists with remotely operated vehicles and autonomous underwater vehicles on their dives.  Currently, she is using seafloor and acoustic water column data to locate and understand methane emission sites on the Cascadia margin.

Sharon works at the Pacific Marine Environmental Laboratory (PMEL).  She studies the factors that influence where and when hydrothermal vents are found.  She helped develop a small instrument to measure hydrothermal activity and manages the data that comes back from these instruments.  She also recently published a paper describing the distribution of ash around underwater volcanoes, and has been using Susan’s maps to identify relationships between the bubble plumes in Puget Sound and either the shallow fault system or the deeper subduction zone underneath them.

What initially inspired your interest in oceanography?

Susan - I grew up in Wisconsin and went to college there for a couple years.  I couldn’t decide what I wanted to be when I grew up so I did some travelling and ended up living near the ocean in Florida and then Alaska.  I wanted to commercial fish when I was in Alaska, but a fisherman friend asked me what a gal from the Midwest knew about the ocean? I realized – not a lot, so I went back to college in my late 20’s in Juneau Alaska, studying ichthyology. I eventually moved to UW to study oceanography because I preferred to know more about the ocean than just the zoology that deals with fish. I decided on a degree in Oceanography with an emphasis in marine geology and geophysics, because I realized while attending UW that I also love geology!

Sharon - I’ve always been interested in science, and how the natural world and all ecosystems work, my favorite when I was young was the beach.  I loved the idea of exploration and discovery and I really wanted to be an astronaut – that was just starting to be an option for women in the late 1970’s, but not for women who didn’t have perfect eyesight! I had to find another path that was more accommodating.  It’s hard to really like science but not know what kind of science you like best. The interdisciplinary aspects of ecology and oceanography really appealed to me. My mother’s concern was that I “needed a skill I could fall back on”, so I tried an applied science track (physical therapy), but a professor in my program scolded me for asking questions (“Why do you want to know that?! Just memorize what I give you”), at which point I just knew that wasn’t for me. My father was a physicist who studied ocean acoustics so I had an early exposure to issues related to oceanography.  Remembering my conversations with my father, and his insistence that there were still many, many things left to be discovered, especially about the oceans, I decided that oceanography would be a good fit for me. I wasn’t wrong. And, of course, Jacques Cousteau – I never missed an episode!

Susan - How did you become the sea floor mapping expert for the NOAA Earth Ocean Interactions (EOI) program?

My first professional job was in Seattle with a company that performed seafloor surveys for primarily fiber optic companies.  They needed a route for their trans-oceanic cables, preferably an undisturbed seafloor with few features to damage the cable. I learned my survey and data processing skills with that group.  Over my decades working for the NOAA Vents program (which eventually split into 2 groups, Acoustics and EOI), I was able to build my skill set. The seafloor, and now acoustic water column mapping, that I have undertaken with this group has unveiled some extraordinary seafloor features like underwater volcanoes as well as hydrothermal and methane vent locations.

Sharon - How did you become the water column expert for the Earth Ocean Interactions Program at Pacific Marine Environmental Laboratory (PMEL)?

The precursor to the Earth-Ocean Interactions program was the NOAA VENTS program, which began around 1984. At that time, CTDs were typically used to do vertical profiles, ignoring the data acquired during the up-cast. That is still the best practice for some types of studies, but plumes from hydrothermal vents along mid-ocean ridges tend to be within a few hundred meters of the seafloor.  Completing a series of full vertical casts to map plume distributions would waste a lot of time waiting for the CTD to pass through water depths that weren’t of interest. By lowering the CTD to the seafloor, then raising and lowering it through the bottom ~300 m of the water column while moving the ship along a predetermined path (based on the critical information provided by Susan’s maps!) we could acquire a “cast” about every 500 m or so. However, this technique presented challenges for knowing exactly where the CTD was at all times and other aspects of managing and analyzing the data. I was focused on CTD operations, plus I had programming skills, so I lead the development of the software needed to support that work.  I gained a thorough understanding of the instruments, sensors, sampling strategies and techniques, and the challenges of field operations. My contributions have included efficiently and accurately detecting and mapping plume signals, which is often the first step leading to many of our fantastic discoveries.

How has your time at UW impacted your career and do you have any advice for current and prospective UW Oceanography students?

Susan - I think being an undergraduate research assistant with Paul Johnson at UW impacted my career the most.  He helped me get on my feet and I was able to enjoy a few seagoing expeditions with him and his group, so I had a bit of experience when I graduated.  That made it easier for me to get that first job, and he also gave me a great recommendation for my present research job. So, I would advise getting as much hands-on experience as you can before you graduate.

I also think it’s important to try to keep your eye on the prize, and don’t let yourself get too bogged down always having to get perfect grades, etc. Make sure your GPA is good enough to get you into grad school, but don’t let yourself get too overwhelmed (easy to say in hind-sight). I’ve found that it’s a lot easier to understand subjects like calculus and physics when they are applied to something you truly enjoy studying, like marine geology and geophysics in my case.

Sharon - I have the UW School of Oceanography to thank for introducing me to my career. Shortly after I arrived to start my junior year of undergraduate study, there was an announcement for a NOAA work-study position posted. The notice was for a “co-op” position, the format was to work full-time for 6 months, then study full-time for 6 months.  I applied for the position – and got it! My career with NOAA began with that opportunity. It was really valuable to combine work experience with my classes. The classes provided me with a basic understanding of the fundamental principles of Oceanography through the broad, interdisciplinary requirements. My work experience reinforced what I learned in class through practical applications – and yes, I have had to use the skills learned in class to, for example, derive the equation of state for seawater or calculate the settling speed of suspended particles, in my job.

My advice to students would be to say “YES!” to any opportunity to participate in field or lab experiences, even if it means delaying classes if you can. You will get a chance to find out if you really are interested in this type of work (or if getting seasick might be a deal-breaker). You might discover you are actually quite interested in a topic that you never thought about before, or thought you wouldn’t like. You will get a chance to demonstrate your work ethic and initiative – two characteristics that can be really important in standing out from other applicants for jobs you are interested in. Finally, going to graduate school is important for attaining most research positions, however, there are many support roles that are hugely important to the success of research projects that do not require a graduate degree (and many that are opportunities for students). Don’t underestimate the value of skills like being able to use various software (applications like GIS, spreadsheets, graphics and data visualization software, etc., and being able to code). Stay positive, open-minded and curious!

Susan - What is one of your fondest memories working with Sharon?

I have a lot of fond memories of working with Sharon Walker, and I’m sure we will make a whole lot more. We’ve developed a very close friendship over the past 20+ years. We’ve sailed together, worked together on projects on shore, and enjoyed many short vacations together in rather exotic places on either end of an international expedition. One fond, quirky, memory happened at Aggie Grey’s hotel in Apia Samoa. We came across a couple of men dressed in safari-type outfits, including the hats. Sort of out-of-place in the land of lava lavas (sarongs). So, we struck up a conversation with them, joined them for dinner, and discovered they were associated with a group called TIGHAR, and were on their way to Nikumaroro island in Kiribati to look for Emelia Earhart’s plane. They believe she and her navigator landed (crashed?) on the island and eventually died there. Sharon and I have met some interesting people in the strangest places. She would tell you that I will talk to anyone and get their life story during a taxi ride, and she’s probably right.

Sharon - What are some of your favorite things about working with Susan?

Susan is an absolute pleasure to work with and I am grateful to have shared so many great experiences and discoveries with her and the rest of our team. Susan’s work ethic and dedication, (especially before, during and after cruises!) assures that multibeam data is of the highest quality possible, the maps she produces are not just functional, but beautiful as well, and readily available for operational use. PLUS she processes new data and turns it into map form almost instantly during cruises (even if it means she doesn’t get much sleep). We would have never been as effective at exploring a new lava flow along the Mariana back-arc if Susan hadn’t been there to process all that data.  Susan has a great sense of humor, is super outgoing (spend 5 minutes with her and she will understand your life history!), and compassionate towards all creatures great and small. We’ve shared a few really nice “vacations” at some fantastic beach spots by arriving a day or two before the work crunch begins, or lingering a day or two after all the work is done. She is a really good friend, and I appreciate having such a good friend at work. 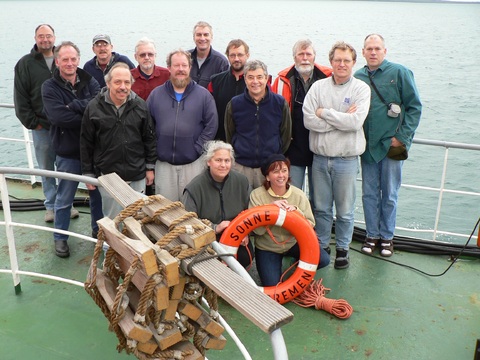