A model displaying the general functions of the AI that Dr. Manucharyan is working with NASA to develope. 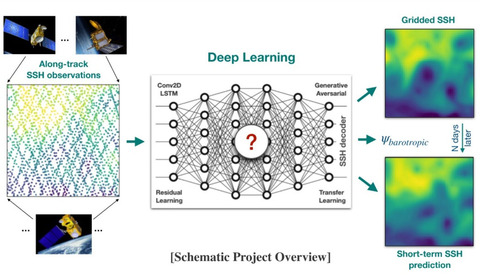 A model displaying the general functions of the AI that Dr. Manucharyan is working with NASA to develop 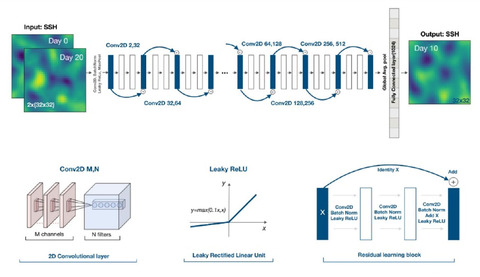 When the average person hears the term Artificial Intelligence (or AI) they likely think of something that resembles the character of HAL 9000 from Stanley Kubrick’s 2001: A Spacetime Odyssey – a precise, logical, unfeeling machine that still manages to possess the basics of a human personality. They might also be filled with a faint sense of dread at the thought of a not-so-distant future where such machines achieve dominion over humanity, and while the dystopian worlds of The Terminator and The Matrix might still be a little way off, it turns out that real-life AI is already accomplishing feats far beyond the capabilities of the human brain.

Georgy Manucharyan, an Assistant Professor in the School of Oceanography, is currently working on a NASA project to explore ocean dynamics using recent developments in AI. Dr. Manucharyan is interested in how this technology could advance his research on ocean turbulence, but when asked about how he became involved with such a project, he responded that he originally began learning about AI just because it seemed like a fascinating hobby. He was particularly impressed when he stumbled across a Science paper by Google’s DeepMind reporting the successful implementation of AI into the game of chess. “People tried to use chess to develop their AI ideas,” says Dr. Manucharyan. “We knew that human-made computerized algorithms can beat any human chess player, but they have developed an AI that beats the best of the human-made algorithms – a remarkable achievement!”

Scientists have worked tirelessly for decades to produce algorithms capable of predicting the best possible move for a given scenario in chess, but their success has been hampered by the fact that they are only human, and thus can only account for so many ideas before exhausting their mental resources. An algorithm is essentially just a series of rules and numbers that can be fed into a computer to calculate a result more quickly, so it is limited by the developmental abilities of its creators. Companies like Google’s DeepMind have evaded this problem by inventing AI that can make its own algorithms, unimpeded by the limitations of a physical form. In the case of the Science paper on the game of chess, these AI-designed algorithms completely stomped the human made ones, in a display that he described as comparable to seeing one of the greats like Serena Williams not be able to score a single point when playing a tennis match against a complete newcomer. From there, Dr. Manucharyan was hooked, and with the help of tutorials and example code circulated in online AI communities, he was able to learn enough about the technology to obtain a NASA grant for its application within the field of physical oceanography.

Dr. Manucharyan explained his enthusiasm for his new work by detailing how he thinks it could help solve one of the main problems facing modern oceanographic studies. He explained that “we actually don’t observe the ocean really well … the ocean is highly heterogeneous, meaning its parameters – heat, salt distribution, nutrients, everything – depend on space and time.” He went on to say that while field campaigns are extremely valuable, they only capture a brief snapshot of the ocean’s complex reality. Technological advancements made in recent decades have attempted to remedy this problem by developing autonomous platforms like fleets of robotic floats or satellites that are capable of observing constant changes in oceanographic data. But these sensors can only monitor very small regions of the ocean at a time, and it would be wildly expensive to expand them to an ideal degree of spatial and temporal coverage. “We’d like to figure out what happens at all times, everywhere,” says Dr. Manucharyan.

Where AI can become useful is in its ability to fill in those gaps between observations. Dr. Manucharyan believes that by feeding AI the currently available sparse data, we could develop highly nonlinear models of the ocean for use in various scientific endeavors, including data interpolation when there are large gaps in observations or estimation of unobserved quantities like turbulent heat fluxes. He likened the process to “reconstructing the murder scene,” where small clues are combined to create a vivid portrait of the past. He also thinks that understanding these previous events in detail could help us predict future ones, with advanced ocean weather forecasting being one of the most exciting possibilities provided by this new approach.

The future of AI in general is equally exciting, as scientists are essentially developing machines that can be used to accurately answer complex academic problems that we cannot solve ourselves. Manucharyan said to imagine it like sitting down with Albert Einstein to ask him questions about physics. “There’s no way you’re going to understand what is in his mind, but you can still trust his answers.” He even believes that AI could one day help design new ideas that are not limited to the academic sciences; that eventually these machines could help us better understand the nature of art or social interactions. The number of possibilities that this technology could open up to us is seemingly endless, and while we are not quite to the point of worshipping a ruling class of robot overlords, developing a solid public understanding of AI will be necessary in securing the prosperity and advancement of the human race in the coming decades.

A model displaying the general functions of the AI that Dr. Manucharyan is working with NASA to develope.

A model displaying the general functions of the AI that Dr. Manucharyan is working with NASA to develop

The ocean is a dynamic fluid