The BEAMS Programme focuses on strengthening technical and applied skills in the next generation of marine geospatial scientists and workforce. 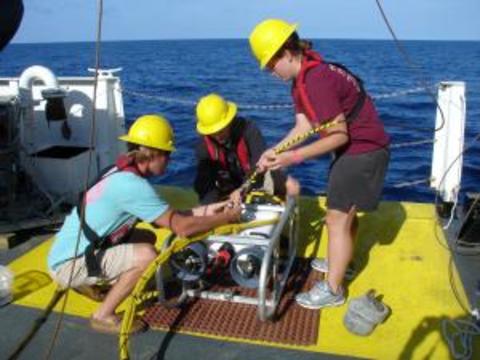 Developing qualified ocean surveyors for the marine geospatial workforce requires an educational opportunity that goes well beyond the limitation of classroom and laboratory exercises. The BEAMS Programme focuses on strengthening technical and applied skills in the next generation of marine geospatial scientists and workforce.  The program is lead by Dr. Leslie R. Sautter, College of Charleston; Dr. Miles Logsdon, University of Washington, and Mr. Paul Cooper, CARIS USA, USA.

The 2012 BEAMS teamThe rapid growth in new technologies for the ocean survey field has not been matched by the opportunities available for instruction in undergraduate coursework, nor has this growth been accompanied by a parallel growth of an informed and technology-literate workforce. The BEnthic Acoustic Mapping and Survey (BEAMS) ­Programme is designed to address the omnipresent need for qualified ocean surveyors to support the expanding academic opportunities and job ­market in bathymetric mapping, seafloor ­habitat ­characterisation, hydrography, and marine geophysics research.

The BEAMS Programme was initiated in 2007 at the College of Charleston (CofC) Dept. of Geology and Environmental Geosciences, teaming with the hydrographic survey software provider Caris. In 2011, the programme was expanded to include the University of Washington (UW) School of Oceanography.

BEAMS post-processingNearly all participating students have had the opportunity to take part in a dedicated BEAMS training cruise (1 to 4 days), during which they had hands-on experience with multibeam sonar data acquisition, survey operations and deploying numerous ocean-survey related instruments, such as a CTD, ROV, side-scan sonar, sub-bottom seismic profiler and sediment grab sampler. Both the 183’ NOAA Ship Nancy Foster and 280’ UNOLS R/V Thomas Thompson (operated by UW) have been used for BEAMS cruises. As the programme evolves, more opportunities are being generated for BEAMS Team students to gain experience with nearshore survey operations using small vessels. In addition to BEAMS cruises, more than 60 berths onboard multi-beam sonar cruises have been filled by BEAMS students who have volunteered as survey technicians.

To date, 103 students have completed the BEAMS Programme’s SeaMap foundation course at either CofC or UW, and over 90 of them have conducted research and presented their work at a symposium/poster session at their respective campus. Thirty-six (51%) of the 70 BEAMS students who have completed their undergraduate degree have continued to use their skills within private industry, government or graduate schools in the sea survey-related workforce. 44% of this workforce is women. Currently 13 alums have been hired full-time within marine geospatial private industry and 10 are in full-time NOAA jobs doing survey work. At least 18 BEAMS Team students (some who are still in college) have been hired for contractual part-time jobs, and more than 20 have had experience as interns. Twelve alums have gone on to graduate school, using their BEAMS skills as part of their research.

A BEAMS Programme Endorsement of competency and accomplishment is actively being developed. Members of the marine geospatial profession will aim to recognise the BEAMS Endorsement to signify a student’s strong potential for success in the marine geospatial workforce. Endorsement will be awarded when a student has fulfilled the requirements in four areas:
• Coursework: A core of required and elective academic coursework related to a comprehensive suite of critical software and other tools for use in ocean surveys.
• Fieldwork: Practical experience at sea (seafloor and water column surveys), during which students gain direct experience with technology and field operations.
• Research: Conducting research, applying skills to geological and biological studies. Students present their work at their academic institution, and are encouraged to present at a regional or national professional meeting.
• Internship: When possible, students complete an internship with a BEAMS industry partner. Internships range in duration, scope and pay.

Survey and data collection on-waterPlanned expansion of BEAMS will allow for inclusion of additional coursework, workshops and field experiences involving side-scan sonar, sub-bottom profiling, water column processes, and working with AUVs. Industry partnerships will be essential for the programme’s continued growth. In addition to BEAMS’ founding partner, CARIS, EIVA, QPS, Teledyne Odom, Kongsberg, and HighlandGeo have already made significant contributions, and many BEAMS alumni are offering their ocean survey talents and resources.

The BEAMS Programme has tremendous potential for generating many qualified ocean surveyors annually. Potential BEAMS Partners who are able to contribute resources are being sought to strengthen the training and experience of BEAMS graduates.

Biography of the author
E-mail: SautterL@cofc.edu

The BEAMS Programme focuses on strengthening technical and applied skills in the next generation of marine geospatial scientists and workforce.

The student chapter of the Marine Technology Society (MTS) exists to provide students with an opportunity to gain experience in the field of Ocean Technology.

This was the first official gathering of the collaborative SeaMap Program, and includes students and faculty from the College of Charleston and U

Seafloor Mapping: an Introduction to the acquisition, processing, and analysis of multibeam sonar data used in mapping seafloor