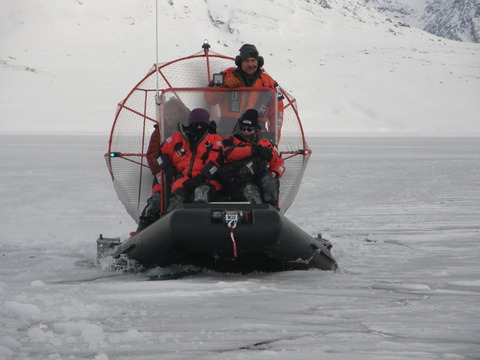 Here's a group photo of us working on sea ice in Kobbfjord, Greenland, on March 13, air temperature a balmy –10°C. Our NSF-OPP-supported project addresses how bacteria adapt to high salt concentrations inside the ice following freeze-up and how that process may link to primary production by ice algae later in the spring. Left to right is our Greenlandic guide Peter (from Nuuk), PI Jody Deming (UW), Master mobilizer Shelly Carpenter (UW), Co-PI Eric Collins (former UW grad student, now assistant professor at UAF), and grad students Lorrie Maccario (co-advised at the University of Lyon, France) and Evan Firth (UW). The five scientists are all wearing water-tight survival suits as we had to make our way to the site on foot, sometimes wading through the icy waters and thin ice along the coast. Peter arrived by snow machine, riding high across the coastal slope. Fortunately, our return to base at the Greenland Research Climate Center in Nuuk was facilitated by airboat (then small research boat), as shown in the second photo of Ivali Lennert, our Greenlandic driver, and passengers Eric, Jody and Lorrie.