Big ships and underwater robots: heading out to sea with the Ocean Observatories Initiative

During testing of the cabled high definition camera, which streams live imagery to shore every three hours, the camera lights up Jason at working at nearly... 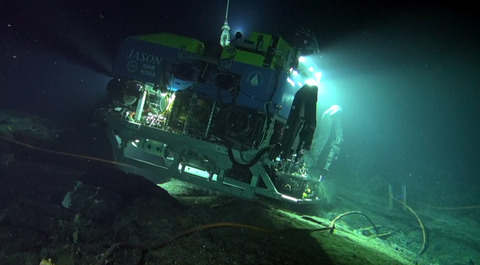 During testing of the cabled high definition camera, which streams live imagery to shore every three hours, the camera lights up Jason at working at nearly a mile beneath the oceans surface on this active volcano. Credit: UW/OOI-NSF. V20.

The low power junction box (LJ01D), which provides power, bandwidth, and communications to RCA instrumentation at the Oregon Shelf site, is now home to... 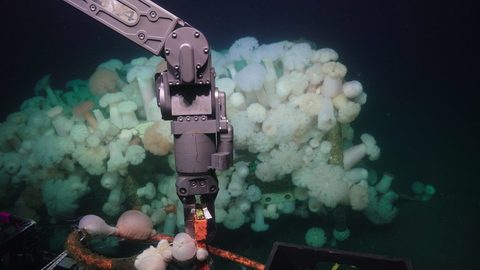 The low power junction box (LJ01D), which provides power, bandwidth, and communications to RCA instrumentation at the Oregon Shelf site, is now home to a vibrant community of sea anemones. Credit: UW/NSF-OOI/WHOI. V19.

Posted August 3rd, on the UW's College of the Environment web site here

It’s summertime, and that means scientists across the University of Washington College of the Environment are in the field collecting data. Researchers in the School of Oceanography are no different and are working off the Oregon coast on their annual expedition to maintain the long-running cabled ocean observatory. Part of the broader National Science Foundation’s Ocean Observatories Initiative (OOI), UW oversees the Regional Cabled Observatory that spans several sites in Pacific Northwest waters, ranging from shallow coastal locales to deeper waters in the open ocean more than 300 miles offshore. Each site hosts internet-connected scientific instruments that measure physical, chemical, geological and biological properties of the marine environment, providing a 24/7, real-time presence in the ocean. The broad goal is to help scientists answer questions about how our planet works, especially in relation to climate and ecosystem changes, and tectonic and volcanic activity in the sea.

For nearly all of August, 13 scientists and engineers from UW will be at sea collecting data and maintaining infrastructure aboard the UW’s R/V Thomas G Thompson. We caught up with Deb Kelley, director of the Regional Cabled Array at the UW, to see what’s in store.

Q: Tell me about the cruise. What do you have planned?

A: It’s about a month-long intense cruise, pretty similar to past expeditions. We’ll handle over 200 instruments while at sea — using the remotely operated vehicle (ROV) Jason, the team will recover about a hundred instruments from the seafloor and from state-of-the-art moorings, and put a hundred other instruments back in.

On our cruise, working around the clock, we might have three or four dives a day: the deepest site is 9,500 feet beneath the oceans’ surface. The shallowest site is only an hour off shore, which is at a depth of about 650 feet. We’re going to be going back out to Axial Seamount, the most active underwater volcano off our coast, having erupted in 1998, 2011 and 2015 — and it is poised to erupt again. We will also be working at methane seeps sites again where methane ice is exposed on the surface of the seafloor and where explosions of methane-rich bubbles issue from the seafloor. With the ship operating 24/7 the scientists and engineers onboard work full out during this month-long expedition.

Q: What most excites you most about heading to sea?

A: I am always excited to see how much the sites change, with dramatic changes in the seafloor topography and associated biology. Coming from the geology world, most evolution is long-term, but at these sites it’s daily. And the fact that you can go to active volcanoes like Axial Seamount and the underwater hot springs that it hosts, or Southern Hydrate Ridge and the seafloor doesn’t look anything like what it did the year before is always amazing to me.

At the coastal sites, the geology doesn’t change as dramatically, but the animal populations can change significantly. There’s one site at about 2,000 feet water depth. Last year, there were just swarms of sablefish darting in and out in front of the ROV. In 2015, 3 months after Axial erupted, when we visited for the first time the still hot lava flow was more than 400 feet thick — truly remarkable! Another one of our platforms at about 260 feet water depth close to shore was completely covered in animals. You can’t even tell that it’s a platform — it looks like an island of sea anemones that are really beautiful.

At Southern Hydrate Ridge, every year it’s a place where there are explosions or methane bubbles issuing from the seafloor that rise over 1000 feet into the water column, supporting bacteria that use the methane as an energy source. So the ocean’s phenomenally dynamic, both at the surface and deeper, so it’s always good to see what’s going on out there. Every year it changes remarkably, and we’re always surprised how much.

Q: How has COVID-19 made this cruise different?

A: For me, the biggest impact and the one that I most regret is that we’ll only have two students on board. We usually have 15-25 students each year on board. And another big change is that we’re 10 people down for the cruise than normal. That’s a lot of “hands” missing for us. Preparing for the cruise has certainly taken more of many people’s time. Imagine you’re at sea for 30 days, but then you add a strict two-week quarantine before you go. That means no going out, no walking the dog, no going to the grocery store. So people had to get everything done early because there’s a ton of stuff to get ready: over 80,000 pounds of gear was sent to the ship for our mobilization. We have over 30 different types of instruments, the infrastructure’s complicated, a lot of moving parts. That’s a big ask for people, and I think one of the really remarkable testaments to our team is everybody said they were willing to do that.

Q: Are you going as chief scientist, like you have in the past?

A: This’ll be the first time in 30 years that I haven’t been to sea — I am having my knee replaced. So when I found out I couldn’t go as chief scientist, we thought about who could step in and sail as chief scientist, we reached out to Brendan Phillip. He was an undergraduate as part of our VISIONS at-sea experiential learning program and then a graduate student here in Oceanography. He sailed with us for 4 years and then he worked as part of the Regional Cabled Array team, now he’s at George Washington University. I don’t know of many people at his career stage that will help lead a 30 day major expedition that’s very complicated. So, I think that’s a great testament to the UW and our dedication to mentorship, and this will be a good trial, a good learning experience. We have 100 percent faith in him.

Q: How can people stay up to speed while you are at sea?

A: We are now streaming live again on our Interactive Oceans website, both on deck and as soon as Jason goes in the water. We  have Twitter, Instagram, and then will post semi-daily updates on the blog. We are excited about the community being able to look live over our shoulders as we work on this NSF-funded underwater facility that brings the internet directly into the oceans.

During testing of the cabled high definition camera, which streams live imagery to shore every three hours, the camera lights up Jason at working at nearly...

During testing of the cabled high definition camera, which streams live imagery to shore every three hours, the camera lights up Jason at working at nearly a mile beneath the oceans surface on this active volcano. Credit: UW/OOI-NSF. V20.

The low power junction box (LJ01D), which provides power, bandwidth, and communications to RCA instrumentation at the Oregon Shelf site, is now home to...

The low power junction box (LJ01D), which provides power, bandwidth, and communications to RCA instrumentation at the Oregon Shelf site, is now home to a vibrant community of sea anemones. Credit: UW/NSF-OOI/WHOI. V19.

THE R/V THOMAS G. Thompson has just returned to its home port at the University of Washington School of Oceanography in Portage Bay after a weeklong research...