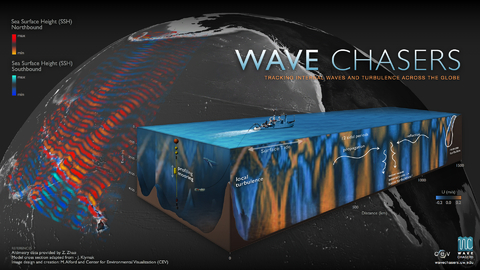 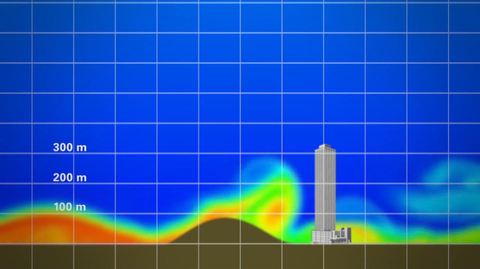 The deep-sea waves are 800 feet tall, as high as a skyscraper

Waves breaking over sandy beaches are captured in countless tourist photos. But enormous waves breaking deep in the ocean are seldom seen, although they play a crucial role in long-term climate cycles.

A University of Washington study for the first time recorded such a wave breaking in a key bottleneck for circulation in the world's largest ocean. The study was published online this month in the journal Geophysical Research Letters.

The deep ocean is thought of as dark, cold and still. While this is mostly true, huge waves form between layers of water of different density. These skyscraper-tall waves transport heat, energy, carbon and nutrients around the globe. Where and how they break is important for the planet's climate.

"Climate models are really sensitive not only to how much turbulence there is in the deep ocean, but to where it is," said lead author Matthew Alford, an oceanographer in the UW Applied Physics Laboratory. He led the expedition to the Samoan Passage, a narrow channel in the South Pacific Ocean that funnels water flowing from Antarctica.

"The primary importance of understanding deep-ocean turbulence is to get the climate models right on long timescales," Alford said.

Dense water in Antarctica sinks to the deep Pacific, where it eventually surges through a 25-mile gap in the submarine landscape northeast of Samoa.

"Basically the entire South Pacific flow is blocked by this huge submarine ridge," Alford said. "The amount of water that's trying to get northward through this gap is just tremendous – 6 million cubic meters of water per second, or about 35 Amazon Rivers."

In the 1990s a major expedition measured these currents through the Samoan Passage. The scientists inferred that a lot of mixing must also happen there, but couldn't measure it.

In the summer of 2012 the UW team embarked on a seven-week cruise to track the 800-foot-high waves that form atop the flow, 3 miles below the ocean's surface. Their measurements show these giant waves do break, producing mixing 1,000 to 10,000 times that of the surrounding slow-moving water.

"Oceanographers used to talk about the so-called 'dark mixing' problem, where they knew that there should be a certain amount of turbulence in the deep ocean, and yet every time they made a measurement they observed a tenth of that," Alford said. "We found there's loads and loads of turbulence in the Samoan Passage, and detailed measurements show it's due to breaking waves."

It turns out layers of water flowing over two consecutive ridges form a lee wave, like those in air that passes over mountains. These waves become unstable and turbulent, and break. Thus the deepest water, the densest in the world, mixes with upper layers and disappears.

This mixing helps explain why dense, cold water doesn't permanently pool at the bottom of the ocean and instead rises as part of a global conveyor-belt circulation pattern.

The Samoan Passage is important because it mixes so much water, but similar processes happen in other places, Alford said. Better knowledge of deep-ocean mixing could help simulate global currents and place instruments to track any changes.

On a lighter note: Could an intrepid surfer ride these killer deep-sea waves?

"It would be really boring," admitted Alford, who is a surfer. "The waves can take an hour to break, and I think most surfers are not going to wait that long for one wave."

In fact, even making the measurements was painstaking work. Instruments took 1.5 hours to lower to the seafloor, and the ship traveled at only a half knot, slower than a person walking, during the 30-hour casts. New technology let the scientists measure turbulence directly and make measurements from instruments lowered more than 3 miles off the side of the ship.

The researchers left instruments recording long-term measurements. The team will do another 40-day cruise in January to collect those instruments and map currents flowing through various gaps in the intricate channel.

For more information, contact Alford at 206-221-3257 or malford@apl.washington.edu. Note: Alford will be traveling Sept. 13-20 and best reached via e-mail.

The deep-sea waves are 800 feet tall, as high as a skyscraper

Children of SVSG were aboard the Thomas G. Thompson this week participating in a science experiment with UW Oceanographers.

Ever seen waves breaking on a beach? If you've surfed or watched big waves being surfed, maybe you've even thought how big

"We are at sea on the bathymetry mapping cruise for the Samoan Passage project. The bathymetry is complicated, but so far it looks like our origi