Bubbles of methane rising from seafloor in Puget Sound

This map of Puget Sound shows the location of the methane plumes (yellow and white circles) detected along the ship’s path (purple). Black lines show the...

The release of methane, a powerful greenhouse gas responsible for almost a quarter of global warming, is being studied around the world, from Arctic wetlands to livestock feedlots. A University of Washington team has discovered a source much closer to home: 349 plumes of methane gas bubbling up from the seafloor in Puget Sound, which holds more water than any other U.S. estuary.

The columns of bubbles are especially pronounced off Alki Point in West Seattle and near the ferry terminal in Kingston, Washington, according to a study in the January issue of Geochemistry, Geophysics, Geosystems.

“There’s methane plumes all over Puget Sound,” said lead author Paul Johnson, a UW professor of oceanography. “Single plumes are all over the place, but the big clusters of plumes are at Kingston and at Alki Point.”

Previous UW research had found methane bubbling up from the outer coasts of Washington and Oregon. The bubbles in Puget Sound were first discovered by surprise in 2011, when the UW’s global research vessel, the RV Thomas G. Thompson, had kept its sonar beams turned on as it returned to its home port on the UW campus. The underwater images created by the soundwaves showed a distinct, persistent bubble plumes as the vessel rounded the Kingston ferry terminal.

Since then, the team analyzed sonar data collected during 18 cruises on the UW’s smaller research vessel, the RV Rachel Carson. Methane plumes were seen from Hood Canal to offshore of Everett to south of the Tacoma Narrows. At Alki, the bubbles rise 200 meters, about the height of the Space Needle, to reach the ocean’s surface.

“Off Alki, every 3 feet or so there’s a crisp, sharp hole in the seafloor that’s 3-5 inches in diameter,” Johnson said. “There are holes all over the place, but there aren’t bubbles or fluid coming out of all of them. There’s occasionally a burst of bubbles, and then another one 50 feet away that has a new burst of bubbles.”

This research video shows bubbles emerging from the seafloor about 200 meters (650 feet) deep. It was recorded Oct. 25, 2020, about 1 mile offshore from Seattle’s Alki Point. Credit: Paul Johnson/University of Washington

The study is an early step toward exploring the release of methane from estuaries, or places where saltwater and freshwater meet, a subject more widely studied in Europe. Though only a small amount of natural methane is released compared to human sources, understanding how the greenhouse gas cycles through ecosystems becomes increasingly important with climate change.

“In order to understand methane in the atmosphere and control the human sources, we have to know the natural sources,” Johnson said.

The two persistent fields of bubble plumes occur above geologic faults: for the Alki bubbles, located above a branch of the Seattle Fault, and for the Kingston bubbles, above the South Whidbey Fault. It’s likely that the bubbles are connected to the underlying geology, Johnson said. 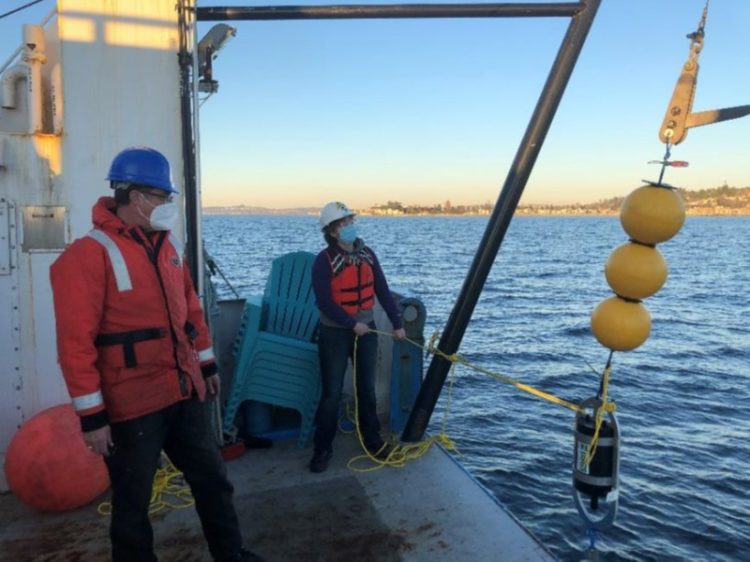 Questions remain about the bubbles’ origins. One initial hypothesis, that the bubbles might be coming from the Cascadia Subduction Zone, was not supported by preliminary data. The gas bubbles don’t show the same distinctive chemistry as nearby hot springs and deep wells that connect to this geologic feature deep underground.

Humans also don’t seem responsible. Puget Sound has in the past been a dumping ground for waste or sediment, but vigorous tides sweep that material out into the open ocean, Johnson said. Sewer outflows, gas lines and freshwater storm drains also don’t match the plumes’ locations.

Instead, a biological source of methane beneath the seafloor seems likely, Johnson said. The source may be in the dense clay sediment deposited after the last Ice Age, when glaciers first carved out the Puget Sound basin. The methane seems to be biological in origin, and the bubbles also support methane-eating bacterial mats in the surrounding water.

Jerry (Junzhe) Liu, a senior in oceanography, helped to analyze the data and participated in a 2019 cruise that contributed data.

“I’m interested in two seemingly parallel fields: fault zones and air-sea interactions for climate,” Liu said. “This project covers all the way from below the seafloor to above the ocean’s surface.”

In follow-up work, scientists used underwater microphones this fall to eavesdrop on the bubbles. Shima Abadi, an associate professor at the University of Washington Bothell, is analyzing the sound that bubbles make when they are emitted. The team also hopes to go back to Alki Point with a remotely operated vehicle that could place instruments inside a vent hole to fully analyze the emerging fluid and gas.

Co-authors of the paper are Tor Bjorklund, an engineer in UW oceanography; Chenyu (Fiona) Wang, a former UW undergraduate; Susan Hautala, a UW associate professor of oceanography; Nicholas D. Ward, a UW affiliate assistant professor of oceanography and researcher at the Pacific Northwest National Laboratory; Susan Merle and Sharon Walker at the National Oceanic and Atmospheric Administration; and Tamara Baumberger at Oregon State University. The research was funded by the National Science Foundation.

This map of Puget Sound shows the location of the methane plumes (yellow and white circles) detected along the ship’s path (purple). Black lines show the... 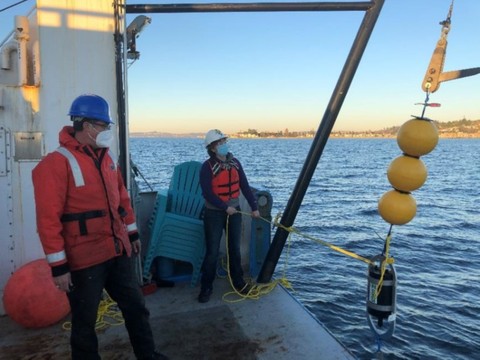