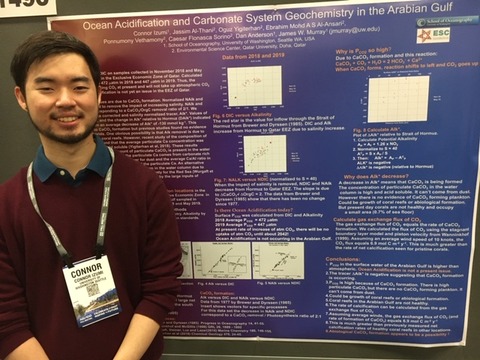 On Monday, the 9th of December 2019, Connor Izumi will be presenting his senior thesis research at AGU: OS11C-1490 - Ocean Acidification and Carbonate System Geochemistry in the Arabian Gulf

Abstract:
We measured Alk and DIC on samples collected in November 2018 and May 2019 at seven stations in the Exclusive Economic Zone of Qatar. Calculated surface PCO2 averaged 472 μatm in 2018 and 447 μatm in 2019. Thus, the Arabian Gulf is degassing CO2 at present and will not take up atmospheric CO2 until 2042. Ocean acidification is not yet an issue in the EEZ of Qatar.  The elevated PCO2 values are due to CaCO3 formation. Normalized NAlk and NDIC were calculated to remove the impact of increasing salinity. NAlk and NDIC decrease corresponding to a CaCO3/OrgC removal ratio of 2/1. We calculated the nitrate corrected and salinity normalized tracer, Alk*. Values of Alk* were negative, and the change in Alk* relative to Hormuz (DAlk*) indicated that there has been an average decrease of Alk* of -130 mmol kg-1. This decrease is due to CaCO3 formation but previous studies found no evidence
for coccolithophorids. One obvious possibility is that Alk removal is due to CaCO3 formation in coral reefs. However, recent study of the composition of particulate matter found that the average particulate Ca concentration was 3.6%, and was easily acid soluble (Yigiterhan et al, 2018). These results suggest that a significant amount of particulate CaCO3 is present in the water column. One hypothesis is that the particulate Ca comes from carbonate rich atmospheric dust. Using Al as a tracer for dust and the average Ca/Al ratio in Qatari dust can only explain about 3% of the particulate Ca. An alternative hypothesis is that particulate CaCO3 may form in the water column due to abiological CaCO3 formation, as proposed recently for the Red Sea (Wurgaft et al, 2016). Precipitation of CaCO3 may be induced by the large inputs of nucleation sites in the form of atmospheric dust.