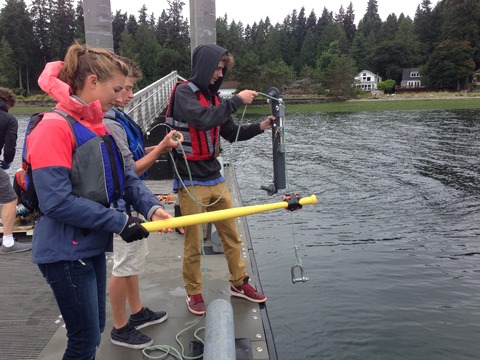 Ocean acidification is top of mind for many Pacific Northwest scientists, shellfish farmers and even seafood chefs, but a new initiative seeks to know how an unsuspecting audience — kids and teenagers in the Northwest’s urban and rural areas — is impacted by this issue.

EarthEcho International, Philippe Cousteau, Jr.’s environmental education and youth leadership nonprofit, has launched an expedition — called “Acid Apocalypse” — around Washington state to explore the growing threat of ocean acidification and meet with students and scientists to learn how the issue affects their lives. The organization, founded by the grandchildren of legendary explorer Jacques Cousteau, is hosting Google Hangouts while in the field and will produce documentary-style videos, lesson plans and other resources about ocean acidification for teachers and students.

Washington Sea Grant’s ocean acidification expert, Meg Chadsey, worked with the East Coast-based nonprofit to identify local high schools and youth programs that focus on this issue in the classroom or through field experiences.

“EarthEcho wanted to focus on youth who are engaged in ocean acidification, are affected by it in some way and want to do something about it,” Chadsey said. “Some of them are students I’ve helped train to monitor the changing chemistry of Puget Sound.”

The Cousteau team spent Monday and Tuesday on the Olympic Peninsula with members of the Makah and Suquamish tribes, learning about a citizen science water-quality monitoring program, and catching and preparing salmon using traditional methods. On Wednesday they will visit Bainbridge Island’s Eagle Harbor High School, where students are working with Washington Sea Grant and the Puget Sound Restoration Fund to come up with their own questions about ocean acidification and design a monitoring program to address them.

The team will wrap up in Seattle on Thursday, first at the National Oceanic and Atmospheric Administration’s Pacific Marine Environmental Lab to talk with a team of Seattle high school and college students who deployed autonomous sensors to measure pH and other aspects of seawater chemistry in Puget Sound. Then they will head to Gas Works Park to interview leaders of the local youth climate change organization Plant for the Planet.

The multimedia produced on this Washington expedition as well as the ocean acidification curriculum for educators will be available starting in February.

Reporters are welcome to attend the Gas Works Park filming at 3 p.m. Thursday, Nov. 19. Cousteau and students will be available for interviews. Meet by the park pavilion shelter.

This year, jellyfish are on track to break all known records. In June, one sampling found them 24 times more abundant than usual.