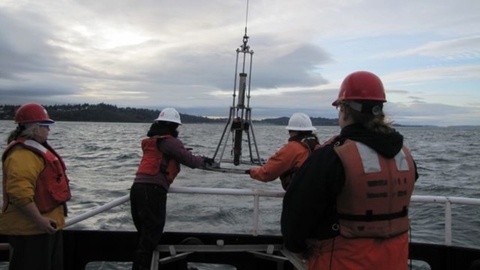 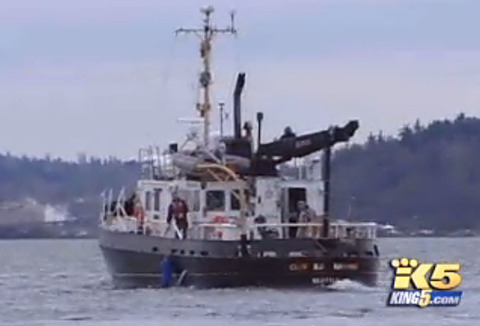 The R/V Barnes launches equipment that reaches Puget Sound and its various inlets and bays.

Every year toxic algae blooms along the Northwest coast - infecting shellfish and shutting down shellfish beds for harvest.

If people eat these poisoned shellfish they can become sick or die from what’s called Paralytic Shellfish Poisoning.

The algae occur naturally but for decades the shellfish industry and public health officials have been struggling to predict where the blooms will happen.

Stephanie Moore, an expert on harmful algal blooms with the Northwest Fisheries Science Center, is on a mission to find out where these algae sleep. She’s standing on the deck of the Clifford Barnes – a 65-foot research vessel heading out of Ballard Harbor in Seattle.

We reach the first sampling station and the team lowers a device over the side to collect muck from the bottom of the Sound - muck that could be full of sleeping algae – or cysts. By understanding where the next generation of algae is lying dormant, Moore and her team hope to help the shellfish industry and public health officials predict where the next toxic blooms could occur.

“So right now we’re lowering our corer down to get a sediment sample,” Moore explains as the long tube-shaped device disappears beneath the water. “These guys have this dormant resting cyst stage over winter and there are cues that tell them to germinate and swim to the surface and start growing.”

The algae Moore is talking about is called Alexandrium. It’s a sort of super bug – half plant, half animal. This single-celled organism has a whip-like tale that propels it through the water.

Oh, and it can photosynthesize – so once it swims from the depths up to the sunlight in the warmer weather it starts to divide… and divide… and divide – until it’s formed what’s called a bloom. That’s what makes shellfish, and potentially people, sick.

The R/V Barnes launches equipment that reaches Puget Sound and its various inlets and bays.