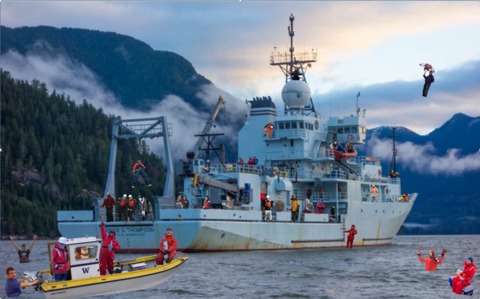 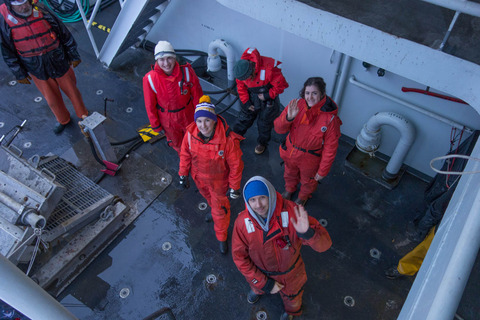 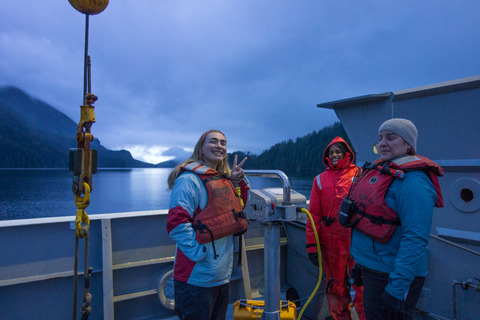 Big item of the day: I finally got to go out on the small boat. It was awesome. It was rainy and choppy, but we small boaters are a tough people. Anyway, we were only out for an hour and a half because Campbell just needed to pick up his buoys. I think he was concocting a plan to steal the Weelander and live in one of these inlets, but I guess something went wrong. Yours truly was the Official Log Spotter Extraordinaire. I spotted two logs and saved everyone’s life (OK, one of them was just a wave, but I played it off real smooth-like, so we’re good). I’m basically a hero, and I am fully expecting quite a bit of pomp and circumstance upon my arrival in Seattle.

The waves have just started picking up as I write this. I asked Steven, the Marine Tech, for Dramamine, and he said “Good Luck.” Thaaaaaat doesn’t make me super confident.

#Sean is still taking photos of everyone. His collages of our classmates went to a whole new level when he discovered he could photo-shop people in and out of photos. Dylan was the first victim, but Robert fell prey soon after.

Charlie has gone absolutely mad, MAD I TELL YOU, about this UCTD. I think if he could have gotten away with it, our cruise would have been extended just so we could fit in more UCTD casts.

Update: I pretty much died of seasickness and was apparently the only one. The high seas looked into my soul and deemed me unworthy.

So, since it’s the last day, and we’re headed back to Seattle, I’ve decided to format this post in a kinda sappy way. I would like to share, with you lovely readers, all of the things I’ve learned about the people I’ve gotten to know on this cruise. Here they are, in no particular order…

Julie Ann: She’s insanely hard-working. Take whatever you just thought of in your head as hard-working and multiply that by, like, 500, and you’re not even close. She also played lots of sports: cross country, basketball, and track. Basketball was her favorite. She wanted to be a guard, but she was the tallest so she was a forward.

Charles: He can only BARELY tell the difference between sand and mud. He also is extremely talented at making “sitting at a computer screen” look like “actual work.” But for some reason he only slept like two hours a day the whole trip. Once he found out my name is the feminine form of his name, he let me in on his plan for world domination. So, keep an eye out for that.

Una: I already knew that Una was a naturally sweet person, but I did not know that she also has a dark side. She also has some ROCKIN’ sea legs and did not know it before I told her.
Talia: There are things that are obvious about Talia. She does cross fit, she’s very strong, etc. But, oh my goodness, I had no idea that she was so amazingly nice as well. Talia is a natural leader and really cares about her research. I have a lot of respect for her. But I do fear for her sanity. The sediment fairy thing got a little too real.

Trevor: The award of Most Animated Person definitely goes to Trevor. Like, wow. I had no idea that many expressions were even physically possible on a human face. Also, his leg muscles are super weird.

Robert: He sort of fell in love with the UCTD on the trip. We were all really supportive of the relationship, but some of the public displays affection (PDA) were uncomfortable.

Danielle: Danielle was sort of like a little fairy, flitting in and out of the picture while we were at sea. She was out on the small boat, but then she would continue to work around the lab with her samples, which I think is insane. I honestly have no idea how she has so much energy.

Sean: Seriously, before this cruise, I had no concept of how many great photos Sean was capable of taking. He’s a goofy dude, though, and the kid’s an artist. But he also ate a bag of our poker M&M’s that clearly said “Do not eat, please.” Because they were poker M&M’s, guys. Like, ten different people and a dirty table touched those.

Campbell: Campbell was Mr. Small Boat, as I have mentioned. He’s also the one who taught me how to man the UCTD, which he took very seriously. My threats to throw the UCTD probe in the water did not go over suuuuper well.

Dylan: Hey may have missed his calling in the rope modeling industry. This is best explained by the attached picture.

Claire: Claire was giving Julie Ann a run for her money in the working hard industry. Between the small boat and constant sample analyses, I don’t think I actually ever saw her taking a break. She also owns the world’s greatest beanie, and if she didn’t so closely guard it with her life, I would have taken it.

Kenny: I want you to take this next line very seriously. KENNY IS A WIZARD OF PING PONG. The guy has powers; I guarantee it. Also, no one on this ship had a greater struggle than Kenny did with their hard hats.

Julia: Julahar, as she is known by some, is absolutely the most photogenic person on the planet. I dare every one of you to attempt to take a bad picture of her. It’s physically impossible. Also, she is a great one-man audience. She will laugh, and laugh genuinely hard, at almost anything.

Rebekka: Rocksbekka (may or may not be spelled right) was somehow always around. It’s possible that this is only because she and I were on the same watch, but I think it’s just as possible there were actually five clones of her on the ship. She was literally everywhere. She’s also scary hilarious and has some amazingly funny stories.

Ian: The most exciting thing for Ian was probably the day he found out exactly what the maximum length of beard he is comfortable with is. He was always reading. I think he read, like, five books on the entire trip and still found time for work and eating. I’m also still bitter that he ate some of my poker M&M’s while we were playing.

Matthew: I think that Matthew’s kryptonite is seriousness. This guy is constantly joking and messing around. His secondary kryptonite is probably saying words the right way. My personal favorite was the change from Esperanaza Inlet to Extravaganza Inlet.

Ben: Ben was always either in giant green rain pants or looking in microscopes. Personally, I suspect that nothing was under those microscopes, and the whole thing was just one long photoshoot of Ben doing science. But I also have no evidence of that. He also doesn’t take M&M poker seriously enough, which I think is a serious moral problem.

Brendan: Brendan was on my watch, and he was my first watch leader. He taught me how to beat box, and he taught Una how to dance. So maaaaybe he’s aiiight.

Jemima: She, along with Catherine, never lost their drive to work with the UCTD. I think that Jemima was the smartest person on the entire ship, though, because she was the one who figured to use the Mustang suit while out UCTD-ing in the rain. GENIUS. Also, she is great at all card games and ping pong. But she was good at pretending that I was real competition. And I was less good at pretending that I’m not a sore loser.

Colton: You may think that the only thing there is to know about Colton is that he is super tall, but, surprisingly, tall people also have other talents. Colton is the most graceful sediment sub-sampler. His spatula action on the box cores was that of a prodigy. Don’t be humble, Colton, you have a true GIFT for this.

Bryan: Bryan’s sampling in the open ocean on the first day of the voyage was a great highlight to get us started. But I think all the applause goes to the headband he wore that day. He went out on the small boat the same day I did, and he saved all of the seals of the ocean from a rope we found. That’s awesome because now ALL OF THE SEALS OWE HIM A FAVOR.

Rebecca: Rebecca was my roommate on the voyage, and she was awesome. She taught me about the Festivus tradition from Seinfeld, which I found interesting. Also, she’s tall but doesn’t want to be, so I’m going to find a way to steal a few inches from her.

Catherine: Oh, Catherine. Catherine, Catherine, Catherine. This girl has a disco ball lining in her jacket. That should be about all it takes to describe Catherine, but I’m going to keep going. This is the girl who, once she knew that there could be a visual confirmation for a UCTD depth check, figured the best way to signal was with DAHNCE. I said that in her “weird accent.” Her words, not mine. I think you guys have got the idea.

The 10 Days of Cruising carol said it all. We were the class that became a family.

Favorite quote: “The first Canadian soil I touched was 300 meters under the water’s surface.” –Talia Neiman 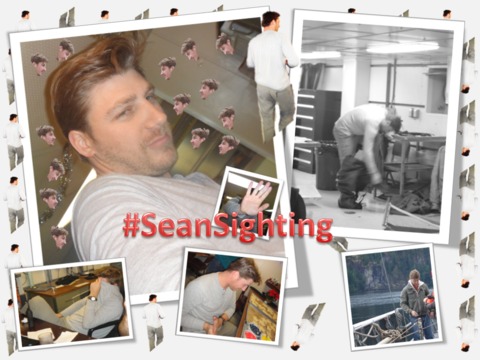