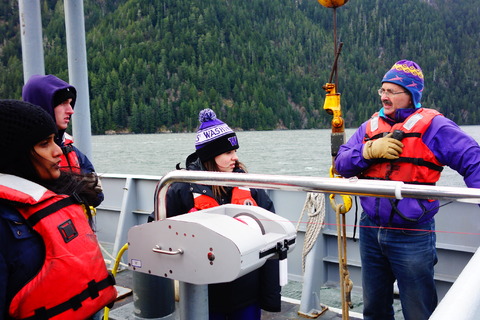 Catherine and Jemima are all over this UCTD thing 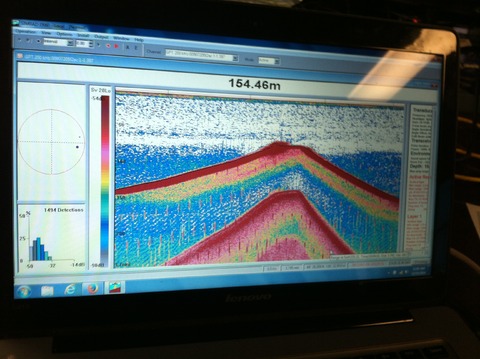 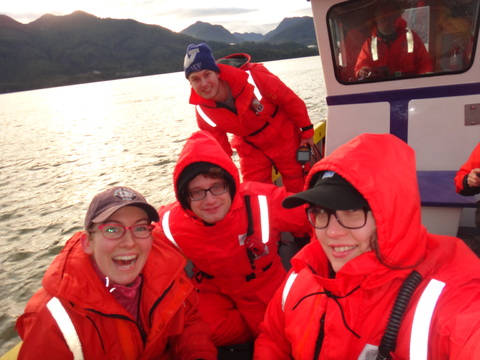 So, today got pretty behind. We weren’t going to launch the Weelander today, but then we were. But now we’re not. The wind is pretty insane apparently and we care about the safety of the small boat crew, so we aren’t launching the Weelander.

We’re headed to Tlupana soon — the redheaded stepchild of inlets. Literally no one cares about this inlet. Except the surveyors.

After a few glorious days of beautiful sunshine in Muchalat, the universe is reminding us how boring Tlupana is by giving us dreary and cold weather. We have tempted the fates, friends, and they have answered.

Really, there isn’t enough talk on this ship about how boring Tlupana is. Must remember to bring that up at least four times at lunch.

Just real quick though. The real question is: WHY AREN’T WE IN TAHSIS?

Breakfast was great as usual. The cook crew are morning people. That in itself is an anomaly that someone should focus on for their senior thesis.

In fact, the crew in general is pretty great and helpful.

Life on the ship is getting more routine for everyone. There are usually one or two things every day that trip us up, but all in all, we are starting to get good at working around the surprises.

Julie Ann finally went to sleep last night. We had to physically pin her down, but eventually she decided to take a break and let other people do some work. She and Claire are probably, objectively, the hardest working scientists on this ship, besides Charlie and the professors. (And a special shout-out to the box and kasten crew—Colton, Trevor, and Julia—who stayed up for >12 straight hours, give or take, to core and sub-sample.)

Oh, no. This blog post was starting to get a little serious, guys. UM... The physical and biological oceanographers are losing their collective minds about some of the work we will be doing today. It’s basically headed to be a UCTD/bioacoustics ALL-DAY-EVERY-DAY kind of day. To us mud people, this is very confusing.

Catherine and Jemima are all over this UCTD thing. Unfortunately, they keep being very British, so it’s hard to tell what’s so exciting. Someone gave them a radio for communication with the bridge, but Robert’s supervision has kept them from singlehandedly crashing the ship.

Ian and Sean are the bioacoustics wizards.

Talia and I have been working on our secondary thesis. We have discovered the presence of sediment fairies; species name Meganthiferians scintilaris (i.e. the common sediment fairy). Some people are skeptics. Some people laugh. Oh, how they laugh. … We are currently halfway through the results section. AND WHAT RESULTS THERE ARE, LADIES AND GENTLEMEN. Everyone keeps saying it’s weird how we have no direct photos of the fairies. They always seem to be kind of blurry or completely hidden in our hands or look like flashlights, but I think that people will just be blinded to the truth when they really want to be.

#SeanSighting is taking hold of the ship. Sean’s life narration has become a regular pastime. He continues to pop out of the ground and thin air to take photos. To be fair, he is taking some great pictures of the voyage, and his photos will most likely be the best representation to the outside world of what life was like on this ship.

Una just showed me the absolutely GLORIOUS pictures she’s been taking from the small boat. I mean, someone give this girl a scholarship. Also, it’s making me think that the small boat crew are lying liars. They look happy in these pictures (that’s what smiling means, right guys?) YET. Everyone on the small boat (except Campbell, who intends to steal the small boat and live on it) acts like they don’t like it. LIES. I’ve seen the proof.

We have been playing a lot of cards when we don’t have to work. So far, I’ve taught Jemima, Catherine, Kenny, and Talia to play Crazy Eights. Robert taught pretty much the whole ship to play Cribbage. But today we started playing poker. With M&M’s for money. Because the life at sea is nothing but an excuse to gamble without actually gambling. SOME OF US don’t take the candy poker seriously enough and just throw away their M&M’s as if they weren’t real money (I’m looking at you, BEN). But that defeats the point of the game. Also IAN. IS. AN. M&M THIEF. Thus far, Talia’s poker face is a work in progress. Update: Talia just destroyed me in five hands of poker.

Soon enough we will be in Tahsis, collecting mud.

Caroline (aka C-Dawg, aka WATCH LEADER #1)

P.S. I have been informed by people who have read this post that we are not, in fact, in Tlupana. In response I say, MY POINT STILL STANDS.

Catherine and Jemima are all over this UCTD thing