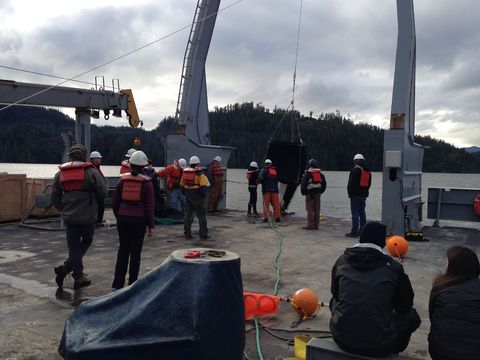 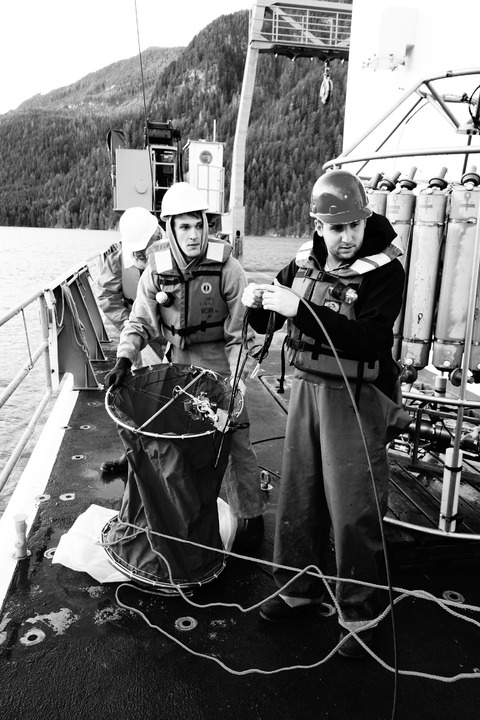 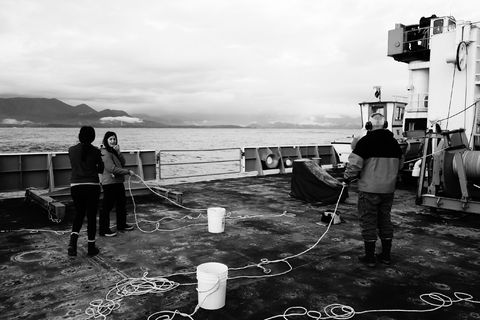 The morning sun rose up and over the heralding cliffs that surround the pristine waters of Nootka Sound. It was a clear morning, and conditions were calm. The storm had continued farther inland, and only a few straggling clouds remained. The region was more picture-perfect than most imagined. Steep hills encompassed us at every turn. Beautiful evergreen trees lay tall upon their faces. Seagulls flew overhead to say a swift hello before returning to their daily activities. If one was lucky enough, they would catch a sighting of the glorious Bald Eagle. “Even in Canada, America still rules!” as Ben P. would say. I believe most would agree.

The small boat team packed their lunches, donned their safety suits, and were off and away for the day. Back on the large boat, Rebekka G. was attempting to deploy her sediment trap, but it looks as though the sediment fairies are selfish, and like to keep the sediments to themselves. The details are hard to understand without actually having been there. In laymen’s terms, lines were tied off incorrectly, and weight distributed unevenly; deployment attempt #1 had failed. A couple of hours later, Rebekka had the opportunity to try again and everything went as planned, deployment successful! Afterwards, we headed to the next station, M14, with plans for a CTD, vertical net tow, secchi disk, and 200 khz sounding.

First up at station M14 was the CTD, deployed successfully. Kenny got water samples from around 6 niskin bottles. Ian and Sean then began to start setting up their bioacoustics sounder while Ben P. prepared to deploy his vertical net. You could feel the excitement in the air, but also the chaos! Ben was running around so fast and making some strange sounds; the crew on watch could do nothing but, well, watch!  Then comes the news that brought down the mood so low, not even Trevor’s encapsulating smile could bring back up. The Weelander was coming back since dusk was near and she had to be put back on the main deck. All science operations were canceled until further notice. Ian was the most disappointed, as he was woken up from a nap, for nothing! Ben P.  stopped running around, and started to vent a little. Frustrations were high on his part. First the Weelander, and then some new and unforeseen problem arose. The depth sensor was reading two seafloors, one at 80 meters depth, and one at 155 meters depth. WHICH TO BELIEVE?! It was suggested by Julian S. that perhaps there was a forest of trees below us. That surely would throw the sensor off.

What brought the mood back up was the return of the Weelander’s crew. Not one of the seamen on the small boat had a frown on their face; all were exuberant from the day’s operations. And finally, Big Boat ops could resume! Ben attempted his secchi disk, but the current was pulling it underneath and toward the back of the boat; secchi disk canceled. So he then scooped up some surface water for chlorophyll readings. Ian and Sean were told their sounding was getting pushed back to the next station. We switched to the next crew on watch (who were all at least ten minutes late). I did not get a confirmation, but it is assumed Ben’s net deployment went successfully, for why would the Oceanography Gods allow anything else to cause additional unneeded frustrations for that pour young man.

As the night continued on, CTD’s and a few more vertical net tows occurred at differing stations. Around midnight, I awoke again as watch 2 of the day had just begun. Nothing was going on except some sub-bottom profiling, so we were all relieved of duty. Julie was nice enough to notify a few students of a meteor shower tonight, peaking at 2:00 AM (that’s local time!). A couple of us grabbed some blankets and headed to the front deck. It was a strange mixture of beauty and eeriness. The moon lay low on the horizon, set behind a thin layer of wispy clouds. The surrounding hills were silhouetted against the golden light of the moon.  When one looked up, they were frozen in their tracks, as the sky was filled with stars. It seemed as though someone had sprinkled diamonds into the atmosphere above. As we waited and watched, streams of meteors caught our attention. We stayed and watched for maybe a half an hour or so. It was quite the night to remember. After, we all headed inside to our staterooms. Father time sprinkled us with his mists of sleep sands, and we drifted off to the sounds of the boat, until a bright new day of morrow began...