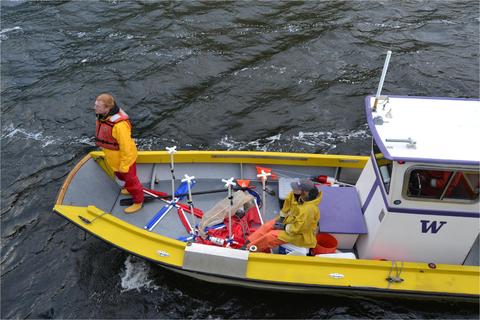 It’s the early morning, currently a lovely 5:07am, and we’re working on collecting more samples in the perpetual rain. Thus far we’ve conducted a CTD cast and are working on a multicore for Jordan’s project. As the morning wears on, we’ll be conducting more CTD casts, run a vertical and bongo net, and do another of Lisa’s plastic surveys. It’s too dark to see anything but black sky on black water, but I expect as the sun rises we’ll get more gorgeous views of the mist covered mountains – probably around breakfast time. There was snow on some of the mountains last night, and it was very pretty. As always, dinner last night was wonderful; India is a superb cook who really improves mood of everyone on the ship. Now that there is no fear of seasickness, everyone seems a lot more focused, and only inevitable time sinks like making more freshwater are slowing us down. Thankfully, we know what caused that so it won’t happen again, and when we get to fixing it, we won’t need to worry about it anymore. Despite the long hours everyone seems to be having a lot of fun, myself included. –Ian

We started our watch with an on-the-fly handover from the morning shift. They were undertaking an Underway CTD, which is an instrument you tow behind the boat while reeling the cable in and out so that the UCTD zigzags up and down through the water column, taking measurements of temperature, salinity, and pressure. It’s a great instrument because you can get a picture of the whole water column over a wide area, without having to stop all the time for full CTD casts. Overall we were successful, but there were some issues. The first, a minor problem, ended up with our reel tangled like fishing line, but was sorted out with quick thinking from our marine tech, Patrick. The second realization was that we missed some tape on deploying the second UCTD, which had been put over the sensors to protect them during storage. Unfortunately, this means a trek back to Gold River to resurvey the section. Though it will take some time, many are okay with the downtime after a pretty packed day of instrument casts.

Daniel and Chris spent the morning on the R/V Weelander deploying their self-built GPS drifters to measure currents in Muchalat Inlet. Their efforts were successful, so we saw some cold-but-smiling faces when they stopped by to pick Zoe up for an afternoon of bird surveys. Their luck continued for the rest of the expedition with Zoe spotting a bald eagle. The sighting was particularly magical with the bird perched majestically on branch with the sun setting over the cliffs of the fjord. She was also excited by a flock of over a hundred Harlequin ducks in full breeding plumage. – Gen and Alex

The night watch thus far has consisted of transiting a UCTD and more transiting. Running the UCTD is a pretty simple task, however, when it is a clear sky it can get kind of cold. That made standing outside for a few hours monitoring the UCTD a real treat. J However, despite the fact that a clear sky = COLD weather, a clear sky tonight meant we were able to see a meteor shower in addition to the many millions of stars! Seeing the stars from a ship in total darkness is an opportunity not many get. Living in Seattle, you can’t see that many stars due to city’s light pollution, but it are nights like tonight that re-instill in me the wonders of the cosmos.

We are transiting out of the safe haven – the calm waters of Muchalat Inlet – into Nootka Sound. This means that ship and the students alike will feel the waves tonight. Luckily though, we can escape the waves early morning after we enter Esperanza Inlet.

Good night from the night watch!

The UW Oceanography department has a unique requirement of its seniors: to participate in self-directed project design, data collection, data analys

It’s 3:40 AM, and the tossing of the ship has awoken me, beating my alarm to the punch. We are en route to Zaballos, the second inlet of several we set out to research during the cruise.

It’s our second day aboard the R/V Thompson and an early one at that. It’ll take some time adjusting to the new sleep schedule but there are some of us who may never adjust to being up and ready to go at 4 am

The buildup to today has been immense for everyone, final proposals were completed and turned in on Sunday