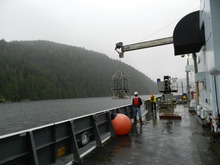 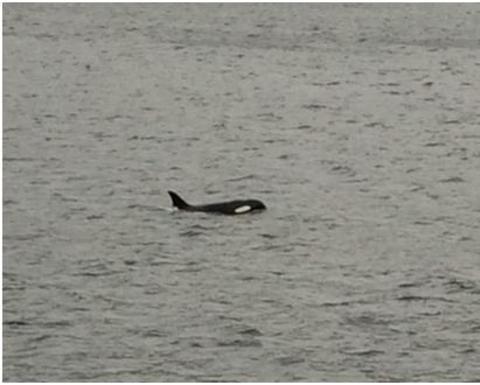 Morning watch continued the tradition of operating the UCTD although we had a break during sunrise when we deployed four drifters off the stern of the Thompson for another experiment that was taking place. After hoisting the Weelander off the ship we resumed operation of the UCTD until our watch was over. Forecasts were for rain all day but we've been lucky getting away with a few rain showers in the morning and a moderate breeze. While on rotation for operating the UCTD many games of ping pong have been played, more for myself than I'd care to admit, and word of a ship tournament is starting to spread...

Watch 2
We started watch slightly short on hands, with Daryn, Daniel and Ashley away on the Weelander. They were collecting more surface water samples throughout Muchalat and testing Daniel’s microswifts, which measure surface waves. After yesterday’s excitement of recovering the lost mooring from offshore, we thought today’s schedule of continuously running the UCTD was going to be a predictable….bordering on monotonous…watch. Daryn and Daniel returned at around 2pm and made everyone very jealous with their tales of discovering a pod of orcas and a minke whale. We soldiered on operating the UCTD and finally got our share of excitement when Lisa and I were on the aft deck and spotted some black dorsal fins and sprays of water. When we passed by them again we managed to get a better look, Erika managed to snap a good photo and noticed that one of the whales had a calf with her. Nearer the end of our shift we moved onto the second UCTD survey, instead of repeatedly crossing the eastern Willamson sill we moved to survey over the western Williamson sill, a survey which will last for another 14 hours but will hopefully allow us to determine the influence of the tides on the temperature and salinity structure of the area.

Once again, the students of the Night’s Watch take on the darker times of Muchalat Inlet, performing multiple UCTD casts and rotating through their shifts quickly and efficiently. Our watch was long and uneventful and as if we did not have enough of the UCTD, it decided to make a special appearance in our vivid dreams. On another note, dinner was the highlight of our night. The peanut sauce covered noodles were exquisite, pairing up well with the juicy flank steak sliced perfectly into long pieces. Handmade dumplings topped off the dish, making tonight one of our favorites. Although the watch tonight was not as exciting as dinner, we hope to tackle our last night of watch tomorrow, moving swift like a coursing river with the strength of a great typhoon, because it will definitely be busy, dark, and cold. . . winter is coming.

The UW Oceanography department has a unique requirement of its seniors: to participate in self-directed project design, data collection, data analys

It’s 3:40 AM, and the tossing of the ship has awoken me, beating my alarm to the punch. We are en route to Zaballos, the second inlet of several we set out to research during the cruise.

It’s the early morning, currently a lovely 5:07am, and we’re working on collecting more samples in the perpetual rain

It’s our second day aboard the R/V Thompson and an early one at that. It’ll take some time adjusting to the new sleep schedule but there are some of us who may never adjust to being up and ready to go at 4 am

The buildup to today has been immense for everyone, final proposals were completed and turned in on Sunday