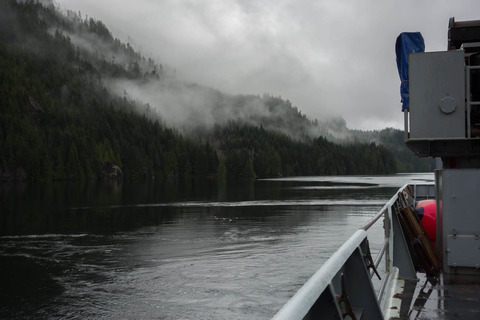 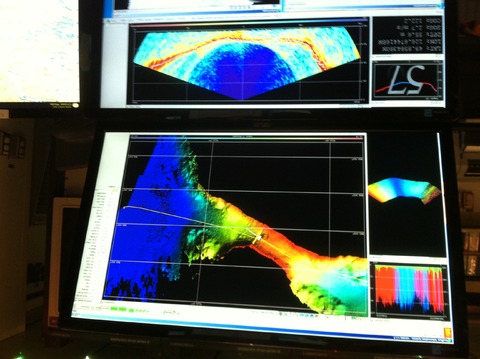 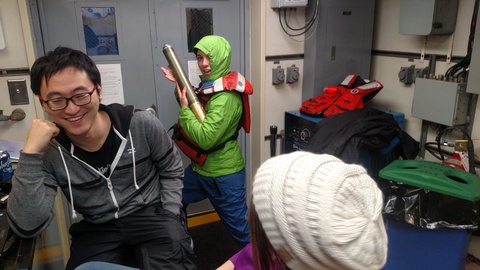 It’s Friday the 19th of December and the last full day of research up at Nootka Sound. We’ve had rain for the last 24 hour or so, but seeing as the majority of the trip has been rain free, I’d say we’ve been pretty lucky. Yesterday was a pretty good day both because our phenomenal stewards absolutely killed it with dinner (yet again) and the views were beautiful as we transited the narrows into Esperanza Inlet. Later in the evening….you thought I wasn’t going to go into detail about dinner and the views, don’t worry I was just messing with you. Chicken Parmesan, Roasted Beef with Gravy, Vegetable Lasagna, Mashed Potatoes, and Grilled Zucchini. This was followed by mini cheesecake with a berry sauce that can only be compared to the Ambrose that the Gods of Ancient Greece were said to have feasted on. My appetite sated I worked until 4 in the morning doing Underway CTD’s (Conductivity, Temperature, and Depth Measurements). The only downside about working the 0000 to 0400 shift is that there is no light to view the scenery which surrounds us. Earlier Yesterday when it was still light, we did see some amazing sights, one of which really sticks out: A Bald Eagle fighting with three other birds in the Tahsis Narrows.

After being relieved by the 0400 to 0800 watch, I spent the rest of the morning sleeping, as did the rest of my watch. Working hard to be the gold standard with which the other watches are held to is hard work and it wears a man/women down.

After waking up around 1030 and scarfing down a quick lunch I’m back at the surveying station watching the seafloor (inlet floor?) appear on a computer screen. Outside, more underway CTD’s are being cast. It’s really remarkable being surrounded by this new ocean tech that allows us to gain data more efficiently, but when the ship you are on costs $26.38 a minute (calculation done by The Charlie Erikson) efficiency is the name of the game.

As the watch grinds on, it’s a reminder that we are all almost done. We have one more 0000 to 0400 watch tonight/tomorrow and then after that we should be done as we depart for Seattle at 10:00 tomorrow morning. The seas on the way back are predicted to be a little rough, so hopefully everyone has their seasickness pills ready. That’s about all for now.