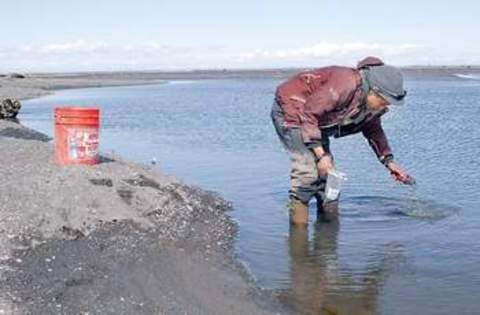 Sarra Tekola, an environmental science student at the University of Washington, scoops silt from a slackwater pool near the mouth of the Elwha River to test its composition. Photo credit; Keith Thorpe/Peninsula Daily news 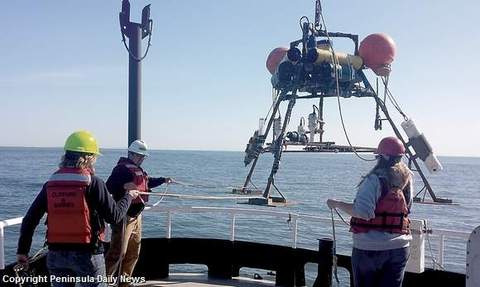 PORT ANGELES — The Elwha River mouth and the salt water around it served as a classroom earlier this month as University of Washington students studied how millions of cubic yards of sediment are interacting with the surrounding environment.

Ogston oversaw students taking water and sediment samples from the UW research vessel Barnes as it was anchored in the Strait of Juan de Fuca not far from the Elwha River's mouth west of Port Angeles.

Miller kept his feet on the ground, more or less, and led students who collected data on individual grain size and other attributes of the estimated 3.3 million cubic yards of sediment built up at the mouth.

The sediment, released through the $325 million Elwha River dam removal and restoration project begun in September 2011, continuously reshapes the river mouth as it arcs into the waters of the Strait.

The 108-foot, century-old Elwha Dam, which once created Lake Aldwell, was removed by March 2012. All but 30 feet remain of once-210-foot-tall Glines Canyon Dam.

Miller said the class allows students to use the dam removal project as a learning opportunity.

“We use this as a way to teach students about the process of science, about methods, ways to analyze and interpret data and ways to communicate,” Miller said.

“The ultimate goal is for students to practice science,” Miller said.

As part of the class, Ogston said students develop their own questions about the dam-removal process and conduct field research to find answers.

The students, ranging from college freshmen to those taking graduate-level courses, set off in the Barnes on April 10 bound for the waters just off the mouth of the Elwha River.

They collected data in numerous ways, Ogston said, from sampling water to determine the amount of sediment suspended in it to lowering mechanical scoops to collect clumps of sea-bottom mud from the Strait of Juan de Fuca.

The weather proved gorgeous for most of the excursion, Ogston said, though windy conditions did buffet the 60-foot vessel around a bit.

“People got seasick, but they were great troopers and didn't let it stop them,” Ogston said.

“I'm pretty impressed with this group.”

Most of the students' research projects centered around how the sediment released through dam removal could impact the ecosystems surrounding the river mouth, Ogston said.

The students also became part of a larger research project of hers studying how the visually stunning plumes of sediment flowing into the Strait ultimately reach the surrounding sea floor.

“As a marine geologist, [I'm] using the dam removals to act as a laboratory for understanding how very heavily laden river plumes act [and how] they reach a marine environment,” Ogston said.

In the coming months, the students will organize and analyze the data they collected to write research papers interpreting their findings.

More than just a class taken for a grade, Ogston said the experience will hopefully allow students to determine if this sort of research is something they ultimately want to pursue.

“I think it gets them a lot of good experience in addressing those questions to decide what their future is going to be,” Ogston said.

Sarra Tekola, an environmental science student at the University of Washington, scoops silt from a slackwater pool near the mouth of the Elwha River to test its composition. Photo credit; Keith Thorpe/Peninsula Daily news

The biggest dam removal in U.S. history is underway on the Olympic Peninsula’s Elwha River, and major changes are happening in the marine enironment.

Salmon are beginning to swim up the Elwha River for the first time in more than a century. But University of Washington marine geologists are watching what’s beginning to flow downstream.