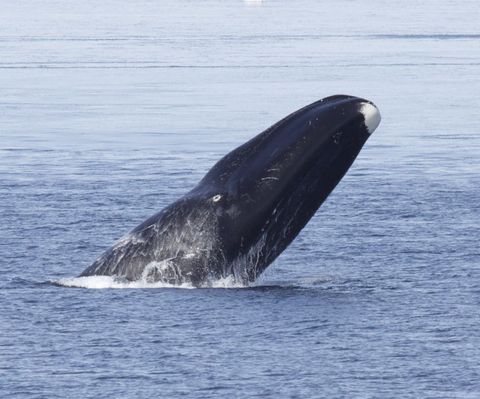 We were not expecting to get five months of straight singing.”

When a University of Washington researcher listened to the audio picked up by a recording device that spent a year in the icy waters off the east coast of Greenland, she was stunned at what she heard: whales singing a remarkable variety of songs nearly constantly for five wintertime months.

Kate Stafford, an oceanographer with UW’s Applied Physics Lab, set out to find if any endangered bowhead whales passed through the Fram Strait, an inhospitable, ice-covered stretch of sea between Greenland and the northern islands of Norway. Only around 40 sightings of bowhead whales, which were hunted almost to extinction, have been reported there since the 1970s.

Stafford and colleagues put two hydrophones, or underwater microphones, on moorings attached to the seafloor in Fram Strait, leaving them there for as long as the batteries would last: nearly a year. Since the population of bowhead whales likely to pass through was thought to number in the tens, they didn’t anticipate much interesting data.

“We hoped to record a few little grunts and moans,” Stafford said. “We were not expecting to get five months of straight singing.”

Not only did they record singing nearly every hour of the day and night, they picked up more than 60 unique songs. A paper detailing their discoveries appears Tuesday (July 31) as the feature article in Endangered Species Research and is openly accessible online.

We were not expecting to get five months of straight singing.”

Oceanographer's Underwater microphones Eavesdrop on the Secret Lives of Whales