“His passionate message about the oceans enthralls audiences 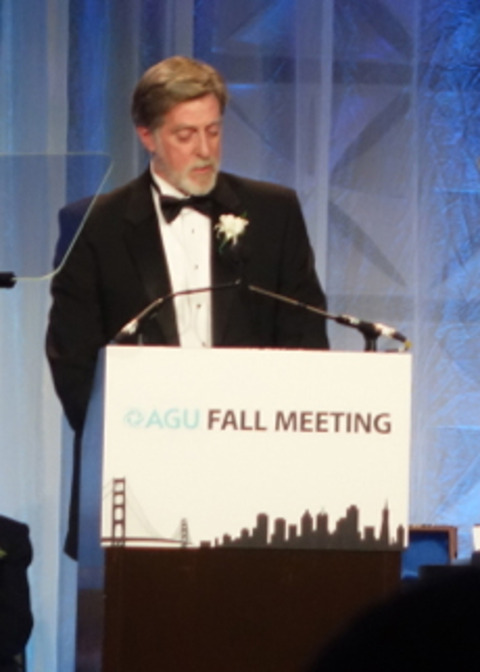 John Delaney at the awards ceremony during the American Geophysical Union’s fall meeting.

The American Geophysical Union presented the Spilhaus Award, the organization’s top prize for engaging the public in science, to the University of Washington’s John Delaney during an awards ceremony Wednesday (Dec. 5) in San Francisco.

Delaney, a professor of oceanography, is director of the Regional Scale Nodes, a cabled underwater research facility being constructed off Oregon and Washington that’s one component of the Ocean Observatories Initiative.

“John’s powerful outreach and innovative activities developed public support for the vision of the powerful and technologically advanced ocean observing system now under construction,” the AGU citation says. “His passionate message about the oceans enthralls audiences, and he is a highly sought after speaker giving more than 50 invited talks a year. . .He is as excited to share his excitement with school children as with TED audiences and national committees.”

“His passionate message about the oceans enthralls audiences

John Delaney at the awards ceremony during the American Geophysical Union’s fall meeting.