The nodes are, in many ways, the brains of the system 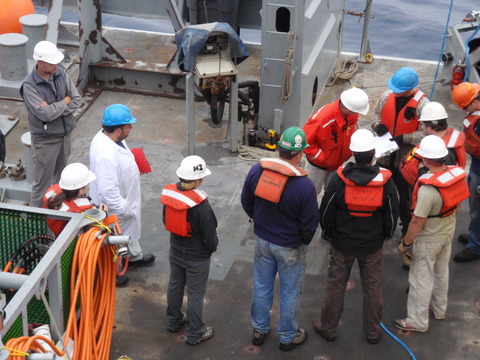 The first U.S. cabled ocean observatory reached a milestone on July 14 with the installation of a node 9,500 feet deep off the coast of Oregon. Like a giant electrical outlet on the seafloor that also provides Internet connectivity, the node was spliced into a network of cable segments totalling some 560 miles that were laid in the summer of 2011.

Six more of these primary nodes -- each about the size of a Volkswagen Beetle -- are being installed this summer. Smaller secondary nodes will be installed in 2013 and will transfer power and communications from the primary nodes to experimental sites.

The project, designed to deliver real-time ocean observations for 25 years, is part of the National Science Foundation’s Ocean Observatories Initiative. The construction and early operations of the cabled observatory, known as the Regional Scale Nodes component, is led by the University of Washington.

The nodes are, in many ways, the brains of the system, designed to distribute power and two-way communications to a network of ocean observing sensors, instruments and moorings that are scheduled to begin operating in late 2013. When fully completed in 2014, the regional cabled observatory will provide real-time information on ocean phenomena such as active underwater volcanoes, gas hydrate deposits, major ocean currents and rich environments of marine plants and animals. Anyone with a connection to the Internet will be able to see what's happening at the study sites.

The first installed node now rests in its intended home for the next 25 years: on the seafloor at a study site named Hydrate Ridge, some 75 miles southwest of Pacific City, Ore. Depending on good weather and successful testing results, the last node should be installed on Aug. 16.

“The Primary Node installation is a unique operation, a precision act requiring constant and simultaneous monitoring of the cable tension and node positioning,” said Cecile Durand, Ocean Observatories Initiative marine maintenance manager at the UW. “Our team, including contractor L-3 MariPro, has worked for several months to evaluate a number of installation scenarios and we are ready for the challenges.”

Durand is part of the Ocean Observatories Initiative team aboard the installation vessel Dependable, owned by TE SubCom. Follow installation progress via her blog posts.

Two primary nodes will be installed on cables that reach Hydrate Ridge, at the base of the Oregon continental margin, and two more will monitor another main study site, Axial Seamount, about 300 miles west on the Juan de Fuca Ridge. Two nodes will be at the Endurance Array site for coastal studies overseen by Oregon State University. Another primary node, in the middle of the Juan de Fuca plate, will act as a placeholder with minimal internal electronics available for future network expansion.

The nodes are, in many ways, the brains of the system

UWTV to Air "Down to the Volcano"

Explore an underwater volcano with UW oceanographers as they use the ROPOS ROV deployed from the R/V Thompson.

Not all earthquakes are equal. There are the long-lasting, magnitude 5-6 earthquakes that occur regularly beneath the Puget Sound

The Cable has landed

Submarine cables for the nation’s first regional cabled ocean observatory made landfall last week on the Oregon coast. The cable