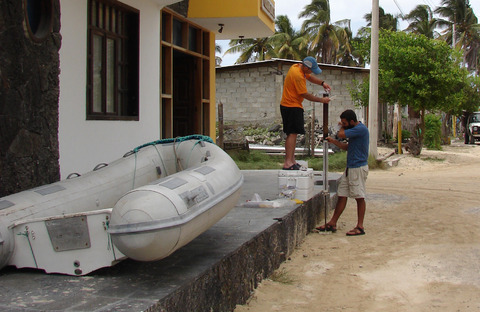 This new approach is the first quantitative reconstruction of these tropical climate parameters, rather than just saying it was 'wetter' or 'drier,'" said co-author Julian Sachs

By Hannah Hickey
News and Information

When it comes to Earth's climate, what happens in the tropical Pacific Ocean has an outsize influence. The climate state of the vast equatorial Pacific, which covers half the planet, affects weather patterns around the globe.

University of Washington oceanographers used clues from the Galapagos Islands — a dot in the middle of the Pacific Ocean — to trace El Niño patterns and seasonal tropical rains over the past 2,000 years. Evidence shows shifts that last for centuries, suggesting these tropical climate patterns have varied more radically and for longer durations than previously believed.

The study is published the week of March 14 in the Proceedings of the National Academy of Sciences.

"This is one of the most representative records of precipitation changes in the eastern Pacific, and it goes a good way toward explaining seasonal tropical rain band and El Niño dynamics," said first author Daniel Nelson, who did the research for his UW doctorate in oceanography.

"We want to understand not just if precipitation has changed in the past, but why," he added. "If we can understand the mechanisms that caused these changes, then we can better predict how precipitation might change in the future."

Nelson collected sediments in June 2008 from three lakes on the edge of Isabela Island, the largest island in the Galapagos chain off Ecuador. The island sits directly on the equator, at sea level and far from any high elevation, so what happens there is a good indication of what's happening in the wider tropical Pacific Ocean.

He studied remains of two organisms — a microscopic algae and the waxy coating of mangrove leaves — for clues to the amount of past rainfall. The form of hydrogen atoms preserved in molecules left behind by these organisms in the sediments tracks the rainfall intensity. (When tropical precipitation is more intense, the raindrops include more of the lighter form of hydrogen.)

Simply measuring the amount of rainfall could track either the strength of El Niño or the Intertropical Convergence Zone, a global atmospheric feature related to the trade winds that moves north and south each year, bringing heavy rains and seasonal flooding in its path.

So the researchers also looked for evidence of past sea level, which changes much more with El Niño than with the Intertropical Convergence Zone. Chemical clues in the mangroves and algae can also tell how salty the water was, which shows whether or not El Niño was raising the local sea level and causing more seawater to seep into the coastal wetlands.

"This new approach is the first quantitative reconstruction of these tropical climate parameters, rather than just saying it was 'wetter' or 'drier,'" said co-author Julian Sachs, a UW professor of oceanography. "By providing historic climatological data we will be able to model future changes in tropical climate."

Results show that from the beginning of the record 2,000 years ago, until the year 1400, most rainfall changes on the island were indeed related to El Niño.

The record also shows long-term shifts. Heavier rainfall at the study sites from the year 0 to 400, and again during Europe'sMedieval Warm Period, just before the Little Ice Age from about the year 800 to 1300, was probably caused by a centuries-long strengthening of El Niño.

But during the Little Ice Age, a period from roughly 1400 to 1850 when temperatures in Europe were cooler and many of Earth's glaciers expanded, the biggest changes came from the Intertropical Convergence Zone shifting to the south.

Recent research has shown that the position of the Intertropical Convergence Zone, and the associated rainfall and drought, is tied to the temperature balance between the Northern and Southern hemispheres.

"It's consistent with what we understand about the changes in the ITCZ that it might have been positioned further south when the Northern Hemisphere was cooler," Nelson said.

These samples augment other marine records such as coral and seashells, which provide detailed records over a short time period, and deep-ocean sediments, which preserve thousands of years of history but are harder to date precisely.

"These lake sediment records are a nice complement because they sort of span the gap," said Nelson, who is now a postdoctoral researcher at the University of Basel in Switzerland.

This winter, Sachs got a rapid-response grant from the National Science Foundation to measure the effect on Galápagos lakes of the first strong El Niño event in 18 years. In January, Nelson and Alyssa Atwood, another former UW doctoral student in Sachs' group, installed sensors and collected samples. The observations will be used to allow more precise reconstructions of historic climate shifts.

The research was funded by the National Science Foundation and the National Oceanic and Atmospheric Administration.

This new approach is the first quantitative reconstruction of these tropical climate parameters, rather than just saying it was 'wetter' or 'drier,'" said co-author Julian Sachs