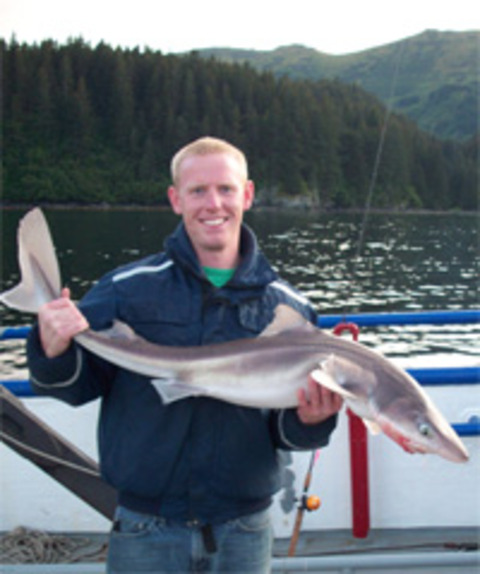 Something about the ocean just sucked me in, the mystery of it, I guess. 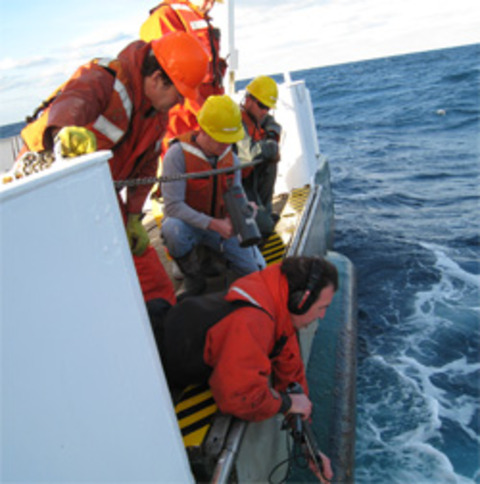 Off the Florida coast, recovering a bottom-mounted tide gauge

Why did you choose to come to the UW?

It actually might seem kind of weird how I ended up at UW, but to be perfectly honest, I’m a huge college sports fanatic, and I just loved the thought of rooting on the DAWGS as a UW student. I grew up playing the trumpet and thought I’d join the UW Marching Band. That way, I’d get to travel all over the country following the football team, not to mention that the UW Marching Band is quite an acclaimed group of musicians. Also, the amazing academic opportunity the University of Washington offers is unrivaled at other universities. Its reputation as one of the top research universities in the country certainly played a large role in my decision to come to UW. So I ended up moving from Northern California to Seattle…the rest is history, as they say.

Why did you decide to major in Oceanography?

I took an introductory course (Oceans 102) early in my freshman year and took an immediate liking to the oceanography field. Something about the ocean just sucked me in, the mystery of it, I guess. A lot of my friends were headed down the business path, and I just knew that wasn’t for me! I grew up camping and fishing and taking vacations up and down the California coast, so something just seemed right about oceanography. That, and each course I took after that first one had me wanting to learn more.

Describe your research and field experiences while at the UW

I suppose my research experience began on an overnight trip in Hood Canal on the R/V Barnes. I was studying the productivity of phytoplankton, attempting to dissolve the mystery of how and why Hood Canal periodically went anoxic, killing fish and the like. It was this very first research project that really ingrained into me that the ocean is so complex, and that there are so many variables to any one problem or mystery you are trying to solve that there truly is no one method to answer any issue no matter how simple or complex it may seem. This discovery only intrigued me more and pulled me head first into the field of oceanography.
My junior year I got a job working for Paul Quay in his Stable Isotope Laboratory extracting CO2 from sea water samples from all over the globe. This was a fun job….. for about the first 100 samples I ran…ha, ha, then the only things that kept me there till the end of my senior year were the great people, Johnny Stutsman (The Boss), Bonnie Chang, Synthia, and Andrew Clos, just to name a few. Paul is a great guy, by far one of my favorite professors as an undergraduate, particularly his blunt “four-letter-word” as he might call it, New York style of engaging the entire class in his lectures really nailed the key points of his lectures, for me at least…I digress.
Lastly, for my Senior Thesis Project I researched phytoplankton “thin-layers” in Glacier Bay, Alaska. That two-week cruise was a trip I’ll never forget. My research project, seeming so solidly planned out and meticulously designed, quickly fell to shambles in the field some 900 miles from home. I had to scramble to salvage my project on the very first night in Glacier Bay, rethinking what had taken two quarters to plan, but that’s oceanography in a nut shell. You never know what the ocean might throw at you, and even with a well thought out plan, the best oceanographers are great improvisers and able to adapt to the ever-changing field conditions.

Where have you worked since graduating?

I was hired right out of school by SAIC (Science Applications International Corporation) as a Marine Scientist (SAIC Aquatic Sciences - Marine, Freshwater and Wetlands). My primary responsibility is carrying out successful field projects. I have been with SAIC for just about 2 years now, and the job has offered me some of the best experiences of my life, thus far. My first travel experience took me to the Gulf Stream where we mapped the continental shelf (~70miles offshore) using multi-beam and side-scan sonar for the US Navy. My next project was a local Dungeness crab study down in Willapa Bay, WA for the Department of Ecology. Since then I’ve been to Kodiak, AK, under contract to NOAA doing a current meter study using ADCP’s (acoustic doppler current profilers), 50 miles offshore of San Francisco taking pictures of the seafloor 3000m below the ocean surface using a SPI camera (sediment profile imagery), over in Hood Canal beach seining for salmon along the Bangor Submarine Base shoreline determining the impact of the base on the returning salmon populations, as well as many areas of Puget Sound taking sediment cores for toxic chemical analysis.

Future projects on the books include another trip to Alaska for NOAA, this time to Dutch Harbor for another current study that I am excited about, beginning this June. Who knows, maybe the next one is in Hawaii?

Where do you work now, and what do you like about it?

I love my job because of all the opportunities it offers. Working in consulting, a wide variety of projects come through the door so you have the opportunity to get involved in what you are most interested in. Not to mention, I am an avid fisherman and the opportunities have been great in the down time while on trips. From catching tuna in the waters off Florida to halibut in Alaska working long long hours in the field does have its perks!

Something about the ocean just sucked me in, the mystery of it, I guess.

Off the Florida coast, recovering a bottom-mounted tide gauge

Alumni of the Program are employed in these fields and more