University of Washington, School of Oceanography

Our lab focuses on the unique adaptations of marine microorganisms –– from bacteria, archaea, and their viruses to sea-ice algae –– that allow them to survive and even thrive in extreme environments, particularly within porous structures like sea ice and marine-influenced permafrost (called cryopegs). Current research, supported by the Gordon and Betty Moore Foundation, addresses the role of gene exchange, especially as mediated by viruses, in facilitating microbial life under the extreme conditions of subzero brines, as occur in sea ice and cryopegs. Past research has addressed microbial life in other porous structures, including pelagic particle aggregates, coastal to deep seafloor sediments, and hydrothermal vents, often with a view towards the influence on carbon and other elemental cycles.

As cold adaptation in marine microorganisms has relevance to polar geochemistry and ecology, we have contributed to and benefited from involvement in interdisciplinary Arctic research projects over the years; e.g., the overwintering Canadian Flaw Lead System Study, CFL, aboard the Canadian research icebreaker Amundsen during the International Polar Year, 2007–2009; the Nansen Amundsen Basins Observational System, NABOS, aboard the Russian icebreaker Kapitan Dranitsyn, 2005; the overwintering Canadian Arctic Shelf Exchange Study, CASES, aboard the Amundsen, 2003–2004; the International Northwater Polynya project, NOW, aboard the Canadian icebreaker Pierre Radisson, 1997–1999; and the International Northeast Water Polynya project, NEW, aboard the USCG icebreaker Polar Sea, 1992–1993. We currently have team members onboard the joint Swedish-US expedition to the North Pole aboard the Swedish icebreaker Oden in August–September 2018..

Underlying our work is a keen interest in the limits of microbial life, especially in frozen environments, as they relate to astrobiology (UW Astrobiology Program), biotechnology and bioremediation (UW Marine Bioremediation Program). See some of our work featured at these UW School of Oceanography links: Frost Flowers Foster Microbes; Bacteria in Ice. Although we have been focused on low-temperature limits in recent years, we retain interests in the role of hydrostatic pressure in the evolution and ecology of marine bacteria at both very cold (in deep-sea and polar environments) and very hot (at hydrothermal vents) temperatures. 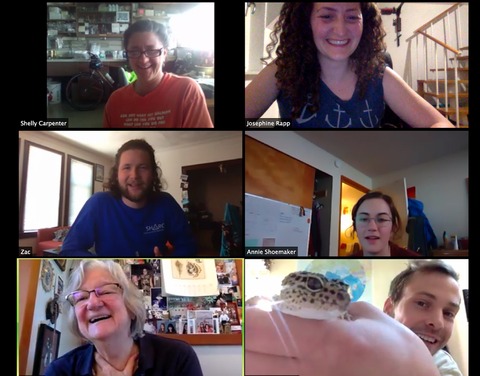 Analyzes marine communities associated with the porous boundaries of the ocean, from sedimented seafloor and hydrothermal vents to sea ice (inver

Recent years show unprecedented change in the ice-covered Arctic Ocean. What is currently known about the complex Arctic Ice-Ocean system and the ecosystems it supports?

Examines marine organisms, their quantitative distribution in time and space, and their interactions with the ocean. Emphasizes dominant pelagic