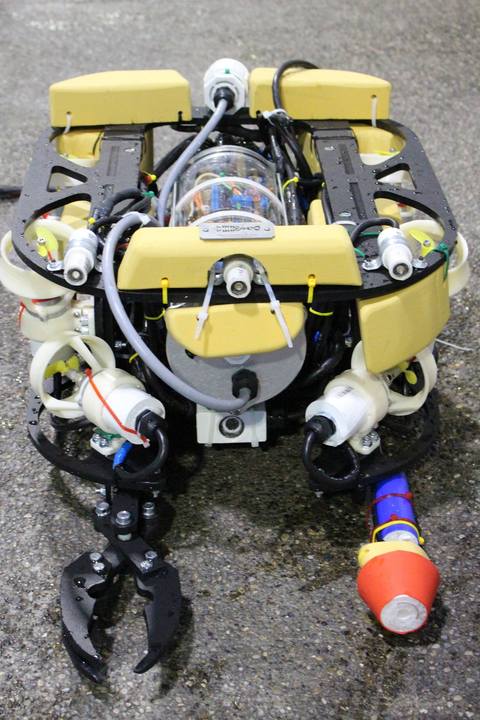 These students have now surpassed many of us in the industry in both knowledge and skills related to ROV design and building. Rick Rupan

At this year’s Marine Advanced Technology Education (MATE) International Competition in St. John, Newfoundland, three high schoolers from Seattle nabbed the top prize for their ocean-ready remote-controlled submersible, beating teams from Russia, China, and Canada to name a few. Mentored by UW oceanographers, the group—named AMNO & CO—competed against 33 teams from six countries, proving that even the smallest team in their division could come out on top.

“I’m very proud of AMNO & CO. We [at the UW] showed them a path and got them started off on the right foot, and they really took it from there,” said Rick Rupan, a UW research engineer and an advisor to the group.

The annual competition is designed to challenge teams from across the globe to develop the next generation of ocean technology. For this year’s event held in June, teams worked to design and build Remotely Operated Vehicles (ROVs) capable of addressing potential issues associated with increased offshore oil drilling in the world’s polar regions. Alex Miller, Nicholas Orndorff, and Clara Orndorff—two sophomores and a senior at two Seattle high schools (Garfield and Ingraham)—accepted the challenge.

Their interest was sparked six years ago when the School of Oceanography’s Rick Rupan spoke to students at Hamilton International Middle School in Seattle about his work. He highlighted the scientific uses for underwater robots, specifically their ability to monitor environmental conditions and perform important underwater tasks. He also introduced students to real ocean-going tools, an Argo float and Seaglider from the UW. Shortly after his presentation, the three students reached out to Rupan about how they could get more involved in the type of science he had talked about.

Between 2009 and present, Rupan, his colleague Fritz Stahr, and others from the School of Oceanography, helped the team learn the ins-and-outs of engineering ROVs. In addition to seeing their skillsets grow, they witnessed the team’s literal growth from middle to high school.

The outreach and support offered by UW staff, including purchasing materials to teach the trio how to build their first rudimentary ROV, was made possible by a National Science Foundation (NSF) grant to MATE and by support from the Marine Technology Society (MTS). Part of the NSF grant aimed to get more underrepresented groups into STEM careers. Clara will be a freshman at the UW starting in September 2015. She’s coming in with a scholarship from MTS and plans to study engineering.

Oceans play a big role in our day-to-day, from driving climate and weather to enabling efficient trade and transport. Inspiring curiosity and passion for the oceans in K-12 students can help unlock lifelong passions for engineering and science. Thanks to people like Rupan and his team, students will continue to be introduced into the STEM pipeline that will open the door for lifelong engagement with STEM.

These students have now surpassed many of us in the industry in both knowledge and skills related to ROV design and building. Rick Rupan