mangroves, past, present, and future 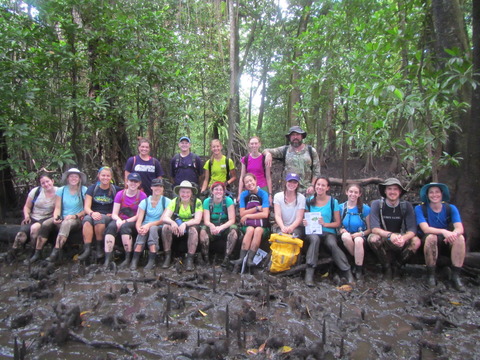 For about an hour, we searched for defining characteristics of each species of mangrove, meticulously sketched these features in our field note books, and then continued on to find more trees. Honestly, the feat felt hopeless. 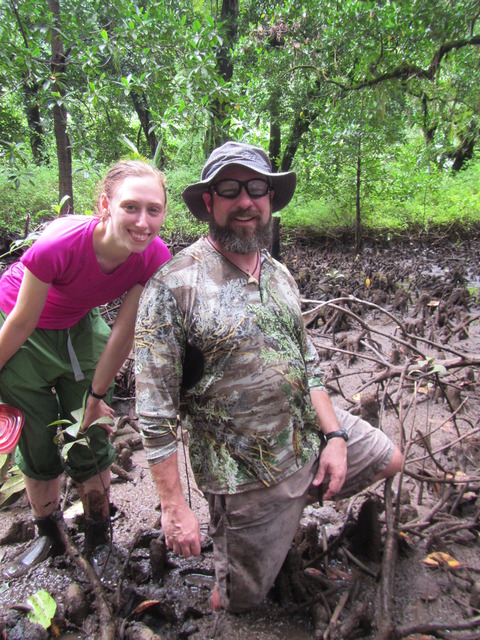 Dax Soule stuck knee deep in the mud and the Utwe Bioreserve, assisted by Marta Wolfshorndl. Both are Oceanogrpahy Graduate Students and  Ocean 496 TAs. 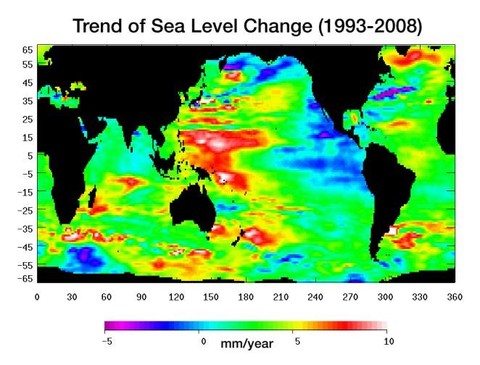 Stepping into the mangrove swamps is like stepping back in time. With peat accumulating at 1mm/year, one misstep in the mud, can sink your feet a meter below. With your hips submerge in the present, the tips of your toes, a meter below, are taken a 100 years back in time. On Monday, August 25th, the group took their first step back, and ventured into the muddy and verdant swamps. I think the first thing we all noticed about this new place was the unusual smell of rotten eggs, a result of sulfate reducing bacteria that call the swamp’s anaerobic soil home. These bacteria are hard at work, breaking down organic matter, such as fallen leaves and decaying insects, and provide an enormous ecosystem service by facilitating the recycling of nutrients back into the swamp land.

As we trudged further into the swamp, it was hard to keep our focus. The curriculum for day one in the swamps consisted of learning mangrove identification. The fifteen of us were divided up into five groups of three, and together we trekked through the mud, trying to find a tree that matched the mangrove species depicted on the provided field identification cards. For about an hour, we searched for defining characteristics of each species, meticulously sketched these features in our field note books, and then continued on to find more trees. Honestly, the feat felt hopeless. The smell of sulfur was nauseating and the mud was treacherous –the ground was always slipping from beneath our feet (well mine in particular), leaving you stuck knee deep in a hole. It was quite a struggle getting all fifteen of us to identify each of the six species present: the Nypa, Sonneratia, Rhizophora, Bruguiera, Barringtonia, and Xylocarpus. Dax, Marta, Julian and our local guide for the day, Carlos, helped each of us navigate the swamp and the subtle (and not so subtle once you got it down) tricks of identifying the species.

Upon our return to the lovely Nautilius Resort, we dove straight from the field into the classroom –learning all about the vital ecosystem services that mangroves provide and the threats of a rising sea level on their viability. Julian imparted a bit of his wisdom in our jetlagged and exhausted minds. Having now traversed through the swamps and having seen the mangroves first hand, it was fascinating to learn about the risks that they face in a world that has industrialized, leaving this tiny, undeveloped island behind to drown in the consequences. From our summer homework, we learned that the sea level off the Washington coast is rising at a rate of 1mm per a year. However, sea level measured off the coast of Kosrae has risen 7mm/year from 1993-2008 (figure 1). The rising waters are drowning the mangroves, which as intertidal zone plants need to have a freshwater.Thus, with peat building up at a rate of 1mm/year, a sea level rise far exceeding this has resulted in a die back of the mangroves.

So what’s the big deal? The problem that Kosrae faces in context of a rising sea is that, as an island, they are slowly disappearing. Ways in which they can slow the inundation of their island include building up the coral reefs and mangrove forests. Coral reefs provide an extra barrier to wave erosion and the mangroves help absorb wave energy, they also trap sediment in their roots and help to extend the coast line laterally. They also provide necessary habitat for juvenile reef fishes, mangrove crabs, and help promote the sulfate reducing bacteria which recycles nutrients. The mangroves and the reefs have a symbiotic relationship, with the mangroves reducing sediment transport, keeping the ocean waters a clear blue, and allowing the photosynthetic corals to thrive. The corals, in turn help reduce the wave energy impacting the mangroves, thus improving their lateral stability. Therefore, healthy mangroves mean healthy corals, and healthy corals mean a healthy Kosrae.

Kosraeans, themselves, benefit from the mangroves and corals in direct and indirect ways. Directly, they harvest the mangroves for firewood and building materials, and from the swaps they harvest the mangrove crabs. The corals sustain a huge diversity of marine life, from reef fishes to stingrays and reef sharks. The kosraeans turn to the reefs for subsistence, eating a diet containing largely fish protein. Indirectly, or as often not considered by the locals, the mangroves provide the people with a barrier between them and the sea, they also benefit from their service as nursery habitat for the reef fishes. Kosraean reefs are among the most pristine reefs in the world, personally, I can attest to this fact.

So while stepping into the mangroves may take you back in time, we should turn to them when looking for ways to protect Kosrae in the future.

For about an hour, we searched for defining characteristics of each species of mangrove, meticulously sketched these features in our field note books, and then continued on to find more trees. Honestly, the feat felt hopeless.

Dax Soule stuck knee deep in the mud and the Utwe Bioreserve, assisted by Marta Wolfshorndl. Both are Oceanogrpahy Graduate Students and  Ocean 496 TAs.

Ocean 496: Coastal Ecosystems of Micronesia in a Changing Climate

On August 21, 2014, fifteen University of Washington undergraduate students will embark on a 23 day intensive oceanography fieldwork course in Kosrae, Micronesia