Mirage on the Amazon

Probing carbon cycling on the Amazon

The Amazon region of Brazil. The red marker is Santarem, Brazil, where Professor Richey and his team set out for their measurement campaign. 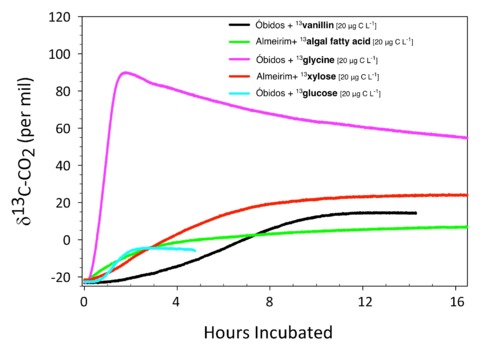 The response in 13CO2 observed after the injection of isotopically-labeled organic substrates into a closed system incubation chamber (Ward et al., in review). The incubation chambers were directly interfaced to the Picarro G2201-i analyzer.

This story starts more than 20 years ago when Professor Jeffrey Richey’s research group started to consider the importance of the tropics, and particularly, the Amazon basin, to the global carbon cycle.  With the “missing sink” of the global carbon cycle in mind, they wanted to investigate if the Amazon was responsible for taking up carbon from the atmosphere, releasing carbon to the atmosphere, or in balance.  Although mature rainforests are responsible for storing carbon, deforestation is slowly changing this balance. In addition, carbon rich soils can be leached with organic carbon transported to the river network.  As a result, carbon balance in this river network is an open question.  How much carbon is being transported to the oceans as dissolved inorganic carbon (DIC) and total organic carbon (TOC)?  And how much, if any, CO2 is being lost to the atmosphere by the river itself? To help answer these questions, Richey’s group started collaborating with scientists from the Centro de Energia Nuclear na Agricultura, Universidade de São Paolo (CENA-USP) to take discrete water samples in the field that could be analyzed for their DIC, DOC and dissolved gas content.

Richey et al. (2002) first published findings from these discrete sample campaigns in Nature and they suggested evasion of CO2 from the Amazon River system was responsible for thirteen times more carbon export than export by TOC or DIC.  These findings were significant as they changed the way we thought about the balance of carbon in the Amazon, and potentially the global carbon cycle.  By previously ignoring this significant flux to the atmosphere, we were inadvertently thinking that the Amazon was storing more carbon than it was releasing. In fact, Richey’s work implied that the carbon budget of the Amazon was in balance.

Richey’s group has been focused on refining their understanding of this carbon balance ever since. In particular, they have asked what is the source of all of this carbon that is fluxing out of the river system?  Is it ultimately coming from the carbon-rich soils of the Amazon? What about litterfall, or all of those leaves and other sources of organic material, that fall directly into the river system or are swept up into the waters as they rise seasonally?  And then there is the dissolved organic carbon (DOC) found in the local groundwater. Each of these sources of carbon have the potential to be respired in the aquatic ecosystem and then fluxed out to the atmosphere as CO2. Measurements published by recent PhD graduate Ward et al (2013) in Nature Geoscience provided some of the first evidence that the structural components of terrestrial plants (e.g. lignin) are much more reactive than historically assumed, supporting 30-50 % of the bulk respiration in the Amazon River.

Although Richey and colleagues have been measuring CO2 efflux from the Amazon for a couple of decades, the way they make dissolved gas and flux measurements is rapidly changing.  Since utilizing Picarro’s field-deployable CRDS analyzers, they have the ability to make isotopic measurements in the field and in real-time.  This enables them to update their research campaign on the fly and allows them to be more agile and aggressive in pursuing their research goals.

Early this summer, using a Picarro G2201-i owned by CENA-USP, the team took their lab to the field on the Mirage. They outfitted the Mirage with a state-of-the art lab facility with air-conditioning, an Uninterrupted Power Supply (UPS) and a pumping system that delivered river water directly to the lab.

Once underway they were able to measure in-situ dissolved gas profiles using a marble equilibrator system, and they also set up large volume incubation experiments for headspace CO2 and CH4 isotope measurements. In so doing, they were able to identify large spatial variability in concentrations of dissolved gases, both across the river and with river depth.  In addition, their incubation experiments were designed to help the team probe the source of the CO2 flux by examining the reactivity of different types of compounds and plant materials that were labeled with 13C (Figure 4). By seeing responses in the isotopic composition of CO2 in real-time, the researchers were able to adjust their incubation experiments on demand, inspiring transformative research. Picarro is excited to support Richey and his team on their efforts to help close the budget of the global carbon cycle, and look forward to reading their scientific results in the future.

The Amazon region of Brazil. The red marker is Santarem, Brazil, where Professor Richey and his team set out for their measurement campaign.

The response in 13CO2 observed after the injection of isotopically-labeled organic substrates into a closed system incubation chamber (Ward et al., in review). The incubation chambers were directly interfaced to the Picarro G2201-i analyzer.

Amazon Dams Keep the Lights on But Could Hurt Fish, Forests