The National Science Foundation announced that it has awarded a coalition of academic and oceanographic research organizations a five-year, $220 million contract to operate and maintain the Ocean Observatories Initiative. The coalition, led by the Woods Hole Oceanographic Institution, with direction from the NSF and guidance from the OOI Facilities Board, will include the University of Washington, Oregon State University and Rutgers, The State University of New Jersey.

The OOI is an advanced system of integrated, scientific platforms and sensors that measure physical, chemical, geological and biological properties and processes from the seafloor to the sea surface in key coastal and open-ocean sites of the Atlantic and Pacific. as designed to address critical questions about the Earth–ocean system, including climate change, ecosystem variability, ocean acidification, plate-scale seismicity, submarine volcanoes and carbon cycling with the goal of better understanding the ocean and our planet. All OOI data are freely available online. 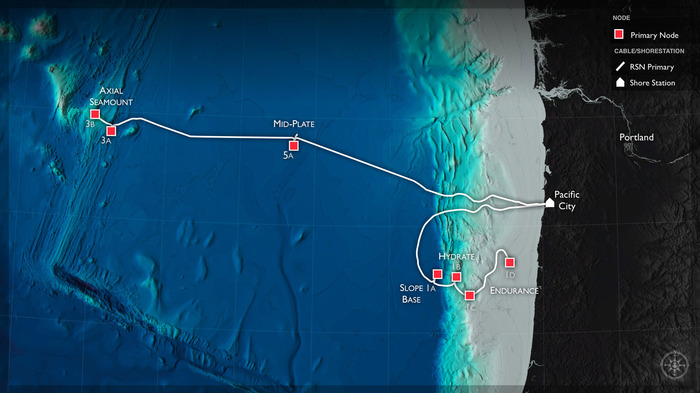 The seafloor cable extends off the coast of Oregon and allows real-time communication with the deep sea. University of Washington

Each institution will continue to operate and maintain the portion of OOI assets for which it is currently responsible: the UW will operate the Regional Cabled Array that extends across the Juan de Fuca tectonic plate and overlying ocean; OSU will operate the Endurance Array off the coast of Washington and Oregon; WHOI will operate the Pioneer Array off the Northeast U.S. coast and the Global Arrays in the Irminger Sea off the southern tip of Greenland and at Station Papa in the Gulf of Alaska; and Rutgers will operate the cyberinfrastructure system that ingests and delivers data for the initiative. In addition, WHOI will serve as the home of a new OOI Project Management Office.

“We at NSF are proud of our continuing investment in 24/7 streaming data from the ocean and coupled Earth systems,” said William Easterling, NSF assistant director for geosciences. “From underwater volcanoes to ocean currents, OOI enables cutting-edge scientific discoveries and makes big data accessible to classrooms at all levels. These data are key to addressing everyday challenges, such as better storm predictions and management of our coastal resources.”

The OOI officially launched in 2009, when the NSF and the Consortium for Ocean Leadership signed a cooperative agreement to support the construction and initial operation of OOI’s cabled, coastal and global arrays. The launch represented the culmination of work begun decades earlier, when ocean scientists in the 1980s envisioned a collection of outposts in the ocean that would gather data around the clock, in real- and near-real time for years on end, and enhance the scientific community’s ability to observe complex oceanographic processes that occur and evolve over time scales ranging from seconds to decades, and spatial scales ranging from inches to miles. 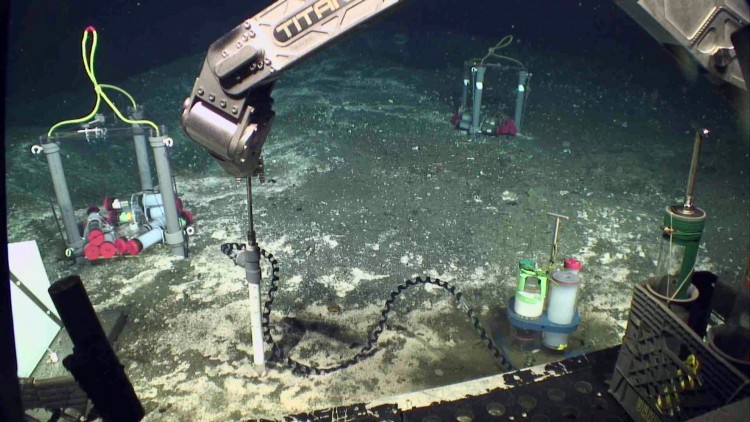 The OOI currently supports more than 500 autonomous instruments on the seafloor and on moored and free-swimming platforms that are serviced during regular, ship-based expeditions to the array sites. Data from each instrument is transmitted to shore, where it is freely available to users worldwide, including members of the scientific community, policy experts, decision-makers, educators and the general public.

The UW operates the largest single piece of the OOI, the Regional Cabled Array: cables from Newport, Oregon, that bring high power and high-bandwidth internet to an observatory that spans the seafloor and water above. The equipment was built and installed by the UW starting in 2011 and became fully operational in 2016. It includes more than 140 instruments and six tethered robots laden with instruments that collect data from about 9,500 feet beneath the ocean’s surface to the near-surface environments. 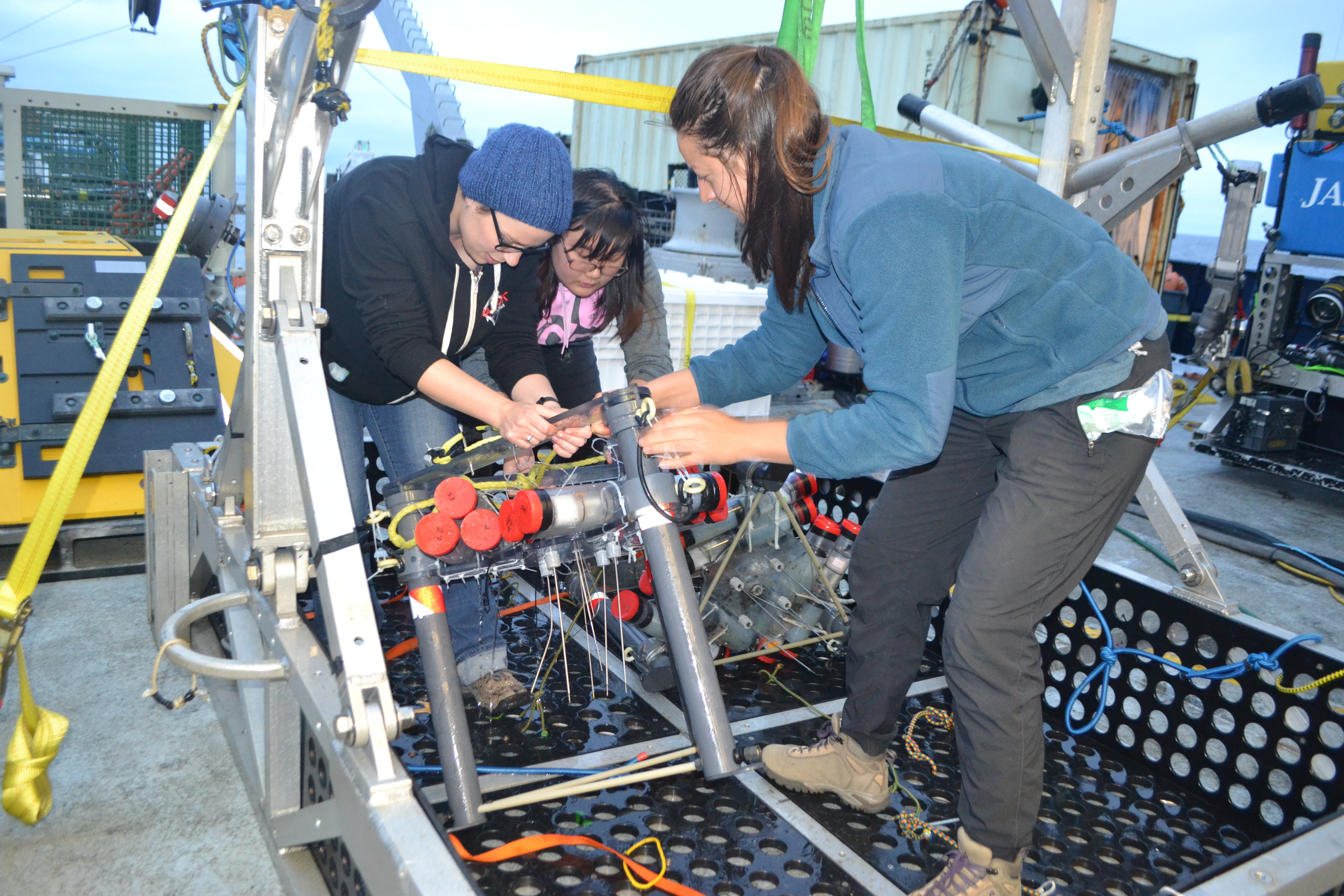 The new grant will fund refresh and maintenance of the Regional Cabled Array infrastructure, data evaluation, and five annual cruises. The main hardware will continue to be maintained and upgraded by the UW’s Applied Physics Laboratory, and will continue to incorporate sensors from local companies Sea-Bird Scientific of Bellevue and Paroscientific of Redmond.

Just before its official commissioning, the Regional Cabled Array in April 2015 captured first-of-its-kind data of an underwater volcanic eruption that included more than 8,000 earthquakes over a 24-hour period, a roughly 7-foot collapse of the seafloor and more than 30,000 explosive events. The data evolution of the eruption was the focus of several papers. One of those authors is now using real-time observations to predict that the underwater volcano’s next eruption, which also will be monitored, will occur in early 2022.

“At one of the meetings, an NSF officer said: ‘If you build it, they will come.’ That’s what we’re seeing,” said UW principal investigator and oceanography professor Deborah Kelley. “The real-time capability and power supply are key because they let us have a permanent, 24/7 presence on the seafloor and throughout the water column and we are now able to respond to events in near-real time. We have significant expansion capabilities and are excited to continue gathering fundamental measurements in the ocean.”

The number of instruments attached to the observatory is growing. William Wilcock, a UW professor of oceanography, has received two NSF grants that include funding for a new instrument now monitoring seismic activity and deformation of the seafloor, and another geophysical instrument to be installed next year on the underwater volcano, Axial Seamount. An award from Germany’s national research agency resulted in the installation this past summer of two high-resolution sonars to image methane gas plumes that are bubbling up from the seafloor at a highly active area called Southern Hydrate Ridge.

“We are looking at some of the most biologically productive and geologically active regions in the world, and we’ve never had so many co-registered sensors in these dynamic environments. With these data, collected on time scales from seconds to years, we hope to discover important links about how the ocean works and evolves,” Kelley said.

“We now have the capability to examine in real time the impacts of large storms and low-oxygen events on ocean biology and chemistry, offshore earthquakes and underwater eruptions, and to share these data and discoveries with a global community of users.”

Note: This article is adapted from a Woods Hole Oceanographic Institution press release.