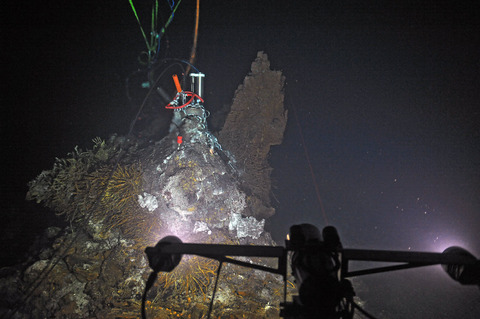 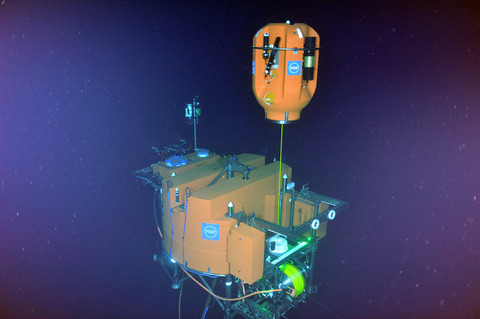 When the HMS Challenger set sail in 1872, researchers made discoveries that laid the foundation of the science of oceanography. Those early scientists couldn’t have imagined that more than a century later, the secrets of the sea could be discovered by almost anyone, even those thousands of miles from the coast.

Today, with the National Science Foundation-funded U.S. Ocean Observatories Initiative, the ocean is accessible 24 hours a day, seven days a week to anyone with an internet connection. The University of Washington led building and installation of the OOI’s Cabled Array, an underwater ocean observatory off the Pacific Northwest coast that is connected by fiber optic, high-power communication cables to the internet.

“About four out of five instruments on the Cabled Array are still streaming data live to shore, which is phenomenal for something that’s as technologically advanced and deployed in harsh ocean environments,” said Deborah Kelley, a UW professor of oceanography who now leads the UW portion of the project. “It’s an astounding piece of infrastructure.”

Every three hours roughly 250 miles off Newport, Oregon, and about 1 mile underwater, cameras and lights turn on at the Pacific Northwest’s Cabled Array. Live HD video of a 14-foot active hydrothermal vent streams at 2, 5, 8 and 11, both a.m. and p.m. and both Eastern and Pacific times, for a duration of 14 minutes.

This tech-heavy project creates a permanent, 24/7 scientific presence in Pacific coastal waters and the deep ocean, including on an underwater volcano 5,000 feet beneath the oceans’ surface. UW scientists and engineers built most of the hardware and installed it to transmit data live to shore for the next quarter of a century.

The Cabled Array is one of 83 platforms that make up the OOI and the only one directly connected to the internet. The full OOI includes more than 830 instruments providing more than 100,000 types of data. The platforms and instruments are spread across seven arrays, or hubs, in the Atlantic and Pacific oceans.

The centralized OOI Data Portal opened for the first time in January to allow users — scientists, educators and the public — to access the data for free. Since then, the quantity of data available and tools for downloading and plotting data have steadily increased, and the OOI continues to expand its data availability.

“The OOI is placing as much ocean data online as possible and making it available in real time,” said Roger Wakimoto, the NSF’s assistant director for geosciences in a statement. “In addition to scientific discovery, we hope to spark the public’s interest in the sea.”

Other currently available data sources for the Cabled Array include seismic data from the Incorporated Research Institutions for Seismology, a central hub for seismology data that has a data center in Seattle, and tilt and inflation data from the Axial Volcano displayed through a site from the National Oceanic and Atmospheric Administration. A UW research website on the 2015 eruption of Axial Volcano includes a high-resolution panorama of a 500 degrees Fahrenheit hot spring that lets viewers zoom in to explore individual deep-sea lifeforms.

Together, data from the OOI will help researchers gain a better understanding of earthquakes and shifts in undersea tectonic plates; learn about the unique lifeforms that thrive around deep-water hydrothermal vents; observe the methane-based ecosystems near gas-rich seeps on the seafloor; monitor the upwelling of nutrient-rich water that fuels productive coastal fisheries; and tease out links between ocean circulation, weather, and climate.

Scientists aren’t the only ones who will benefit. Educational materials, including data visualization exercises and lesson plans, will allow educators to engage students. Commercial or recreational fishermen can also monitor offshore conditions by checking data from nearby buoys.

“The complexity of myriad interacting oceanic processes and the fact that we all depend upon the ocean in many ways, demands that technologically innovative approaches be employed enabling persistent human telepresence to be projected into entire volumes of our oceanic ecosystems,” said John Delaney, a UW professor of oceanography who came up with the concept of the first tectonic-plate-scale cabled ocean observatory and led its design and installation.

UW students have already used observatory data in separate projects to track whale calls, investigate sounds related to the eruption of the underwater Axial Volcano and study plumes of methane bubbles where the coastal shelf slopes down to the deep ocean.

“I tell students: No matter what dataset you look at, you’re going to make discoveries,” Kelley said. “We’ve never had this kind of resolution before and availability to see significant events unfold as they happen — not just for a single instrument, but for multiple instruments in the same area, which means you can start looking at how things respond to environmental events.”

Several scientific publications related to the recent eruption of the Axial Volcano are in the works, and the team expects more research and educational collaborations to emerge. At the UW, the undergraduate ocean technology class is working to build a smaller, test observatory on the UW Oceanography dock in Seattle. Kelley and colleagues are helping local K-12 teachers and college students on Washington’s Olympic Peninsula to build their own ocean sensors and interpret the data that come back.

“It’s all part of building the pipeline of students who will apply a new way of learning about our oceans,” Kelley said. “This data is just a first taste of how so many scientific fields can benefit.”

Kelley will lead a maintenance cruise from July 11 to Aug. 14 to swap out instruments on the Cabled Array, polish off camera lenses, and bring some of the tethered robots in for annual maintenance.

The OOI is funded by the NSF, and construction and initial operations were overseen by the Consortium for Ocean Leadership. Partners include the UW, Oregon State University, the Woods Hole Oceanographic Institution, Rutgers University and Raytheon.

This was adapted from an NSF press release.