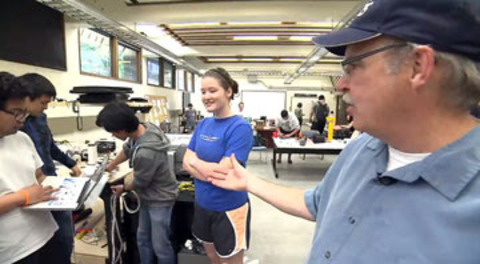 You can see the future of oceanography is remote instrumentation. It just makes so much sense for our students, the next generation of ocean scientists, to be knowledgeable about the technology.

Seawater and electronics don't typically make a good mix. But those were the two key ingredients for a University of Washington undergraduate course that had students build their own Internet-connected oceanographic sensors.

The students were getting their feet wet, literally, in a new type of oceanography that uses remote instruments to collect real-time data. During the final class May 31, seven instruments were lowered off the UW's oceanography dock, immersed in saltwater for the first time, and successfully sent their readings back to laptops on shore.

Earlier in the year guest lecturers introduced students to concepts such as how metal reacts with salt water, how to make rubber gaskets to prevent leaks, and even how to apply for permits to leave an instrument in the water long term.

It's the second year the course has been offered, and the first time that participating students tested their instruments in the water. The 22 undergraduates this year are mostly from oceanography, but also fisheries, mechanical engineering, electrical engineering and geology. Some came in with almost no background in electronics. All became more familiar with things like programming Arduino microcontrollers, measuring voltages and figuring out data rates.

"You can see the future of oceanography is remote instrumentation," Logsdon said. "It just makes so much sense for our students, the next generation of ocean scientists, to be knowledgeable about the technology. They need to know what's inside the black box."

Some students also will participate this summer in the cruise to install a National Science Foundation cabled deep-ocean observatory off the Pacific Northwest coast. This course prepares students to work on such systems, to deal with data streaming back to shore, and even to design new instruments that could connect to this type of infrastructure.

Students built sensors to measure light, oxygen and vibrations. Others designed ways to measure the firmness of the seafloor, a moving platform to hold a camera and other instruments, and a small robot to do subsurface inspections. The students also looked into how to store and display the data streaming back.

The plan is for future students to build their own mini cabled observatory, a permanent cable off the UW oceanography dock that will carry power and Internet to oceanographic sensors. That will let students collect real-time data about the urban waterway out their classroom windows.

"These students' future is data – lots of data," said Ginger Armbrust, director of the UW School of Oceanography, who stopped by to see the water test. "I guarantee that the best data these students have ever seen is the data they generate themselves."

Armbrust imagines that someday students could check on their instruments between classes, or conduct an oceanographic research cruise in Portage Bay by kayak. Having an observatory on campus could expose many more students to oceanographic fieldwork, and enable the types of multidisciplinary collaboration that will be the future of the field.

"A decade from now, we're going to have more data about Portage Bay than you would believe," said instructor Fritz Stahr, a UW oceanographer.

Other instructors were Rick Rupan, a UW oceanographer who also leads the UW underwater robotics team; Orest Kawka, a project scientist with the NSF-sponsored cabled observatory; Wendi Ruef, a research scientist in oceanography; and Ken Feldman, a UW ocean engineer.

You can see the future of oceanography is remote instrumentation. It just makes so much sense for our students, the next generation of ocean scientists, to be knowledgeable about the technology.

The Students, Faculty and Staff of the ERIS Cabled Observatory invite you to the 3rd annual "Throw Things Off the Dock" event.

The Olympic STEM Pathways Partnership is teaching educators how to build sensors, and use the information students collect to ask questions about short- and long-term patterns in the Salish Sea.

UWROV is a team of undergraduate students who specialize in the design, construction, and operation of remotely operated vehicles (ROVs).

A Reflection of ERIS

The ERIS Observatory is a student designed and student operated cabled observatory in Portage Bay. This quarter I had the privilege of being part of these talented and dedicated students. Here is my story...