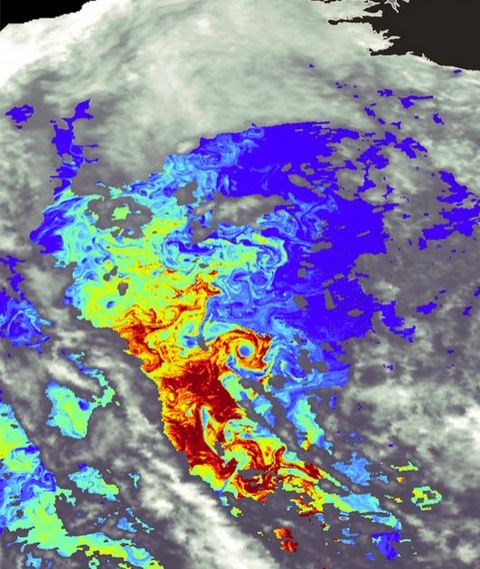 I was surprised at how important the eddies are to the bloom,” D’Asaro said. “They seem to play an important role in both initiating the bloom and in exporting its carbon.

Now UW-developed robots have captured what happens to these ocean blooms as they dissipate. Swirling ocean eddies carry microscopic plants far beneath the surface, creating a surprising end to the bloom that could have implications for fisheries and climate change.

The new study, led by the Woods Hole Oceanographic Institution, was published March 26 in the journal Science. Co-authors Eric D’Asaroand Craig Lee of the UW Applied Physics Laboratory and the UW School of Oceanography, designed the float and glider instruments, which track microscopic plants down as far as 1 kilometer (0.6 miles), where satellite images can no longer see.

Half of the photosynthesis on our planet occurs in the oceans, converting much of the climate-warming atmospheric carbon dioxide into plant-based carbon. All of this growth happens near the surface, where there is sunlight. Current global climate models simulate the spring bloom by calculating how sunlight warms the surface ocean, leading to a simple bloom trapped in the sunlit surface layer.

D’Asaro was corresponding author of a 2012 study in Science that showed how swirling eddies can move up the start of the bloom by two to three weeks.

The new paper shows that the same eddies are also important in moving the plant-based carbon away from the surface, thus preventing that carbon from being transferred back to the atmosphere.

“I was surprised at how important the eddies are to the bloom,” D’Asaro said. “They seem to play an important role in both initiating the bloom and in exporting its carbon.”

It was thought that the decaying plant matter just slowly sank through the water. Instead, the UW-built robots detected ocean whirlpools sending tendrils of nutrient-rich water shooting into the deeper sea.

These whirlpools and surrounding filaments are not included in current climate models, but the authors say they can contribute as much as half of the total springtime export of carbon from the very productive North Atlantic Ocean, where plant growth helps support the base of the marine food web.

The findings are also relevant for climate change. The North Atlantic region alone is responsible for about one-fifth of the oceans’ removal of human-generated carbon dioxide from the air, as carbon-based marine plants grow at the surface that then sink to depths where the carbon will not be released to the atmosphere for years to come. Understanding when and how this happens could help predict how carbon dioxide and other factors will change in future years.

I was surprised at how important the eddies are to the bloom,” D’Asaro said. “They seem to play an important role in both initiating the bloom and in exporting its carbon.