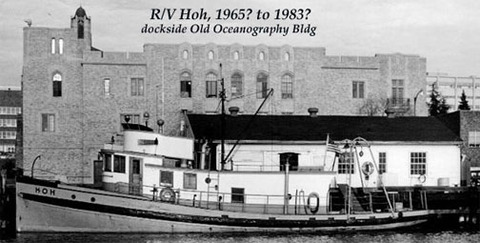 The "Old" Oceanography Building was designed and built in 1931 using Rockefeller Funds.  At that time, interest in the oceans centered on the chemistry of seawater and marine biology.  Service shafts came up the center of the building and into the labs providing power, water (including seawater), gas and drains.  Special small balance rooms with floors isolated from the main building structure in order to minimize vibration were built for the chemists that worked in quantitative analysis and needed precise triple beam balances.  The seawater system was a marvel.  Its black rubber piping prevented toxic ions from leaking into the water and harming the marine life that were kept in large aquaria on the third floor.  Sea water was hauled in by barge and pumped from the barge to a large underground storage chamber under Room 101 at the east end of the building.  The seawater was pumped up to a small tower that was on the southwest corner of the roof above the freight elevator and here a large refrigeration unit cooled the water.  The seawater then flowed by gravity through the piping system and aquariums back down through a large filtering system composed of wooden trays of sand;  these were located on the first floor at the east end of the building.

-- Alan Duxbury, from an essay titled "Some Thoughts on the Early Days of the Department of Oceanography at the University of Washington"