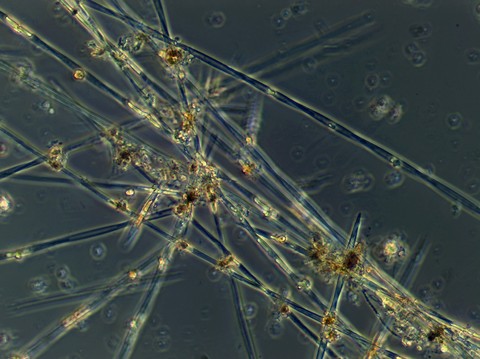 Such observations are critical to understanding what new elements in the coastal ocean produced such a massive toxic bloom this year, and whether we should expect these conditions to continue," B. Hickey.

UW research analyst Anthony Odell left June 15 from Newport, Oregon, aboard the National Oceanic and Atmospheric Agency's research vessel Bell M. Shimada. He is part of a NOAA-led team of harmful algae experts who are surveying the extent of the patch and searching for "hot spots" —  swirling eddies where previous research from the UW and NOAA shows the algae can grow and become toxic to marine animals and humans.

"The current bloom of Pseudo-nitzschia spp., the diatom responsible for domoic acid and amnesic shellfish poisoning, appears to be the biggest spatially we have ever observed," Odell said. "It has also lasted for an incredibly long time —  months, instead of the usual week or two."

Odell is the coastal sampling coordinator at the UW's Olympic Natural Resources Center in Forks, Washington, part of the UW College of the Environment. From his base in Hoquiam, Odell samples shellfish, phytoplankton and water quality, and responds to toxic algae bloom events along Washington's outer coast.

Now he is doing toxin sampling on the three-week first leg of the NOAA voyage, from San Diego to San Francisco. Three more legs will continue through mid-September, surveying up to the north end of Vancouver Island.

The first samples collected from near San Diego were fairly clean, Odell said, suggesting they were still south of the patch. More recent samples collected this week from near Santa Barbara showed the first signs of the harmful algae. The massive bloom is known to extend at least from central California to Vancouver Island, with reports coming from as far north as Alaska.

As the ship travels north it is making a large back-and-forth grid, sampling the water from very near shore to several miles offshore. NOAA scientists initially scheduled the cruise to survey sardine and hake. Researchers from the UW, NOAA and other partners were invited to join and use the opportunity to conduct a large-scale sampling for marine toxins.

The bloom includes some of the highest toxin levels ever recorded in Monterey Bay, California, and along the central Oregon coast. All of Washington's razor clamming beaches are currently closed, and the southern coast of Washington has the largest-ever closure of our state's Dungeness crab fishery.

For the past 12 years, Odell has been a research analyst for the UW-led Olympic Region Harmful Algal Bloom Partnership. The organization provides critical monitoring data and other information about toxic algae blooms to coastal communities on Washington's Olympic Peninsula.

The UW also is involved in a similar monitoring effort for Puget Sound, SoundToxins, which includes sampling at the UW's Friday Harbor Laboratories.

The massive bloom that emerged this spring comes after a few relatively quiet years. While the phenomenon is natural and cannot be prevented, better knowledge could help to predict and prepare for its effects.

In recent years, UW oceanographers Barbara Hickey and Ryan McCabe sampled coastal waters to help identify the origin of toxicPseudo-nitzschia cells on the Washington and Oregon coasts. The studies resulted in the development of computer models that can simulate how the blooms travel. The researchers have requested emergency-response funds from NOAA's coastal management group to enhance offshore sampling and describe the environmental conditions promoting and sustaining the present bloom.

Computer-based forecasts rely on observations from onshore sampling efforts and offshore buoys. A regional ocean-observing data portalled by Jan Newton, an oceanographer at the UW Applied Physics Laboratory, combines water observations from federal, state and other agencies and provides that information and some forecasts to users in real time.

"Such observations are critical to understanding what new elements in the coastal ocean produced such a massive toxic bloom this year, and whether we should expect these conditions to continue," Hickey said.

The main culprit for the current toxicity is Pseudo-nitzschia, a tiny algae that under certain conditions releases an acid that acts as a neurotoxin. On campus, UW oceanographers are using genetic tools to better understand these microscopic creatures and learn how theyrespond to changing conditions.

What caused the current bloom remains a mystery. Nick Bond, a research meteorologist at the UW Joint Institute for the Study of the Atmosphere and Ocean, coined the term "the blob" for the current huge patch of unusually warm water off the West Coast, and has studied its origins. Whether warm water is connected to the algal bloom is unknown.

"Our goal is to try to put this story together once we have data from the cruises," Vera Trainer, a NOAA scientist and UW affiliate professor of aquatic and fisheries sciences, told the Seattle Times. She manages the Harmful Algal Blooms Program  at NOAA's Northwest Fisheries Science Center and is overseeing the current sampling effort.

For more information, contact Odell at odellamo@uw.edu. He is at sea until July 5 with limited Internet connection.

See also the NOAA press release about this summer's monitoring cruise, and a list of UW experts on harmful algal blooms.

Such observations are critical to understanding what new elements in the coastal ocean produced such a massive toxic bloom this year, and whether we should expect these conditions to continue," B. Hickey.

This year, jellyfish are on track to break all known records. In June, one sampling found them 24 times more abundant than usual.

Invisible Helpers of the sea