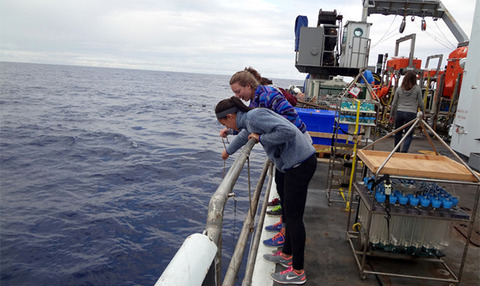 It is a little intimidating, but it’s often the nerve-wracking experiences that turn out to be the most memorable ones. Khadijah Homolka

When an underwater volcano erupted in April off the Oregon coast, researchers knew within minutes that something spectacular was happening more than 300 miles offshore. Precision hardware installed by the University of Washington last summer let scientists see its effects almost instantly from shore.­­

A team of researchers, engineers and students is now at sea t­o maintain that equipment and assess the volcano’s aftermath. The cruise — from July 4 to Aug. 7 aboard the UW’s Thomas G. Thompson research vessel — is the first trip to the site since the eruption. The seafloor laboratory, where a cable brings power and the Internet to waters off the Pacific Northwest coast, provides a real-time, virtual eye on the deep sea. It’s part of the National Science Foundation’s

In the lead-up to this summer’s expedition, a film crew visited the UW team in early June to hear about the project:

The cruise now under way includes 18 undergraduates from the UW, Bellingham’s Western Washington University and Aberdeen’s Grays Harbor College. Majors include oceanography, fisheries, engineering and Earth sciences. The students are working around the clock to help a specialized  swap out sensors and platforms for annual maintenance and help scientists and engineers check in on other instruments, which include a high-definition video camera and deep-sea water and DNA sampler. They also will undertake their own self-directed science and outreach projects that will continue through the fall.

The group is posting daily news updates on the cruise website, which includes photos and student blog posts. You can also follow live updates on Twitter at @OceanObserving.

Last summer, in an 83-day marathon effort led by UW oceanography professor John Delaney, the team successfully installed the last of the hardware for the more than 100 networked instruments. This year is the first annual cruise to maintain the observatory, which will continue to gather data about climate change, marine chemistry, deep-sea life and seismic activity for a quarter of a century.

“The cabled observatory allows us to put equipment from high-tech labs at the bottom of the ocean,” saidDeborah Kelley, a UW professor of oceanography who is at sea for the cruise. “It really gives us eyes that we’ve never had before.”

The cruise has been going well, she said, thanks to the work of the team at sea and on shore, and the energy and enthusiasm of the students.

Khadijah Homolka, a UW Earth and space sciences student who participated in the first of the three legs,wrote from the ship in July about getting used to the ship’s motion, mistakenly sitting in the captain’s chair, working on marine science instruments and getting ready for her 4 a.m. shift logging the operations of the deep-sea robot.

"It is a little intimidating, but it’s often the nerve-wracking experiences that turn out to be the most memorable ones,” Homolka wrote. “I’m currently in the open ocean, an incredibly hostile and fickle environment, so why not try something a little scary?”

This summer’s work includes swapping out three refrigerator-sized “science pods” designed and built at the UW Applied Physics Laboratory. These 200-pound pods require annual maintenance to let them zoom up and down through 600 feet of water collecting data nonstop. The team will also install three deep-ocean profilers to patrol the deeper depths.

The full 35-day itinerary includes checking each of the Cabled Array study sites. These range from an active underwater volcano and scalding-hot vents to seafloor deposits leaking methane gases closer to shore, and a site where the shallower coastal ocean drops off into the open sea. The ship will come ashore in Oregon briefly July 19-20 to swap crews and load new equipment.

Meanwhile, other team members are watching from the UW campus. The ship lowers the tethered robot down nearly two miles beneath the ocean’s surface to plug in equipment. As soon as that equipment connects to the cable, it’s online and data flows at the speed of light to land. The onshore team runs installation and checks to make any adjustments before the robot’s work is complete.

So far, preliminary data is available on the seismic activity, pressure and seafloor movement at the volcanic site. The interface that will publicly display all the data streaming in from the observatory is nearing completion and is scheduled to launch by the end of the year.

For more information, contact Kelley at dskelley@uw.edu and Delaney at jdelaney@uw.edu. Kelley will be at sea with intermittent email access until Aug. 7. Read previous UW Today articles about the project here.

It is a little intimidating, but it’s often the nerve-wracking experiences that turn out to be the most memorable ones. Khadijah Homolka

Each year, as many as 45 students work and study alongside UW researchers and crew to learn all aspects of seagoing research, ship ops, and life aboard a research vessel.