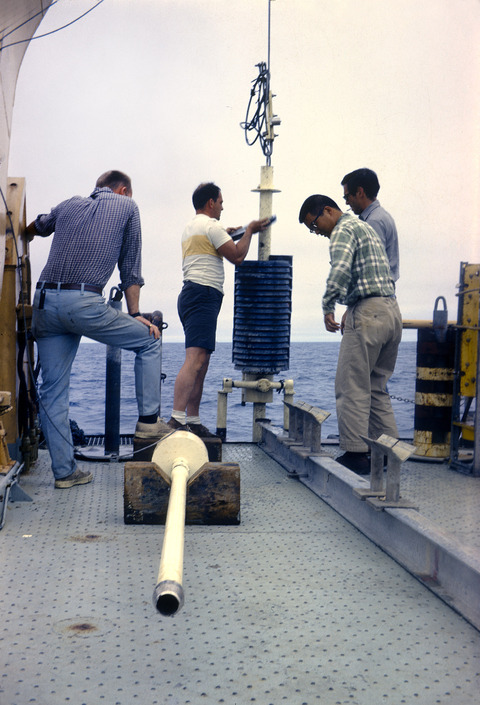 "Usually you think the data will be used once in a paper, and people will refer to it for four or five years, but you don't expect it to be resurrected after 45 years." Bobb Carson 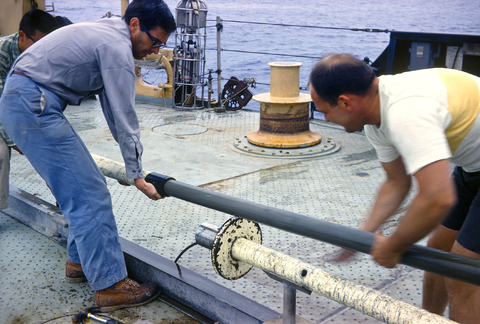 Publish with images in UW_today

Nearly forgotten research from decades ago questions a widely used method for estimating Pacific Northwest earthquake hazards. Sand and mud collected as part of University of Washington oceanographers' graduate work in the late 1960s is central to a scientific story that spans human and geologic timescales.

A new paper, to be published in the September issue of Geology, may shake the research community's confidence in what the sediment record can say about past earthquakes. The lead author is Brian Atwater, a UW affiliate professor of Earth and space sciences and a geologist with the U.S. Geological Survey.

The report focuses on the Cascadia subduction zone — a giant active submarine fault that slants eastward beneath the Pacific coast of southern British Columbia, Washington, Oregon and northern California. Studies in the past three decades have provided increasingly specific estimates of Cascadia earthquake sizes and repeat times, which affect public safety through seismic provisions in building design and tsunami limits on evacuation maps.

At issue is not whether the Cascadia subduction zone produces enormous earthquakes, Atwater said. What the report asks instead is how much geologists can say, with confidence, about the history of those earthquakes going back thousands of years.

Sediment cores collected over the past two decades near the foot of the continental slope, about 100 miles off Washington's coast and on seafloor sloping to nearly two miles deep, are among a broader set of cores that underpin influential estimates of Cascadia earthquake size and recurrence published in 2012.

The new report questions the geologic basis for these estimates, not by collecting newer samples, but by looking at a larger suite of cores collected and first analyzed in the 1960s and 1970s. Authors visited the UW Libraries and dusted off oceanography doctoral dissertations submitted more than four decades ago.

The new study draws on sediment core log notes handwritten by co-author Bobb Carson ('71), and another UW alumnus, William Barnard ('73), during research cruises off the Washington coast. Both were graduate students with Dean McManus, a UW emeritus professor of oceanography. Other samples were collected by co-author Gary Griggs, then a graduate student at Oregon State University and now a scientist at the University of California, Santa Cruz.

Those Nixon-era sediment cores were originally collected for research unrelated to earthquakes. The scientists were interested in tracing turbidites – beds of sand and mud laid down by bottom-hugging, sediment-driven currents that infrequently emerged from submarine canyons onto the deep ocean floor. Not until a 1990 report by a Canadian government geologist would turbidites be reinterpreted as clues to Cascadia earthquake history.

The new study asks how well geologists have managed to read that evidence. Images of the marine sediment layers collected in 2012 by co-authors Paul Johnson, a UW professor of oceanography, and current UW oceanography graduate student Marie Salmi suggest that in some of the deep-sea canyons along the Washington coast, shaking would not send the sediment flowing as the current models predict.

The historical samples confirmed that this can happen.

"Few earthquakes managed to register at Bobb [Carson]'s core sites offshore of northern Washington," Atwater said. "For seismology it would be great if earthquakes and turbidites were to correspond one for one. But Bobb's geology makes clear that it's not nearly that simple."

Carson said he was surprised to be contacted about his UW doctoral work.

"Wouldn't anyone be?" said Carson, who went on to become a professor and dean before retiring from Pennsylvania's Lehigh University. "Usually you think the data will be used once in a paper, and people will refer to it for four or five years, but you don't expect it to be resurrected after 45 years."

"Usually you think the data will be used once in a paper, and people will refer to it for four or five years, but you don't expect it to be resurrected after 45 years." Bobb Carson

About 200 miles off the Oregon coast, a ship out of Portland dredged up an inch-thick cable from the depths of the Pacific Ocean. Workers wired the cable to what is essentially a mammoth yellow electrical outlet and lowered it back into the sea.

Not all earthquakes are equal. There are the long-lasting, magnitude 5-6 earthquakes that occur regularly beneath the Puget Sound