UW scientists engage the next generation of oceanographers through STEM partnership 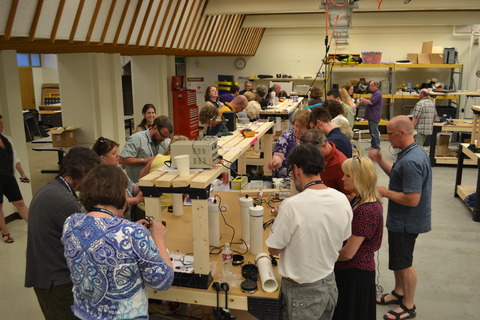 Within a few years, we hope more than 100 sensors will be installed in Puget Sound and adjacent coastal waters,” Deborah Kelley

For nearly 40 Washington State teachers attending the Olympic STEM Pathways Partnership workshop at the University of Washington in late-June, it was like Christmas had come early. Each educator sifted through a toolkit full of techy gadgets—a breadboard, ribbon cables, wires, antennas, and a microprocessor. The teachers used their cache of materials to assemble a powerful, data-collecting underwater sensor; and over the next several years, they’ll develop an approach to bring their new expertise back into the classroom.

Spearheaded by the School of Oceanography’s Deborah Kelley and Daniel Grunbaum, and a continuation of their work with the Clallam Bay School and Chief Kitsap Academy, the Olympic STEM Pathways Partnership is teaching educators how to build sensors, create opportunities for collaborative sensor building in their classrooms, and use the information students collect to ask questions about short- and long-term patterns in the Salish Sea.

And the students won’t just earn cool points with the data they help collect—by learning how to build and deploy sensors, they’ll be contributing to science from day one. Their instruments will feed data into a public website, created by Wallingford Imaging Systems’ Chris MacGregor, that will allow students and the community to investigate the changing environmental conditions across Washington.

“Within a few years, we hope more than 100 sensors will be installed in Puget Sound and adjacent coastal waters,” Kelley said. “These teachers and their students are on the ground floor of this incredible project that could change the way we interact with, monitor, and understand our waters. We’re seeing unprecedented environmental change off of our coast, and temperature in the marine system is a fundamental driver.”

In the nearer term, students can do things like assist the state’s oyster growers. Effective this spring, growers are required to monitor air and water temperatures when they harvest to help control Vibrio, a naturally occurring bacterium that can cause illness in humans. The problem is that most oyster farms don’t have the tools to comply with this new regulation.

“Part of our dream would be that students in coastal communities could get internships with oyster growers, maintain their sensors, and analyze the data for them,” Kelley said. “They would begin to understand the environment they live in in a much more powerful way.”

Speaking about his experience at Chief Kitsap Academy in Poulsbo, Wash., Grunbaum says that students were engaged and excited throughout the process. While building sensors, some things worked and others didn’t—that’s representative of engineering in general, he said. Grunbaum believes that this project will see similar success as it’s scaled up and replicated across the state.

The first of its kind, the program will take this hands-on approach into schools to inspire the next generation of leaders in science, technology, engineering, and math. Once they understand the ins-and-outs of their sensors and the data they can track, the teachers’ toolkits can be expanded on to create multiple environmental sensors for use in their classrooms and beyond. In addition, each participating teacher has committed to mentoring three other educators from his or her home institution. Part of a three-year award funded by a grant from the State, this partnership brings together scientists from the College of the Environment, elementary through high school teachers from 18 school districts across western Washington, Olympic College, and is being organized with the help of UW alum and Director of STEM Programs and Outreach at the Olympic Education Service District 114 Kareen Borders.

Within a few years, we hope more than 100 sensors will be installed in Puget Sound and adjacent coastal waters,” Deborah Kelley