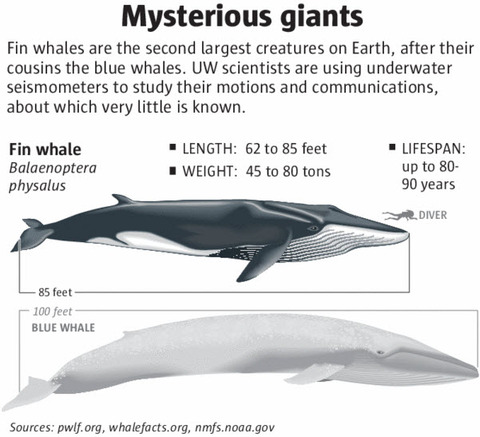 At first, the whale chatter was just a nuisance.

When Seattle scientists set out to monitor earthquakes off the Northwest coast, they expected their underwater seismometers to occasionally pick up the booming voice of the fin whale — the second-largest creature on Earth. But what they wound up with was such a cacophony that they had trouble zeroing in on the actual tremors.

“It was a very big pain,” said William Wilcock, a marine geophysicist at the University of Washington.

To separate tens of thousands of small quakes from hundreds of thousands of whale calls, he and his students were forced to write their own automated program. Now, they’re mining that mountain of discarded data for insights into one of the sea’s least-known and most endangered giants.

Second only to blue whales in size, fin whales remain shrouded in mystery because they’re so challenging to study. Nobody knows where they give birth or even why they sing.

“When I started this project, I was really surprised by how little is actually known about them,” said doctoral student Michelle Weirathmueller. With seafloor seismic monitoring on the rise, her goal is to fill in some of those gaps.

“The thing that’s neat about this is that we are basically piggybacking on experiments that were designed for something completely different,” she said.

Already, the UW team has discovered that some fin whales migrate north in the fall — a time when biologists assumed most of the whales would be headed south to breed.