Seagrass in Australia help students prepare for the real world 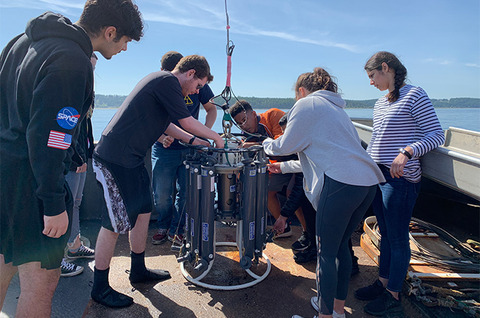 UW College of the Environment

In the real world, engineers and scientists work together to conduct research and solve problems, but that is typically not the case in classrooms. But a month-long study abroad program provided an opportunity for student scientists and engineers to collaborate. University of Washington students traveled to the Queensland University of Technology in Australia, where they studied why seagrass and coral reef ecosystems are important, how to measure changes within these ecosystems and how to use robots to collect data.

Thirteen students were selected to participate in the program after an interview process that was carefully designed to create a diverse cohort. The class was co-taught by School of Oceanography research engineer Rick Rupan and graduate student Isaiah Bolden, who formed an engineer/scientist team to expose students to real-world problem-solving and promote diversity of thought. The two led by example, showing students how engineering and science can work together to solve problems.

“We wanted to push for a place-based learning experience, where students would have opportunities to interact with cutting edge instrumentation and technology to research ecological changes as they relate to local historical and cultural factors,” said Bolden.

Before the students even set foot on the plane, they spent a rigorous 24 hours conducting field research at Friday Harbor Laboratories where they quite literally got their feet wet. The students—many of whom have never been on a boat prior to boarding Friday Harbor Labs’ R/V Centennial—learned how to operate and collect data from an instrument known as a CTD, which measures the conductivity, temperature and depth of seawater. Students also learned about processes governing the cycling of key seawater components, like carbon, oxygen, salinity and acidity within coastal wetland ecosystems.

Armed with this baseline knowledge, the students began the actual study abroad program in Australia on June 24, 2019. June Hairston from UW Louis Stokes STEM Pathways and Research Alliance: Pacific Northwest (LSAMP) gave lectures on diversity and cultural representatives from the local aboriginal communities provided students with context of the history and customs of the land they were visiting. After a week of biogeochemical classes focused on coastal seagrass and coral reef ecosystems, students formed groups and created scientific hypotheses to test in the field. The students traveled east to the Moreton Bay Research Station on Stradbroke Island and used new field sampling techniques along with Autonomous Underwater Vehicles (AUV) to collect scientific and engineering data.

Based on research interest, four teams were formed. Using manually-controlled devices and satellite imagery, the first group looked at seagrass density as a measure for the health of certain patches of seagrass. Seagrass can sequester carbon to offset ocean acidification, but many seagrasses are dying off. Results showed that autonomous monitoring of seagrass borders at shallow depths is possible, and the group is now working on a proposal to obtain a more autonomous kind of AUV to monitor and map seagrass beds, coral reefs and other underwater ecosystems. This would effectively eliminate the need for manual ways of collecting data, like manually-maneuvered devices.

The fourth group looked at the parameters that influence coral health at Moreton Bay versus neighboring Lady Elliot Island in the Great Barrier Reef. Using four collection methods, the students collected seawater acidity, temperature and salinity, and coral diversity and coverage. Results show that Lady Elliot corals are healthier and more diverse than those at Moreton Bay. The group concluded that understanding the correlation between carbonate saturation state and coral health could help preserve coral ecosystems.

Together, Rupan and Bolden modeled how science and engineering can work together. “The goal was to do things we never even thought to do before,” said Rupan. “That type of diversity is something we don’t get in our classrooms, but is necessary today more than ever.”

The class, titled Discrete, Autonomous, and Robotic Observations of Marine Ecosystems in Australia was funded jointly from the College of the Environment’s Diversity, Equity and Inclusion team, UW’s LSAMP program, and the College of Engineering. Final group presentations are scheduled for Tues., Nov. 5 at 3 p.m. in room 425 of the Ocean Sciences Building. 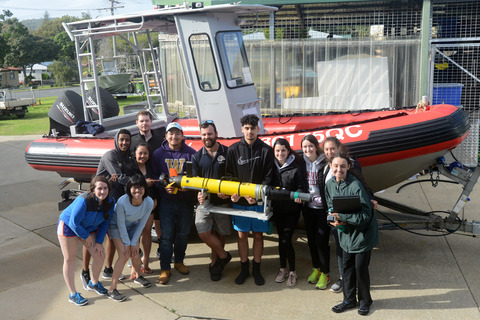