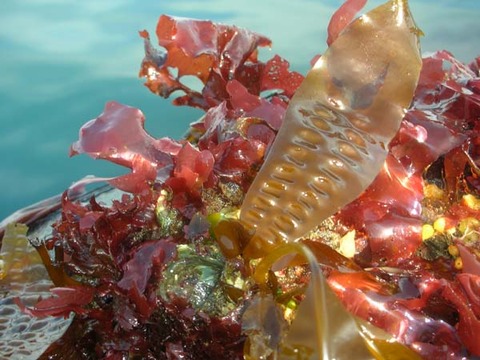 This project will explore the use of native vegetation to help manage the effects of ocean acidification in Puget Sound. Terrie Klinger

The University of Washington will be working with the Bainbridge Island-based Puget Sound Restoration Fund to see whether growing seaweed could help combat ocean acidification in Puget Sound waters.

Like plants on land, kelps and other seaweeds naturally take up carbon dioxide. Puget Sound waters are already high in carbon dioxide and are projected to become more so in the future. Seaweeds, which are naturally abundant in Puget Sound, could help address this growing problem. The team proposes to cultivate seaweed at a demonstration site in north Hood Canal, assess the project’s effect on the acidity of nearby water, and harvest the resulting crop to test marketable products such as plant fertilizer, food and biofuels.

A $1.5 million grant from the Paul G. Allen Family Foundation announced in April will kick-start a five-year demonstration project.

Partners at the UW and the Seattle-based NOAA Pacific Marine Environmental Laboratory will assess the impact of seaweed cultivation on the surrounding water’s chemistry.

“Many people have wondered if the uptake of carbon dioxide by seaweed can realistically be used to offset corrosive conditions in a natural setting,” said project member Jan Newton, an oceanographer at the UW Applied Physics Laboratory. “It’s exciting to be able to test that locally here in Puget Sound.”

The Restoration Fund will propagate seaweed at its shellfish hatchery, located at NOAA’s Manchester Research Station, and seed it onto twine that will be out-planted at the demonstration site. The project initially plans to grow sugar kelp and possibly bull kelp in the water off Hood Head, on Washington’s Olympic Peninsula just north of the Hood Canal Bridge.

Newton and John Mickett, an oceanographer at the Applied Physics Laboratory, will work with NOAA scientists to lead the chemical studies. UW and NOAA researchers will install two buoys with instruments inside the area, and then will work with the Washington  Department of Natural Resources to place about 10 more water sensors in different locations to better gauge the extent of any changes.

Project member Nina Bednaršek, a postdoctoral researcher in the UW’s School of Marine and Environmental Affairs, will use sea butterflies, or pteropod plankton, to look for any changes in the animals’ ability to form a protective shell.

“This project will explore the use of native vegetation to help manage the effects of ocean acidification in Puget Sound,” said Terrie Klinger, a UW professor of marine and environmental affairs. “It’s exciting to see a project of this scale launched to address a regional problem.”

Newton and Klinger direct the UW-based Washington Ocean Acidification Center. The center regularly conducts monitoring cruises throughout Puget Sound. For this project they will carry out cruises with researchers and students to monitor water all around the seaweed cultivation site.

“Periodically we will use ship surveys to increase the spatial coverage of our assessment. However, surveys have less temporal coverage than moored instruments, which work day and night continuously,” Newton said. “Together these will give us the spatial and temporal coverage necessary to assess the impact of seaweed cultivation on water properties.”

The project, titled “Cultivating Seaweeds in Puget Sound to Protect Shellfish and Other Sensitive Species from Ocean Acidification,” is led by Betsy Peabody and Joth Davis at the Puget Sound Restoration Fund. The proposal was among six finalists chosen for the Allen Foundation’s Ocean Challenge, seeking ideas that would reduce the impact of ocean acidification.

NOAA scientists Richard Feely and Simone Alin, both UW affiliate faculty members in oceanography, are among the other partners.

“This is a powerful team of collaborators coming together around a timely issue,” Newton said.

This project will explore the use of native vegetation to help manage the effects of ocean acidification in Puget Sound. Terrie Klinger