Seeing the light at the Elwha Delta

Teaming up with students to measure sediment impacts after dam removal 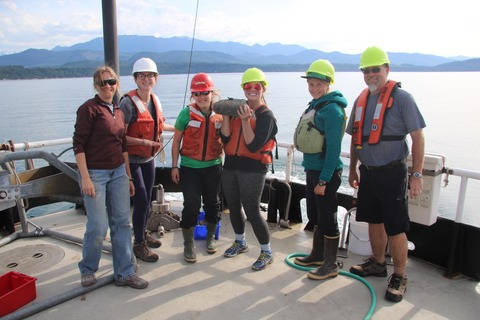 On a warm, sunny day nearly two years after dam removal was completed on the Elwha River, the surface plume offshore of the river is looking quite “clean.” This shouldn’t be surprising, as ~60% of the sediment impounded by former hydroelectric dams has left the reservoirs (Ritchie et al., 2015). However, during rainstorms, river turbidity still exceeds 1000 FNU (USGS Water Data, gauge 12046260), and below the surface of the Strait of Juan de Fuca, major habitat changes are underway.

PIs Andrea Ogston (UW), Ian Miller (WA Sea Grant), and Nancy Elder (USGS) and graduate student Emily Eidam (UW) are working on a WA Sea Grant project to investigate the interplay between suspended sediment and light available to organisms (e.g., kelp and eelgrass), and to monitor sedimentary changes to seabed habitats. This work is being done in close collaboration with Helen Berry (DNR), Steve Rubin (USGS), and Melissa Foley (USGS), ecologists who are surveying the macro- and meiofauna of the Elwha estuary and subtidal habitats to better understand how the system is rebounding, and what the “new normal” will be as mean sediment loads decrease.

The first task was deploying an array of seven light sensor systems, a key component of this project. These systems include HOBO light, Odyssey PAR (photosynthetically active radiation), temperature, and pressure sensors to allow for continuous measurements of light reaching seafloor habitats for about two weeks, or until algae cover them! These mounts will be re-deployed several times per year to capture light availability in different growing seasons.

Recovering, refurbishing, and re-deploying an instrumented tripod was the next major team effort, and the platform is now back in Freshwater Bay measuring sediment transport. Then, on to box coring!! More than 40 cm of new mud and sand has deposited in Freshwater Bay since the start of dam removal, and x-radiographs of core slices show a complex history of active sediment deposition and erosion, and the influx of a few species of benthos. Students spent two afternoons practicing their slicing skills in the sunshine.

Dr. Ian Miller (WA Sea Grant) prepares to deploy a set of light sensors offshore of the bluffs east of the river. These 2-week deployments will be repeated several times per year to study light conditions given changing seasons and river discharge. (Photo by Jenny Renee)

As part of outreach efforts related to the project, Jeff Ryan from OESD114 joined the final day of the survey to collect media about the Elwha. Videos and photos will be incorporated into science units for use in Olympic Peninsula K12 classrooms, in an effort to help local students learn about regional systems.

In October, researchers will return to the Elwha for another survey from the R/V Barnes, but this time in concert with the Marine Sedimentary Processes apprenticeship from FHL. The apprenticeship focuses on coastal impacts of the Elwha restoration project, and the cruise provides students an opportunity to collect samples for their own individual research projects – both from the vessel and on shore – and to learn about oceanographic field methods first-hand. Field time is always a highlight of the course!

The diverse participants in this month’s cruise represent a cross-section of the more than 50 graduate, undergraduate, and high school students and a multitude of scientists who have contributed the UW portion of this project through volunteering on cruises, collaborating at meetings, and sharing datasets. One of the best parts of working on the Elwha, in our Salish Sea backyard, is the community aspect of the restoration effort and the science that surrounds it. As the system continues to rebound and re-adapt to a new equilibrium, we’re excited to follow the changes and learn more about ecosystem responses to natural and anthropogenic perturbations.

Many thanks to Capt. Todd Schwartz, Capt. Ray McQuin, and Chief Mate Ken Pinnel for their assistance with the R/V Barnes cruise.