Seniors on the Kuroshio Extension

This region of the ocean is one of intense atmosphere-ocean exchange of CO2, the main atmospheric greenhouse gas 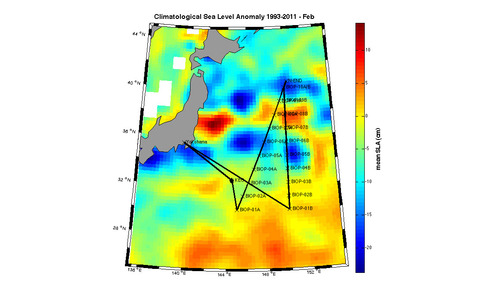 This winter eleven senior undergraduate students will be fulfilling the capstone course required for graduation from the School of Oceanography at the University of Washington by joining an ocean cruise to study the mechanisms controlling the uptake of atmospheric carbon dioxide (CO2) in the Kuroshio Extension of the Northwest Pacific Ocean off Japan. The R. V. Melville under the leadership of Chief Scientists Steven Emerson and Stephen Riser will leave Yokohama on February 25, travel southeast for about 500 miles, turn northeast and cross the Kuroshio Current and then return after about three weeks at sea. This region of the ocean is one of intense atmosphere-ocean exchange of CO2, the main atmospheric greenhouse gas. The research goal is to determine the role of biological processes in decreasing the CO2 in the water so that models can more accurately predict the effects of increasing anthropogenic CO2 in altering climate.

Oceanographers on this cruise will study the role of biological processes in transferring CO2 from the atmosphere to the ocean by measuring the concentrations of carbonate chemistry and oxygen in the water. Since oxygen is produced during photosynthesis and CO2 is consumed, the U. W. scientists and students will determine the role of biological processes by deploying eighteen profiling floats with especially-calibrated oxygen sensors while making measurements on the ship of dissolved and particulate carbon constituents. The profiling floats drift with the currents, but change their buoyancy so that they make a profile to 2000 meters every 10 days over a period of about 5 years. Data are sent to the U.W. labs via satellite communication, and the floats sink to the ocean bottom after their batteries are drained.

The oceanography projects of the undergraduate students on this cruise must be more immediate than ones that would describe an annual cycle because they must be interpreted and described in spring quarter of this year as part of their capstone projects. Student projects range from measuring water circulation in this complicated ocean current, to measurements of pH and other carbonate system properties, to studying the relationship between satellite color and measured abundances of phytoplankton and bacteria.

For more details of their projects and to follow the cruise progress see: http://courses.washington.edu/ocean444/2013b/

This region of the ocean is one of intense atmosphere-ocean exchange of CO2, the main atmospheric greenhouse gas