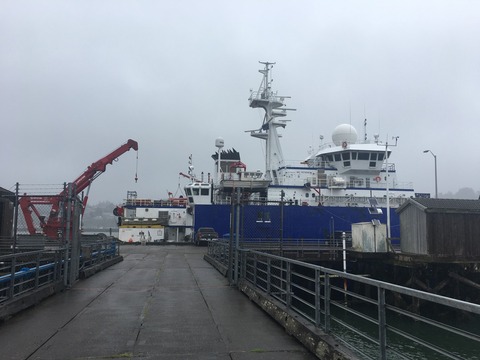 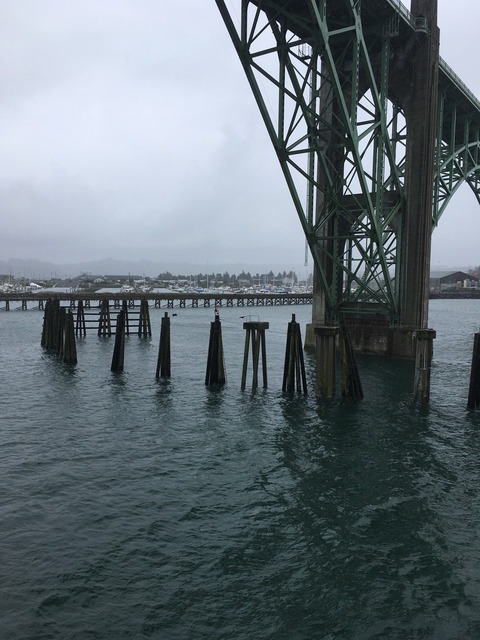 After a five and a half hour drive from Seattle, we arrived in Newport, Oregon a little before 1 in the afternoon. Or should I say 1300 since we’re on a boat now? The distant land of Newport, Oregon gave us a very Seattle welcome with a greeting of strong winds and rain. We passed up on the many attractions that Newport has to offer such as the wax museum or the Ripley’s Believe it or Not (and the list ends there) in order to arrive at the Sikuliaq to drop off our stuff.

We made several discoveries upon arrival at the Sikuliaq. Firstly, that we were all saying the name of the ship wrong and each in our own misconstrued variation.  Secondly, we were all amazed by the immensity of the ship and the many amenities present on it. We spent the rest of the day getting oriented with the ship and doing homework in preparation for deployment the following day.

The real excitement of the day began with a safety orientation. There was a tie for the greatest highlight of the orientation between hearing about what not to flush in the head for the fourth time or rolling on the floor of the main lab trying to squeeze on an exposure suit. I’m going to make an executive decision and say the exposure suit experience takes the cake. We all looked like a Hazmat team in our bright orange apparel.

We were then able to get underway around 1400. We had to make a big U- turn in the harbor and then we were off heading towards the ocean. Once we escaped the calm of the harbor we were in rougher water, and the boat would rise and fall and we all waited in trepidation to see if we would succumb to seasickness. We enjoyed watching the seals and sea lions sunning themselves on buoys as we passed by and looking back at the receding shore.

It was my first time on a research cruise and I was eagerly looking forward to all the science that was about to take place for the next few days. I was accompanied by the best of the people from my school for this adventure. It was everyone’s first time on a science cruise. Our initial worry was the struggle to keep up with the homework that we had been assigned when we were on the terra firma. Fortunately, our teachers understood the situation and gave us extensions on all of them. This meant that we could focus on the onboard activities. We were excited about keeping watches because there wasn’t much for us to do other than observing the instruments being deployed. Personally, I feel that my watch timings were the best, 12 noon to 8 pm, accompanied with two meals in between for a nice break. Other shifts were 8pm to 4am and 4 am to 12 noon.  On the first day when we went underway, I started feeling a little green around the gills by the end of my shift. So, I just went to bed and slept for straight 15 hours. Next day, I was ready to do my full watch and learn as much as possible. Starting with a Benchmark Bottom Pressure Recorder (BPR) being deployed early that day, it was followed by a lot of action for the remainder part of the day. We deployed more BPR and Current and Pressure Recording Inverted Echo Sounders (CPIES). Waiting for the benchmarks to be deployed all the down and then getting back the cable back was the slowest. All that was happening under water could be seen on a TV screen on different charts. The release of the heavy benchmarks was signified by a decrease in tension on the cable. Releasing the benchmark using the acoustic release method is probably one of the major advancements in science. Releasing a ‘knot’ at a depth by simply dialing a 6-digit code at a depth of 2000 meters has definitely made deploying benthic sensors an easy task. We weren’t involved in a whole lot of activities but simple tasks like untangling cables and throwing current sensors off deck was enough to get the science feel going for me. We understood the immense pressure at great depth when we attached styrofoam cups with CTD casts and the cups came back half their size.

While the rain gods helped by keeping out of way until science was done, they unleashed their wrath once we were transiting to Seattle.

The life on vessel was not what I had expected it to be. Initially all I could think of before getting on board was ‘Deadliest Catch’. But it is much more normal and homely. All the crew members were making their best attempt to make us feel welcome on board. We got a tour of the bridge, the engine room and few other big machines (that I could not understand). One things that surprised all of us was the food. It was better than what you could get on the collegiate terra. While there was a wide variety of food to indulge in, we also explored the vessel to find out the sauna, gym and recreational lounge space. I was culturally integrated as we viewed the American classic, The Matrix.

Our downtime was only upped by more science and card games (nerd alert: cards had Plate Boundary Observatory facts.)

As we head back to the solid ground mapping the oceanic unexplored depths of oceanum incognito, we only have more science to do and even more inspiration to do it.

We were given an opportunity by William Wilcock to join their research cruise, and I jumped right into it, not knowing what to expect of a research cruise. Well, I haven’t tried being at sea before, and now is a good time to test the waters. It’s nice that we are leaving from Newport, Oregon. I’ve only been here once for crabbing. The memories calmed me down from the uncertainty of what we are going to do.

The Sikuliaq is a great R/V. Food was good and abundant (ice cream for days), the lodging was surprisingly nice, and the crew was so welcoming. I guess it wouldn’t be so bad. I volunteered for a graveyard shift, running from 8 pm to 4 am. I got to be with Gerrard Hofmans. We are basically logging and helping in the deployment CPIES (Current and Pressure Recording Inverted Echo Sounder) and bottom-pressure benchmarks for this cruise. We are also documenting the process, and what it’s like.

We got out to the Pacific, and all was fine. I took a nap before my shift, and when I woke up, I felt queasy. I thought I can power through, but once I threw up, I had to rest. That was my first experience of seasickness. That was really rough. I really though I can handle the 5 degree rolls we were experiencing, and I was wrong. I had to nap again, thus missing 2.5 hours of my shift.

Our shifts were pretty laid back. As undergrads, we were not as involved, and it seems like the people from URI and Sonardyne has everything ready. There is a lot of downtime from waiting for the CPIES to reach the ocean bottom, and double checking whether they are collecting data, and doing CTDs with depth 2000-3000 m (at a rate of 30m/min). During the wait times, we got to talk to people on the cruise. I was surprised as to how they to just came to this line of work. I also got a glimpse of the life of an oceanographer, which just make me want to do it more. Also, we designed some Styrofoam cups and put it with the CTD.

This was such a great experience, bonding with my classmates, knowing more about this career path and profession, meeting the people from different kinds and background, and of course doing the science. As we now head back to land and start to worry about our land life, this was a nice change of pace. The experience was well worth it, and this peak into sea life is a valuable lesson for me.

The gentle chiming of my alarm yanks me out of my sleep. I hurriedly silence it, and take a moment to see if the intrusion woke my roommate, sleeping after his shift ended eight hours ago. There’s nothing but the creaking of the ship, and the gentle sounds of the rolling waves- the background music of our time aboard. I swiftly get dressed, grabbing my laptop as I stumble out the door into the brightly lit hallway, blinking away the last vestiges of sleep. Making my way downstairs I look for signs of life from the 8pm – 4AM shift.

They’re in the Technology Lab, a room festooned with computer readouts detailing the minutiae of the ship. Both watchmembers are intently watching a screen showing the path of an expendable bathothermograph (XBT) as it falls into the watery depths of the Cascadia subduction zone. After it hits the bottom, they give the order to cut the XBT off, and the launch crew retreats into the main lab to check the data.

The launch of the XBT signals the start of the final portion of our trip, the multibeam sonar scan of a particularly active section of the seafloor for seeps, bubbled pressurized gases that escape from the seafloor here. The hope is to find some especially active zones, and mark them for further investigation by a later cruise. Our portion of the cruise is over, we deployed the last pressure benchmark and CPIES overnight.

We didn’t get to directly assist with the deployment of the benchmarks, circular concrete slabs with a pressure sensor on top, but we’re eagerly awaiting the results that they bring. The benchmarks can measure pressure shifts in the seafloor, which will tell us more about the movement of the plates below. Learning more about the tectonic movement here, off the coast of the Pacific Northwest is especially important. These measurements will tell us how much movement the Juan de Fuca plate is experiencing, or not experiencing, as is the case. If large sections of the plate are not moving, the eventual earthquake that will occur from the release of those sections will be enormous in magnitude, with potentially devastating consequences for the Seattle and Portland metropolitan areas. At this point, we don’t know how bad it could get, but once we recover the data from the benchmarks we’ll have a much better idea.

The recovery won’t happen for a few months, we’ll need to give the benchmarks time to gather their data. For now however, I sit back watching the sonar results come in rocking gently with the boat as it carries us on. 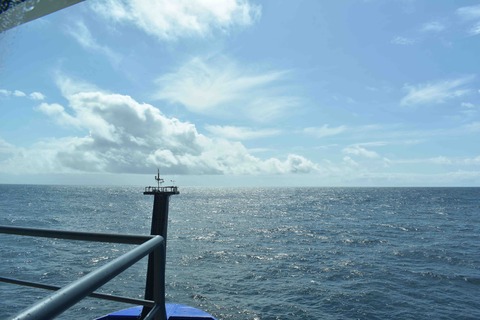