Test are underway for two types of tethered robots. 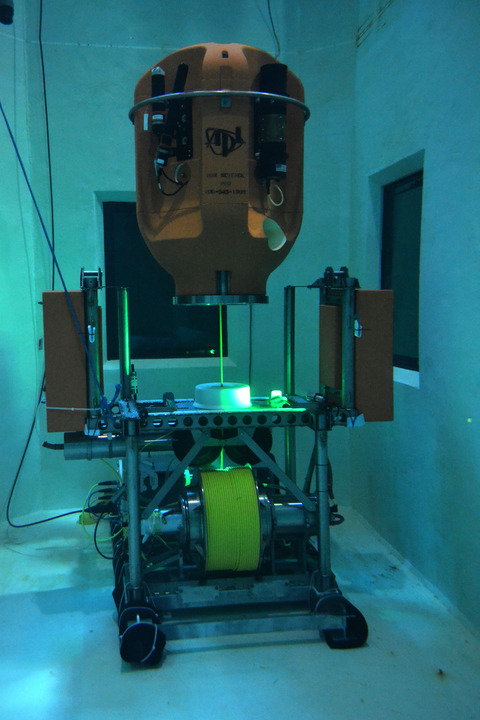 By having this infrastructure positioned vertically throughout the water column, we will have an unprecedented capability" Orest kawka

The University of Washington this fall will complete installation of a massive digital ocean observatory. Dozens of instruments will connect to power and Internet cables on the seafloor, but the observatory also includes a new generation of ocean explorers: robots that will zoom up and down through almost two miles of ocean to monitor the water conditions and marine life above.

Tests are underway for two types of tethered robot, one working at shallow depths and one in the dark depths, that will gather continuous, real-time data about the ocean environment. The robots are part of the UW-led cabled observatory, funded by a $239 million grant from the National Science Foundation and part of the national Ocean Observatories Initiative.

The tethered robots will be able to collect long-term observations and respond to events such as large storms or microbial blooms associated with underwater volcanic eruptions.

"By having this infrastructure positioned vertically throughout the water column, we will have an unprecedented capability to respond to oceanic events as necessary and to fine-tune our short-term and long-term observational strategies, all without going out there with a ship," said project scientist Orest Kawka.

The robots are now being tested at the UW campus in a saltwater tank and in a tank that can generate up to 10,000 pounds per square inch of pressure. Nearby at the UW's Friday Harbor Laboratories, a new seafloor test site is equipped with cables that supply power and broadband Internet to the robots so they can practice moving up and down to record temperatures, currents and other environmental variables.

Engineers at the UW Applied Physics Laboratory built the deep profiler. They added rechargeable batteries to an existing oceanographic tool that can normally only operate for a month and a half. The new version will dock weekly to recharge from a high-voltage seafloor cable, while using a short-distance wireless connection to upload each week's observations to the Internet.

While on the job, the machine carries sensors that record water temperature, salinity, currents, oxygen, chlorophyll and other chemical and biological data. Engineers modified the original so that it can carry eight instruments and added a more precise timekeeping system. They also added a piece built by a Bellevue, Wash., company that transmits information through the wire as it is moving, so that even while profiling it can send some status updates back to shore.

"It's a big, complicated project," said Tim McGinnis, an engineer with the UW Applied Physics Laboratory building the deep profiler. "It's a rare opportunity to work on a project of this magnitude, which is hopefully going to have a transformative impact on ocean science."

The deep system will operate from as much as 1.8 miles depth up to 300 feet below the surface. UW ocean engineers have already installed several similar profilers of this kind, McGinnis said, including one in even deeper water off the coast of Hawaii.

The shallow-water profilers, a custom system built by a team of four project engineers at the Applied Physics Laboratory, will operate nearby. The shallow profiler will move from two football fields below the surface to just below the influence of waves. It will carry an array of complex instruments through the depths sunlight reaches to support more marine life.

Home base will be a platform at 650 feet depth that holds stationary instruments, a high-definition video camera, and a winch that feeds cable up to the moving science pod. Two 2-mile-long legs will anchor the platform to the seafloor. One leg will carry electricity and Internet up from the seafloor cable. The other provides stability, with a quick release in case the system needs an emergency recovery.

From his office at the UW, project engineer Eric McRae recently monitored the Friday Harbor tests. Crabs scuttle by the docking station, and a real-time video shows that the cable is spooling correctly on the drum. Unlike the deep system, the shallow profiler will have electricity and Internet running continuously to the instruments. Data pouring from the instruments reaches shore within a second.

"Typically these profilers just stored data, and every couple of months you'd have to go out, pull it off the wire, take it up to the surface and get the data out," McRae said. "In our case, the instruments are connected real-time to shore, and we can see the data from them instantly."

If the data show something interesting – a geothermal plume coming off the volcano, say, or unusual material floating near the surface – scientists can override the robot's instructions to investigate further.

Engineers tested the shallow profiler for two months before bringing it back to the lab in March to check for wear on bearings and other moving parts in preparation for the first year-long deployment.

"I think once people see the data streaming, they are going to be pretty happy," McRae said.

After the prototypes have been put through their paces engineers will build two more robots of each type. They will be installed this year in shallow water off Newport, Ore.; in deep water farther offshore; and at the base of an underwater volcano 300 miles off the Oregon coast.

Next year engineers will build three more, placing one set in the water while the other set is refurbished on shore. Anchors and cables will be replaced every five years during the observatory's projected 25-year lifetime.

Scientists, engineers and students will be at sea from July to October to finish installation of the high-tech facility, which will be the world's largest Internet-connected ocean observatory. It is scheduled to begin operating in 2015.

By having this infrastructure positioned vertically throughout the water column, we will have an unprecedented capability" Orest kawka

As a member of this oceanographic expedition and class, you will be taking part in the installation of the first U.S. high-power and high-bandwidth regional cabled ocean observatory.