The Cover Story of Discover Magazine

What's at the bottom? We're about to find out. 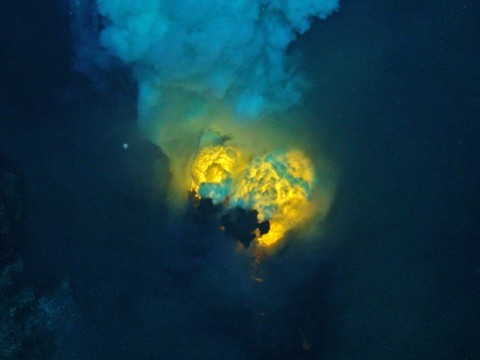 A double magma bubble, about 1 ½ feet across at its base, emerges from the vent that scientists named Hades at the West Mata volcano. (NSF/NOAA)

The cover story by Jennifer Barone of the June 2012 issue of Discover Magazine features the inspiration for the Ocean Observatories Initiative (OOI).

John Delaney stepped out onto the deck of the Thomas G. Thompson shortly  before dawn one day last August and paused to look at Puget Sound, an evergreen-lined inlet near Seattle that meanders out to the Pacific. As the ship made its way toward the ocean, he glanced at the white peaks of the Olympic Mountains with a knowing eye. “Those rocks were created on the seafloor, distilled from molten material from the mantle,” he said. “They were part of a tectonic plate that got jammed up onto the continent.” He watched as the glassy, protected waters of the sound gave way to ripples and sparkling wavelets, hints of the interplay between wind and sea and the currents that course around the globe. He registered the sun on the water and pondered the patterns of energy fueling the blooms of tiny marine plants that nourish an ever-expanding web of life. Every facet of the ocean conjured another, weaving a tapestry so complex he knew he would be studying it for the rest of his life.

To unravel that intricate tangle of relationships, Delaney has envisioned a web of his own: a sprawling undersea network off the coast of Washington and Oregon whose strands of power lines and fiber-optic cables would stretch hundreds of miles along the seafloor, connecting researchers with the ocean like never before. On this expedition, Delaney was setting out to test key components of the system for the first time. And this deep-sea Internet is just one arm of the enormous $770 million Ocean Observatories Initiative (OOI) now under way.

For more about OOI visit:

What's at the bottom? We're about to find out.

A double magma bubble, about 1 ½ feet across at its base, emerges from the vent that scientists named Hades at the West Mata volcano. (NSF/NOAA)

UWTV to Air "Down to the Volcano"

Explore an underwater volcano with UW oceanographers as they use the ROPOS ROV deployed from the R/V Thompson.

Welcome to the first issue of Ocean Currents, our new on-line magazine that spotlights research and educational activities of the School of Ocean

It appeals to the adventurer in us all. Imagine exploring hidden volcanic mountain ridges as expansive as the Cascades on a distant frontier near

If two years ago, Katherine Turner and Carlos Javier Sanchez had been told that they would speak at an international scientific conference, they