The road to world competition for underwater robots 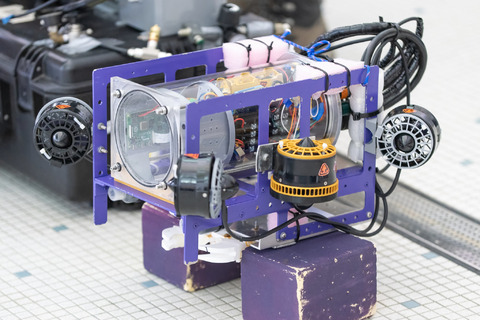 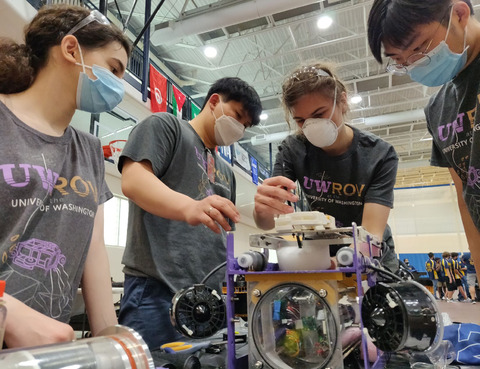 A clear tube crammed full of electronics, protected by a purple cage studded with thrusters, traveled from Seattle to Tennessee to compete with underwater robots from all over the world in the MATE ROV World Championship Competition. This particular robot, named Nautilus, is the result of three years of work from the Underwater Remotely Operated Vehicles (UWROV) team at the University of Washington. This club, partly housed in the School of Oceanography as a collaborative effort to bring together students from the College of the Environment and College of Engineering, teaches members how to build underwater robots from scratch — everything from the basics of robotics to building software and even product marketing and outreach.

“Building underwater robotics is a really interdisciplinary project,” says current UWROV president Peyton Lee. “We need to think of the applications for the robot outside of just building it. How does it relate to real-world problems? Building an underwater robot requires knowledge of power systems, propulsion, physics, software engineering, marine biology and more. This club is really neat because we get to bring in many different students and there are many ways to contribute to the club. No matter what someone is studying, there will be opportunities for them to get involved.”

The club prides itself on this beginner-friendly aspect. Anyone who has an interest in robotics is encouraged to join, as most of the current members started off with limited experience but lots of enthusiasm.

“I joined because I really connected with the amazing role marine technology could play in conservation,” says business team leader Leah Davis. “I had no experience with business or engineering in the beginning, but over the course of the year I learned how to handle marketing and all of the community outreach and sponsor engagement. This year, I will be the lead of the business subgroup. There are so many things to explore on the business side of this club, and even if you don’t have experience yet, the business subgroup could be an amazing fit for you.”

As with the rest of the world when the pandemic hit, the club had to rethink the recruitment and outreach process.

“Last year with everything remote, it was both a really big challenge to communicate with people and a huge opportunity to reach people who might not have attended in-person events,” said Lee. “We held virtual lab tours and info sessions, and put that information in as many places as possible. We also sent out communications to different mailing lists, and tried our best at being really communicative, staying organized and being clear about ways to get involved. We emphasized that we’re a beginner-friendly team and that our focus is more on building skills, rather than expecting that you join already knowing all the skills.”

After a successful recruitment season resulted in around 30 new members, the UWROV leadership team needed to start training those newcomers up. This required close coordination with the School of Oceanography and College of the Environment, with a careful eye towards ensuring all UW health and safety policies were followed. Now-former club president Daelyn Bergsman worked with School of Oceanography Director Rick Keil and team advisor Rick Rupan to secure permission to work on campus, determine safe lab capacity and work through other logistical concerns.

“It was really important that we try to be able to go into the lab and build the robot,” said Bergsman. “We weren’t able to get into the lab until December, and we were only able to have one to two people there at any given time, sometimes even in separate rooms. Luckily, we were still able to build the components we needed. The physical part was challenging because we still had to teach people how to do it. A lot of the trainings were still in person and hands-on, while masked and six feet apart and making sure everyone was vaccinated in spring. We held Zoom trainings for the design side for the first couple months, but visualization is hard without a physical example so getting in person was key to hammering in fundamentals.”

User interface lead Andrew Jang and software lead Peter Gunarso spent three months setting up virtual tutorial projects to get new members familiar with the software development environment. The leads updated many of the ROV’s systems, including migrating to ROS (the Robot Operating System), the industry standard for professional robotics.

The road to the MATE World Championships was a long one that started prior to the pandemic.

“We were so excited to apply to MATE after not competing for six years,” said Lee. “We had to cancel in-person meetings after everything started shutting down, which was a huge setback and so disappointing. Getting accepted into Worlds was incredibly exciting, and it was the culmination of three years of effort. All of the late nights and weekends we spent in the lab were finally worth it.”

The application process involved submitting a video demonstrating robot functionality. The theme of Worlds 2021 was focused on environmental conservation, requiring the team to demonstrate their ROV’s ability to navigate simulated coral reefs and clear plastic debris from the ocean floor. MATE also emphasized the importance of documentation and communication, and the team submitted a 25-page document outlining their ROV’s development, the team’s safety and COVID policies, and the volunteer outreach done on behalf of the team. The competition also sought to build student skills in marketing and presentation, with Davis leading the development of a marketing display that communicated the robot’s features to potential customers.

Unfortunately, rough waters greeted the UWROV team when they arrived in Tennessee for the competition. “The competition was interesting because we were putting out one fire after another,” said Gunarso. “First, two of our motor mounts broke off in transit and we didn’t have any spares, so we had one hour to engineer a fix using just what we had on hand. The next day wasn’t any easier. We found a bug in the software that didn’t show up in testing, a malfunction in our tether which effectively halved our power output, and nearly all the nuts in the pressure hold came loose … despite all these setbacks, we were determined to have a working ROV which resulted in a four-hour session one night just trying to troubleshoot all these issues. The lab space was closed for the night, so we had to haul the ROV about a mile back to the dorms, where the seven of us were on the floor trying to diagnose and fix all the issues. It was definitely a very stressful time, but I’m really proud of the team and how much effort they put in, not to mention the snap-second engineering and reacting when things go wrong. I think the judges picked up on our communication skills and the fact that we created an encouraging and positive space to work together and resolve issues.”

Despite all the technical issues that arose, the team stuck together and persevered. Out of 25 teams, UWROV placed third in the machine learning satellite challenge (first among US teams) and sixth overall in the in-person, college-level division. Most importantly, says Lee, “we know what to expect. Our goal last year was to qualify for Worlds, and we met and surpassed our expectations. This year, we’re going to apply what we’ve learned to increase our engineering quality, build more robust systems and push the boundaries of our oceanography engineering skills, creating solutions to real world problems. We’re looking forward to another exciting competition season.”