I took my first oceanography course as a senior in high school...I am finally out at sea on board the ship that I have always admired from shore.
- Charlie Parker 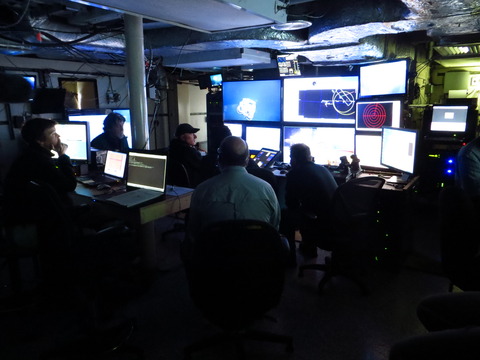 VISIONS '13, Leg 2 student participant, Judy Twedt, in the ROV Control Room where she sits behind the ROPOS pilots, scientists, and engineers as she logs and archives the events of the dive.

For over two decades, the University of Washington has enabled at-sea experiences for undergraduate and graduate students through participation in oceanographic research cruises. As part of this continuing commitment, the UW is providing 15 days of ship time per year to the regional cabled observatory component of the National Science Foundation’s Ocean Observatories Initiative. This UW-led effort has designed and is now constructing the first U.S. regional cabled ocean observatory, a 575-mile network of fiber-optic and power cables with 31 different types of instruments in the northeast Pacific Ocean. Construction began in 2009 and completion is scheduled for early 2015.

On board the R/V Thomas G. Thompson, undergraduate and graduate students work alongside scientists, engineers, ROV operators, and members of the ship’s crew to learn about all aspects of seagoing research, ship operations, and life aboard an oceanographic research vessel. As cruise participants, students develop projects around the use of robotic vehicles, mapping, and linkages among geological, biological, chemical, and physical oceanographic processes. Students share their experiences with the public through daily blogs.

The OOI VISIONS '13 cruise in summer 2013 continued the tradition of taking students to sea. A total of twenty undergraduate and graduate students—with a variety of academic backgrounds that ranged from electrical engineering to atmospheric sciences, oceanography, and art—participated in the four legs of the expedition. Students registered for Ocean 411 and instructors were Professors of Oceanography John R. Delaney and Deborah S. Kelley, who were also Chief and Co-Chief Scientist, respectively, for VISIONS ’13.

During the students’ time at sea they learned about all aspects of seagoing activities associated with construction and deployment of the cabled observatory, including standing watches in the ROV ROPOS control room and assisting with on-deck work.

6 July 2013, Claire Knox: “One of my favorite things to do aboard the vessel is to watch the video feed of the ROV camera when diving. While it is fun to watch on the main lab television, the best view is from the back of the ROV control room. Standing in the back you can take in the complete scene with all of the screens ablaze and the scientific dialogue being tossed around the room.”

23 July 2013, Marisa Gedney: “...acronyms are arguably quite necessary in the scientific and engineering communities, and in the realm of oceanography the use of the letter "O" is quite common (OOI, IOP, OIP, SOS…). But I can’t say that I was quite prepared for the random letter usage of this cruise. For example, when I was on watch this morning we deployed the ROV ROPOS with ROCLS to lay the ECALW3 at the MJ03E in the PN3B region while I logged events on IRLS using the DSC. At least we didn’t also need the RIB.”

6 August 2013, Charlie Parker: “Four years ago is when it all changed. I took my first oceanography course as a senior in high school. During the very first hour of class I knew I needed to have ocean research in my future. After being accepted to UW, I could not wait to be a part of all the opportunities I had seen while researching it. Well, I am finally out at sea on board the ship that I have always admired from shore.”

I took my first oceanography course as a senior in high school...I am finally out at sea on board the ship that I have always admired from shore.
- Charlie Parker

VISIONS '13, Leg 2 student participant, Judy Twedt, in the ROV Control Room where she sits behind the ROPOS pilots, scientists, and engineers as she logs and archives the events of the dive.