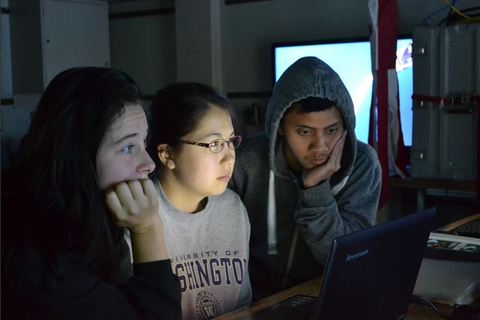 The students put in really long hours. But they were all surprised at how fast two and half weeks flew by. Deb Kelley 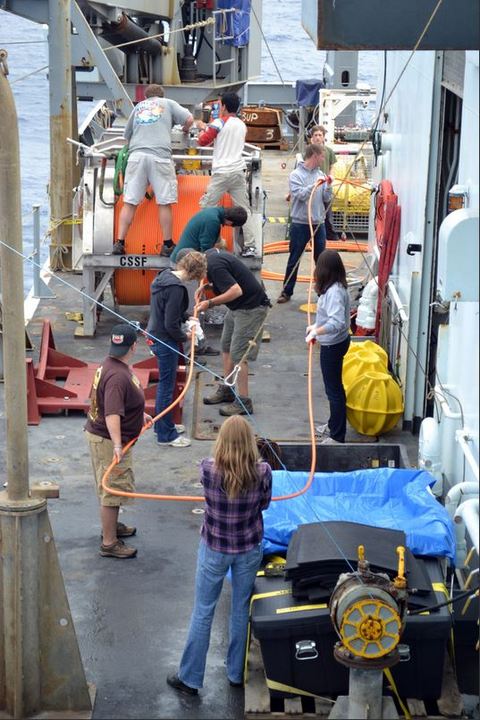 Throughout the 83-day expedition, groups of UW students have each spent two weeks or more working aboard the UW’s large research vessel, the Thomas G. Thompson.

Around 45 students, mostly undergraduates, are participating. Most are taking the Ocean 411: Seagoing Research and Discovery course, which has them working with scientists, engineers – and a specialized robot called ROPOS that installs cables, power and communication hubs, and instruments on the ocean floor as part of the observatory construction phase.

By the time the expedition wraps up the team will have installed tethered robots that zoom up and down 9,000-foot-tall cables while measuring chemical and biological properties throughout the ocean dephs, lain thousands of fee of extension cables and installed 150 instruments on the ocean floor and in the water off Oregon and Washington.

Chief scientist and co-instructor for the class Deborah Kelley recently got back to Seattle after six weeks at sea. “The students put in really long hours,” Kelley said. “But they were all surprised at how fast two and half weeks flew by.”

“It was a nice mix,” Kelley said. “The engineering students spanned everything from students who are interested in corrosion, to mechanical engineers to chemists.” Students from different disciplines helped one another, just as in the science and engineering research teams, she said. Oceanography students might teach about the biology, and computer science students would help with programming or data visualizations.

This summer’s work completes initial installation of an ocean observatory that will bring power and high-bandwidth Internet to the deep ocean, providing a real-time, virtual eye on the deep sea and the ability to directly interact with the ocean 24/7. Still aboard the ship is principal investigator and co-instructor John Delaney, a UW professor of oceanography and chief scientist on all legs of the cruise.

Each student also worked on a project, many related to public outreach. Some created multimedia information pages about the technology, complete with interviews with the creators and video of it being deployed. Others described the seafloor animals observed during the installation, which will be available as a biological catalog for the study sites.

Some students created mini-documentaries, including one about the extreme environment at a deep-sea volcano. Another explains a thermal probe that’s inserted into deep-ocean vents spewing fluid more caustic than battery acid and hotter than boiling water.

The Tommy Thompson, as the UW ship is commonly known, is an educational vessel where the crew members teach students about the ship’s operations. Students also help out, when safe, with deck work such as hauling equipment and spooling cables.

For scientists and the public, the new observatory will soon provide real-time data on offshore earthquakes, mysterious deep-ocean ecosystems, and many more observations on processes such as ocean currents, warming temperatures and ocean acidification.

The students put in really long hours. But they were all surprised at how fast two and half weeks flew by. Deb Kelley

Unlocking Secrets of the Ocean

UW new web site put the spotlight on the oceanography students working aboard the Thomas G. Thompson, during an 83-day expedition.