R/V Clifford A. Barnes will head out for the 1000th time. 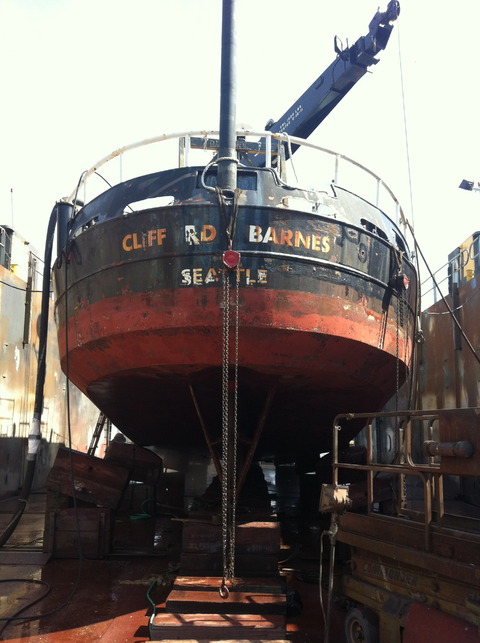 Doug Russell / UW
The Barnes in dry dock. The boat will be decommissioned in 2016. 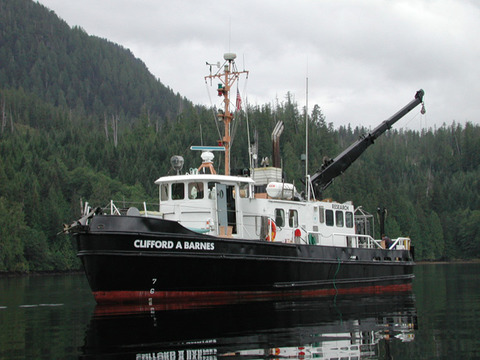 By Hannah Hickey
News and Information

This week, the rusty but reliable Research Vessel Clifford A. Barnes will head out for the 1000th time as a University of Washington research boat, carrying scientists and students to explore what happens beneath the surface of Puget Sound.

It’s a landmark trip for the vessel that has spent almost 30 years taking people from the UW and elsewhere out to the Sound, the Olympic Peninsula and nearby coasts to make discoveries about chemistry, currents and marine life.

All this from a boat that even its biggest fans admit has serious drawbacks.

The boat was never built to go into open seas, and adding 10 tons of scientific equipment to the stern did not help with stability issues.

(McQuin has a naturally strong stomach, he said, and suffers from seasickness only a couple of times each year.)

The scientists’ berths, two sets of triple bunks that hang from chains, make the undergraduate dorms seem plush by comparison. There’s only one bathroom and shower. And a 100-square-foot room serves as kitchen, dining room, common area and recreational room for up to six researchers (15 for short trips) and a two-person crew.

But most noticeable are the small scientist quarters, which were squeezed on after the fact. The small room is jam-packed during cruises with people, laptops and science equipment.

“It’s very — personal,” said Ginger Armbrust, professor and director of the UW’s School of Oceanography. Others describe it as “crowded” or even “controlled chaos.”

The vessel was built in 1966 as a U.S. Coast Guard inland harbor tug that spent years towing boats, quenching fires and doing light ice-breaking out of Bellingham and Alaska.

The UW acquired the 65-foot boat at a bargain price in 1983 and converted it, replacing the original transmission with one that will go at the slower speeds needed for research, attaching a winch to lower instruments into the water, and adding a science cabin.

“It’s not a purpose-built research boat. There are a lot of compromises, but we get the job done,” McQuin said. “It’s a work boat, and that’s what we need.”

Logbooks show that in recent years, the Barnes has been out studying nitrogen near Neah Bay, algal blooms, marine food webs, effects of the Elwha Dam removal, and oxygen levels in Hood Canal.

The 1000th cruise will be a series of half-day trips May 7-9 from Shilshole Marina for Oceanography 201, an introductory lab course that lets students take oceanographic measurements.

“For oceanography majors, getting out on the water early is really important,” said instructor Susan Hautala, a UW associate professor of oceanography. “It gives students an idea of both what oceanographers do, and of why oceanography is so challenging: It’s taking limited measurements in a highly variable environment, and trying to piece together bits of evidence.”

The boat’s namesake, Clifford A. Barnes, was a UW alumnus and professor of oceanography from 1947 to 1973 whose publications include “Circulation near the Washington Coast” and “An Oceanographic Model of Puget Sound.”

The millennial cruise will be one of the last for the vessel, which is nearing the end of its lifetime. The National Science Foundation will decommission the boat in 2016.

“You reach a point – and we’re getting there with this boat – where you can’t afford to keep it running. There are too many repairs,” McQuin said.

Plans are already under way to find a replacement. The School of Oceanography is looking for grants and private donations to fund a new vessel. Jensen Maritime Consultants created a custom design for an 86-foot vessel that would have more than four times as much lab space, carry twice as many people, and include modern navigation capabilities.

“The Barnes has been an incredible resource both for monitoring and understanding Puget Sound, and for giving our students an opportunity to do hands-on research, which is a core part of our program,” Armbrust said. “We’re looking forward to getting a new ship that will allow us to do this and more.

”The article in UW_Today can be found here.

Doug Russell / UW
The Barnes in dry dock. The boat will be decommissioned in 2016.

The Captain of the BARNES, Ray McQuinn, reported that on day two of their University of Washington and NOAA sponsored science mission, they disco

Port Facilities and Vessel operations topics include policies and procedures that apply to UW vessels, directions and information about the UW dock, and...