The goal of this project is to understand the uptake of carbon, specifically carbon dioxide, in the Southern Ocean. Stephen Riser 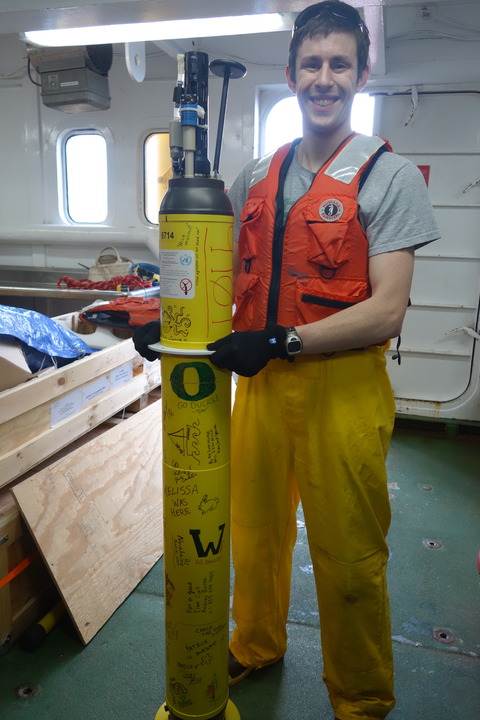 UW graduate student Tyler Hennon holds a UW-built float before releasing it into the Southern Ocean earlier this year. It will measure the top 2,000 meters (1.24 miles) of the Southern Ocean for the next five to six years. Photo Credit, Nicholas Huynh / UCSB

If historic explorer Ernest Shackleton were recruiting for the job, he might point out the bitter cold, long hours of complete darkness, danger and eventual "honor and recognition in event of success." This time the call is not for men to trek across Antarctica, but for robotic floats built at the University of Washington to brave the world's harshest ocean to help understand its role in the global climate.

The Southern Ocean, or the seawater that encircles Antarctica, soaks up half of the carbon emitted by humans and is thought to have absorbed much of the planet's excess heat in recent decades. Yet, the inner workings – and global importance – of the waters that account for 30 percent of the world's ocean area remain relatively unknown to scientists, as observations remain hindered by dangerous seas.

The U.S. National Science Foundation this week announced a $21 million project to measure and model this region's role in the climate. The six-year Southern Ocean Carbon and Climate Observations and Modeling program is headquartered at Princeton University and the UW is among 10 partner institutions.

"The goal of this project is to understand the uptake of carbon, specifically carbon dioxide, in the Southern Ocean," said Stephen Riser, a UW professor of oceanography. "I hope we can understand that better and see exactly where that's happening, and why."

Central to the project are roughly 200 floats, nearly all to be built in the UW's Ocean Sciences Building. The UW team will build the instruments from commercially-available components and add research sensors, checking the performance and testing each instrument in the lab and at sea.

The UW lab already has built more than 1,400 similar floats for the Argo program, an effort to equip the world's oceans with mechanical swimmers that can dive 1 mile below the surface while recording temperature, salinity and ocean currents. Almost one-third of the instruments deployed since 2001 for the international Argo program were built at the UW.

The earlier Argo floats focused mainly on the physics of the seawater. The new model adds biological and chemical monitoring.

The sensors to be deployed in the Southern Ocean will record oxygen, nitrogen, acidity, chlorophyll and carbon, which will help measure the growth of tiny organisms thought to help soak up carbon from the air.

These new floats will increase the monthly data from the Southern Ocean by 10 to 30 times compared to present levels, said principal investigator Jorge Sarmiento at Princeton.

"The scarcity of observations in the Southern Ocean and inadequacy of earlier models, combined with its importance to the Earth's carbon and climate systems, means there is tremendous potential for groundbreaking research in this region," Sarmiento said.

The first cold-water test of the new mechanical explorers took place in January during an eight-week cruise south of Australia. Tyler Hennon, a UW graduate student in oceanography, deployed 12 instruments for a successful test run.

In early October the first 16 floats to be deployed as part of the project will be shipped to Cape Town, South Africa. Those instruments will be released in December by a German ship, the Polarstern, conducting research in the Weddell Sea.

"It's exciting that it's starting pretty soon now," Riser said. "Three months from now these will be bobbing around in the Southern Ocean."

The project will deploy 25 or 30 more instruments each year for the next six years. When the instruments surface they will beam back data to a publicly accessible database.

For more information, contact Riser at 206-543-1187 or riser@ocean.washington.edu. Riser is in Princeton for a project meeting and will be back at the UW on Friday, Sept. 12.

Parts of this article were adapted from a Princeton news release.

The goal of this project is to understand the uptake of carbon, specifically carbon dioxide, in the Southern Ocean. Stephen Riser

UW graduate student Tyler Hennon holds a UW-built float before releasing it into the Southern Ocean earlier this year. It will measure the top 2,000 meters (1.24 miles) of the Southern Ocean for the next five to six years. Photo Credit, Nicholas Huynh / UCSB

The expedition is two thirds of the way through a month-long voyage from Punta Arenas in southern Chile to McMurdo Station in Antarctica.

Take a virtual voyage to the Arctic ocean

Most estimates of ocean warming have been limited to the upper 700 meters of water, however, the ocean is also warming near the bottom, in the coldest waters of the abyssal zones.

The coldest deep ocean water that flows around Antarctica has been mysteriously disappearing at a high rate over.