High-resolution mapping can characterize things to a level that you can look at new questions. Emily Roland 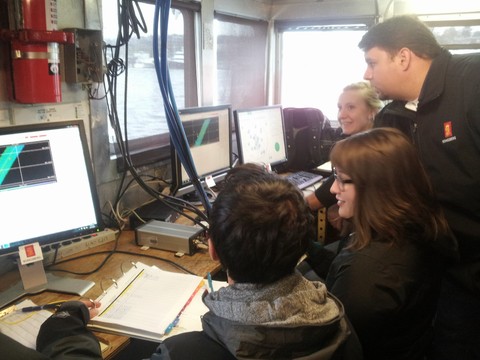 Engineer Tony Dahlheim and students look at the data.UW

Below the kayakers, seaplanes and construction cranes in Seattle's Lake Union lie unseen relics of the city's history. Shipwrecks from past generations rest just below the busy surface.

University of Washington students in a senior-level seafloor mapping class got the chance to do a hands-on lab. They were among the first people to get to try the latest in sonar mapping technology – and used it to map a WWII-era vessel.

"This course is all about data acquisition, about how to acquire seafloor data," said instructor Miles Logsdon, a UW senior lecturer in oceanography.

The technology was provided by Kongsberg Underwater Technology. The Norwegian company's U.S. headquarters for underwater systems has a close relationship with the UW – its sonar is on the UW's large research vessel, and the Lynwood, Washington office recently acquired the commercial license for the UW-developed Seaglider swimming robots.

Company field engineers set up the new shallow-water sonar last week on the UW's Clifford A. Barnes research vessel. They then spent two days showing groups of four students how to use the system that markets for six figures and is installed on just a handful of U.S. ships.

Casting off from the UW oceanography dock, it takes less than half an hour to cross the lake. On the way, Lake Union's bottom is relatively flat and uncluttered. Objects, mostly rocks, pop out on the screen.

The highlight of the trip is seeing the Gypsy Queen, a wooden minesweeper built in 1941 and then turned into a private yacht. It now rests about 25 feet below the surface just offshore from Amazon's headquarters in South Lake Union.

No pirate talk or jokes about maritime treasure took place among the four undergraduates, two engineers and two instructors onboard. Conversation instead focused on instrument calibration, beam direction and data-processing software. Getting a crystal-clear image from reflected sound waves, taking into account global positioning satellites and resolving boat motion takes some effort, even on the relative calm of Seattle's urban lake.

"The ship could be rolling, moving side to side, up and down, and still this system provides high-precision seafloor maps," Logsdon said.

Once students process the data, they should get some of the most detailed 3-D images of the Gypsy Queen. The only way to get a clearer image would be to put an underwater camera on a tripod on the bottom of the lake.

Researchers are among the target users for the new system.

"High-resolution mapping can characterize things to a level that you can look at new questions," said Emily Roland, a new UW faculty member who studies marine earthquakes and was helping out with the trip. "It opens the door to observing new processes."

The sonar could show sand waves on the seafloor up to hundreds of feet deep. If you mapped a location then repeated the scan with all the same settings, the new system could detect a change of less than 1 centimeter (about half an inch).

Scientific questions would be looking at how currents move sediment on the seafloor, or how marine earthquakes dislodge the sediment. The sonar also bounces off small objects and bubbles in the water, so it can image methane spewing up from pockets in the ocean crust, or currents flowing at different depths. Other applications might detect changes in the seabed that supports eelgrass, kelp and fish migrations, Logsdon said.

A week earlier, the seafloor mapping class took an overnight trip on the UW's Thomas G. Thompson. There they used the deep-water sonar on the large research vessel to image the seafloor off Whidbey Island. That system uses longer wavelengths of sound to penetrate deeper, but can't get the same resolution as the shallow-water system.

"These images are a lot more intricate and detailed than what we saw on the Thompson," said Una Miller, a UW senior in oceanography.

For the rest of the fall quarter the students will take the data from the two sites and use it to create their own maps of what lies below Puget Sound.

"At other schools undergraduates don't get the opportunity to go out on boats," said Don Setiawan, a senior in oceanography. "It's nice because you get hands-on experience, and see what it means to be an oceanographer."

High-resolution mapping can characterize things to a level that you can look at new questions. Emily Roland

Engineer Tony Dahlheim and students look at the data.UW

Developing qualified ocean surveyors for the marine geospatial workforce requires an educational opportunity that goes well beyond the limitation of classroom and laboratory exercises.

Seafloor Mapping: an Introduction to the acquisition, processing, and analysis of multibeam sonar data used in mapping seafloor